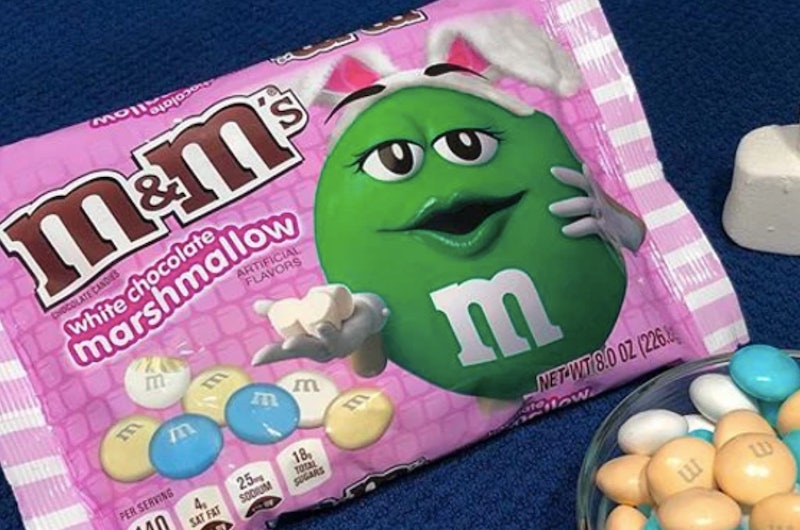 Valentine's Day candy will be haunting drugstores and supermarkets for a few more days (time to stock up on Reese's Hearts, if there's any left!), but Easter candy is on its way fast. And, as reported by Best Products, there's a new M&M's Easter flavor this year: White Chocolate Marshmallow.

As noted by Best Products, the candy was spotted by one of the people behind the Instagram account mnmtwins. Their handle might suggest that they only post about M&M's, but the food account is about all sorts of candy and snacks, and @mnmtwins is a reference to the fact that the account is run by twins named Marcus and Matthew. One of them saw the candy while working at Target.

White Chocolate Marshmallow m&m’s are silently hopping onto shelves soon! While working at Target last night, boxes of these came off the truck out of nowhere. Said "Display immediately" on the box, but the Valentine’s aisles aren’t quite cleared yet, so it’s only a matter of time before these begin being stocked.

The M&M's are not available on the Target website yet, nor do they seem to be for sale anywhere else online at the moment. Thankfully, Marcus and Matthew tasted the M&M's and provided a description. According to them, the white chocolate flavor is strong with only "the slightest hint of marshmallow."

In fact, if we were trying these blindfolded, we would guess white chocolate way before guessing marshmallow was also in it. But that’s just us! Can’t wait to see what other people’s thoughts are on these.

The twins also provided a photo that shows the candies are white, blue, and yellow, and that the inside is pale yellow.

The M&M's sound sort of similar to a flavor the brand released for Valentine's Day. This year, White Cheesecake M&M's returned for the holiday, and also came in three pastel colors. The flavor was described by a PopSugar taste tester as a "distinct white chocolate flavor cut with a tart, cream-cheesy finish." This variety was pretty divisive, though, so maybe the new White Chocolate Marshmallow ones will be more universally successful.

Outside of the U.S., there are other new Easter products aside from the White Chocolate Marshmallow M&M's. If you live in Australia, you can try a Hot Cross Bun flavor that is said to combine milk chocolate and cinnamon. In the U.K., M&M's Eggs — chocolate covered with a speckled hard shell — are being released for the holiday.

But if you are in the U.S. and want to try the White Chocolate Marshmallow flavor, take a look around the next time you're at Target. Or just keep a look out anywhere as soon as the Valentine's Day treats are gone. Easter is April 21, but that candy is going to be hitting shelves soon.