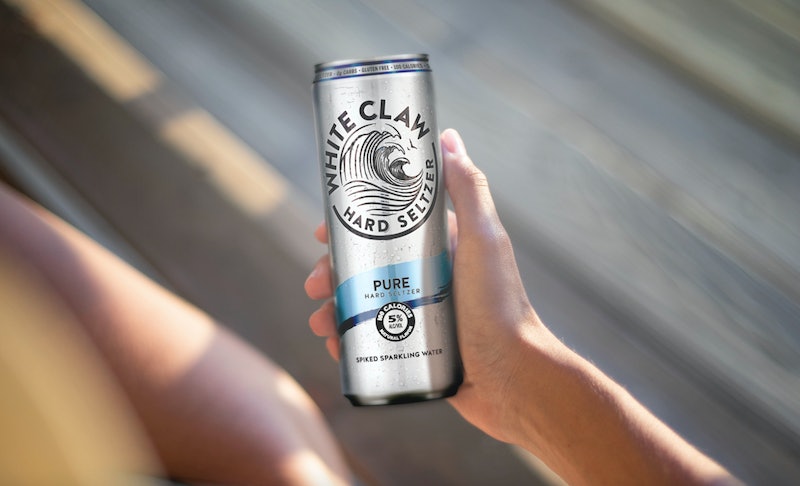 The hard seltzer gods and brunchtime lords have convened and decided we, as a species, are ready for the peak hard seltzer era. They have spoken it into existence and so it shall be: White Claw is officially a brunch drink. Do we take it as a blessing? Do we read it as a curse? Is this a hard seltzer pox upon our brunch house? Have you already left to make a reservation for Sunday?

As Eater reports, a new brunch-focused restaurant in North Austin called The Breakfast Bar is open for business and business includes White Claw cocktails. In addition to your beers, your wines, your myriad mimosas, The Breakfast Bar’s brunch menu includes an Italian soda cocktail made with White Claw. It is a brunchtime cocktail for the post-Saturday rager bros and late20-somethings who get a hangover from so much as looking at a sugary drink. A White Claw cocktail is a cocktail for the people.

If you are new to the church of White Claw, welcome. All are invited to imbibe on The Claw. No genuflecting is required like with our Smirnoff Icing of yesteryear. Nay, here we are invited to lay poolside, only moving our bodies to crack open another can of The Claw. In some cases, the pool is metaphorical or refers to the pool of fellow adults also drinking what is essentially spicy water.

As what many have dubbed The Summer of Hard Seltzer comes to an end, the rise of The Fall of White Claw Brunch begins. Chances are good that you won’t have to venture far in your Sperrys to find a brunch menu with White Claw or its hard seltzer brethren near you. There are bars in Houston that serve White Claw cocktails. There’s D.C.-area called The Lot that told Eater it sells “around 200 to 300 cans” of the clear stuff on a busy night. If you’re in Chicago, there’s even a doughnut shop called DonutSlut, a very “brunch-meets-White Claw” name, selling White Claw-flavored doughnuts. Unfortunately, if you’re looking for baked goods with an ABV, you’ll have to dunk your doughnut into a can yourself—the White Claw saints will guide the impossible physics of that somehow.

Earlier this year, White Claw was a sponsor of the Kentucky Derby. The Kentucky Derby is, of course, the brunch of sports. While there was no word of Claw-spiked Mojitos, fans at the Derby could purchase a 16-ounce can of White Claw Black Cherry $12, which is a little less than the price of your average 12-pack of White Claw.

In September, White Claw sponsored a brunch event in Boston. It featured drinks like the “It's Lit Spritz” (Aperol and Mango White Claw), the “FOMO Mule” (Vodka + Ginger Liqueur + Lime White Claw), and the Hundo P Paloma (Tequila + Lime Juice + Grapefruit Juice + Ruby Grapefruit White Claw). You could easily recreate these drinks for your at-home brunch if you don’t want to go through the humiliation of saying, to another human being, “Yeah, I’ll have the Hundo P Paloma.”

Our collective love of White Claw is not just the stuff that memes are made of. While the overall hard seltzer industry has grown, White Claw, in particular, has seen rapid growth this year, with a 283% increase in sales over last year in July alone. This has lead to what I can only describe as an alcoholic tragicomedy: There is a legitimate White Claw shortage.

"We are working around the clock to increase supply given the rapid growth in consumer demand,” Sanjiv Gajiwala, White Claw's senior vice president of marketing, told CNN Business. “White Claw has accelerated faster than anyone could have predicted.” So, if you can snag one at brunch, pour one out for your fellow Claw-less bros. (Just make sure you pour it into another glass. Claws are precious, my guy.)

More like this
Starbucks Released New Menu Items For The Summer
By Emma Garza
A Beginner's Guide To Drinking Whiskey
By Alexis Morillo
How To Make The Watermelon, Feta, & Mint Salad Trending On TikTok
By Emma Garza
Are Cancer & Scorpio Compatible In A Relationship?
By Kristine Fellizar and Mackenzie Sylvester
Get Even More From Bustle — Sign Up For The Newsletter