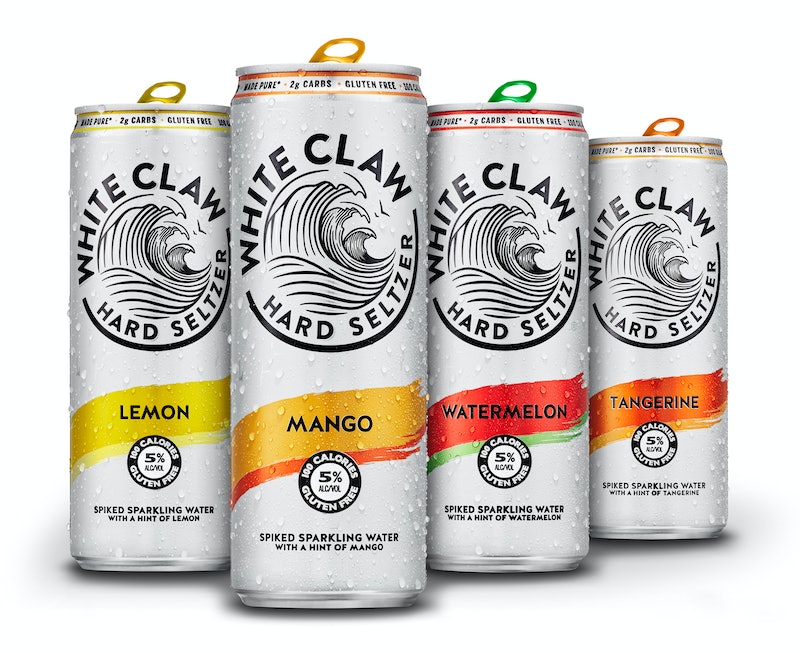 If you're a fan of spiked seltzer who is counting down the days until it's warm enough to bring a few cans of White Claw to a relaxing picnic on the beach, I've got good news for you: White Claw is adding three new flavors to its collection of beloved spiked seltzers — watermelon, lemon, and tangerine. The new flavors hit shelves on Thursday, March 5, just in time for spring — and will be sold as individual cans and as part of a new variety 12-pack, which also includes their best-selling mango flavor. So yes, this means you can run to your favorite liquor store and pick some up right now, if you please.

These thirst-quenching flavors were chosen by White Claw fans themselves, based on tens of thousands of online requests, according to CNN. These also happen to be some of the most popular flavors among non-alcoholic seltzers, so it's no surprise that they're desirable in the spiked-seltzer realm, too.

"Since our launch in 2016, we have only launched six flavors – it takes time to perfect a liquid worthy to bear the White Claw name," said Phil Rosse, White Claw's president. "In the last year, tens and thousands of eager and passionate consumers took to social media requesting new flavors - and we listened."

The delightfully fruity new flavor selection, which was originally announced back in November 2019, sounds notably summery, bringing to mind sunshine-y day with its selection of citrus fruit and juicy watermelon themes. Could this new drop be shaping us up for yet another Summer of White Claw? Honestly, I'm not complaining. Bring it on.

According to White Claw, the current top-selling flavors are Black Cherry, Mango and Ruby Grapefruit — and the new trio of is set to perform well, too. Let's just hope they produced enough of them to avoid a repeat of the near-apocalyptic White Claw shortage of 2019 (during which I was one of the many brand-loyal Americans who were desperately buzzing from grocery store to liquor store in search of the beverage, only to find it sold out everywhere for several weeks straight).

If White Claw's new flavors sound deliciously refreshing to you, get out and try them for yourself! And if you feel like you hear something in the distance, rest easy, as I can almost guarantee it's just the sound of a million White Claw pop-tops opening up in curious celebration.