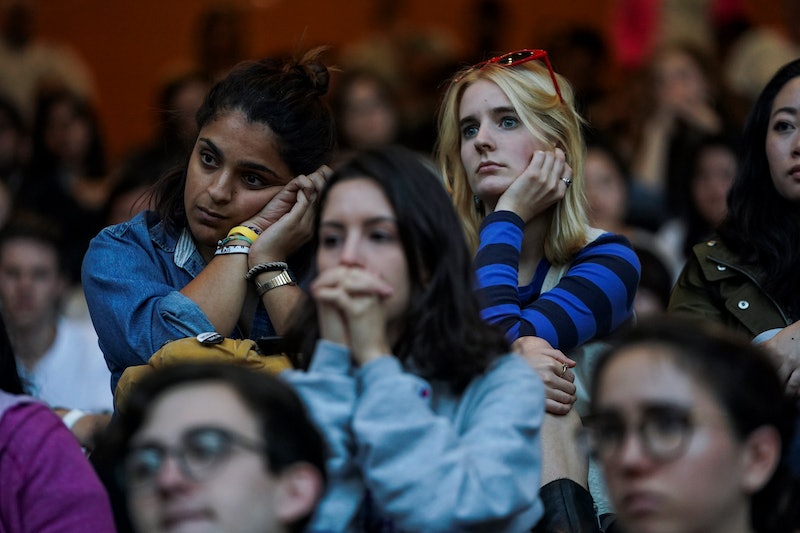 The latest mass shooting in America is almost perfectly playing out the familiar patterns that the nation has come to recognize in the wake of these tragedies. A white man killed dozens of people in Las Vegas on Monday night, just as a white men did at Newtown in 2012, Umpqua Community College in 2015, and the University of Texas 50 years ago. Yet there is little public discourse about how to address this longstanding problem, because in large part, people aren't ready to fully admit the problem exists. White men commit more mass shootings than any other demographic, but their white privilege prevents people from approaching the problem from a systemic perspective.

Privilege comes in many, many different forms, but in this case, part of the privilege that protects white men is sheer numbers. Whiteness is the majority in America, and white men are ubiquitous — both in society and in their control over societal structures — in a way that they are not pigeonholed like minorities are when involved in violence. Black and brown people are often dehumanized and quickly cast as criminals or terrorists; in many communities, they are underrepresented, if present at all. That forces people to rely on stereotypes to conceptualize people of color, who are still portrayed in the media in an overwhelmingly negative light.

But the narrative surrounding white men are simply different than that of other groups. Even after the anecdotal and statistical evidence connecting white men to violence, people are disinclined to readjust their thinking about white men, in part because it would be so triggering all the time. If Americans walked around being as terrified of white men as many are of Muslims, society wouldn't be able to function.

Arguably though, people, and particularly women, have every reason to walk around being terrified of white men. It's proof positive of white men's privilege that people still go about their lives under the constant threat of white men as a whole. White men commit the vast majority of rapes and murders, and according to some studies, they commit the most violent crimes in this country. Six in 10 sex offenders are white men, and white men kill more people in America every year than international terrorists. You can say all you want that it's "Not All (White) Men," but the statistics point to white men being the most dangerous of all other groups in the country.

There's also the fact that white people have designed this power structure through years of intentionally excluding minorities from positions of power. To this day, minorities are denied access to spaces like newsrooms and entertainment studios that frequently trade in negative stereotypes about people of color. Even liberal (mostly white) celebrities don't typically talk about these systemic factors, choosing to highlight policy reform or charitable response. Those are certainly important issues to focus on, but they still circumvent the pervasive causes of these shootings. This injustice allows white, often covertly racist perspectives to become dominant and largely unchallenged in the media, so that white shooting suspects are portrayed differently than black ones.

While this homogeneity is slowly changing thanks to a diversifying media landscape, America still confronts the stark realities of institutional racism, especially after shootings like this. A white male shooter often gets excused by mental illness, which could also further stigmatize the mentally ill in the process. Or, his friends and family are quoted about how shocked they are, what a great person he was, as though his demeanor had any ultimate relevancy to his actions.

People rarely hesitate to call brown people "terrorists" when they're involved in acts of violence, but are much more reserved in ascribing that label to white people. White shooters are sanitized, referred to as lone wolves who were troubled. To top it all off, there are the juxtaposed headlines describing the Las Vegas shooter and 12-year-old police shooting victim Tamir Rice, wherein the victim is painted as more culpable than the attacker. The space between those headlines is where white privilege lives.

All of this serves to protect white men and make national discussions about privilege more difficult than they already are. By ignoring the commonality of the attackers' race between mass shooting events, the country misses really important chances to talk about what is ultimately causing these tragedies. A collective, honest discourse about the potential causes of these societal issues could be so productive, but it's not possible until everyone accepts the reality of white privilege.

Americans must never forget how much of their country and society is still rooted in racism. For generations, people have tried to ignore the mistakes and evils that this country has committed in the past while they still affect the present. White privilege and its deadly consequences need to end, before more innocent Americans are lost because of another white man's pain.