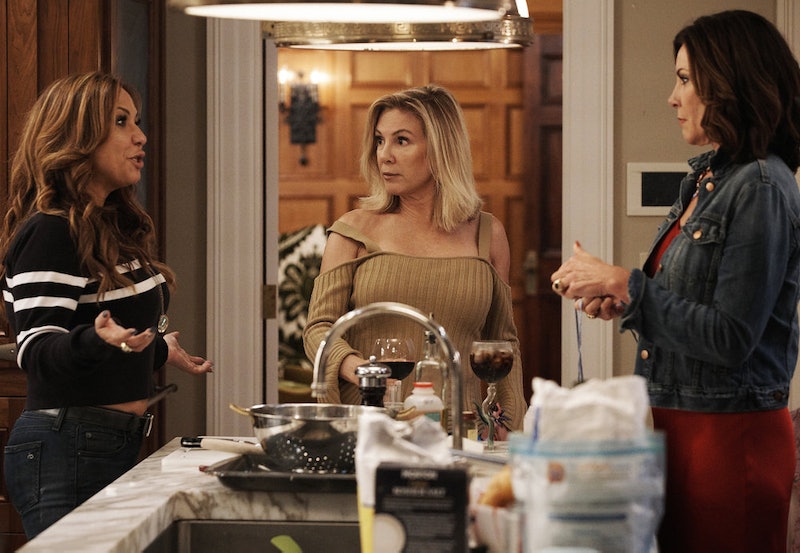 Ramona Singer has given over a decade of her life to Real Housewives of New York, and viewers have eagerly tuned in just as long. Over the years, Singer has proudly claimed the title of "work in progress" and "acquired taste:" in other words, Singer is unapologetically real. Part of this may have to do with the reality star's upbringing, which, by both her own account and that of Ramona's sister Sonya Mazur, was an abusive and traumatic experience. Born to Ukrainian American Bohdan and Hungarian Veronika Mazur, Singer and Mazur's childhood was largely defined by their father's alcoholism and reported abuse of their mother. Their stories paint a picture of a home in which fear was a constant, and children had to learn to fend for themselves from an early age.

Singer's 2015 memoir, Life On The Ramona Coaster, talks explicitly about the violent aspects of her childhood. She describes a series of years as "a blur of nightmarish memories, punctuated by my father drinking too much, then drunkenly abusing and berating my mother. An endless cycle of screaming, fighting, and crying." She adds: "I feel like I am living in a war zone” — and from her description, who can blame her? It sounds like her father's reported abuse is primarily focused on Singer's mother, but the reality star did intervene on occasion, when it became too much to bear.

Describing one such night, Singer writes the following: "I lunge toward him [...] I point the blade directly at his face and scream, 'Stop it. Stop it right now or I swear I will take this knife and shove it into your neck.'" Later in the book, Singer reflects on how growing up in that home affects her now. "It's easy for me to block out the cameras," she writes. "Probably because, growing up, I had to block out all the noise in my family. I shut the cameras out, just like I shut out my father's yelling."

Singer's sister Sonya Mazur also published a memoir in 2015, titled Cocaine & Champagne: Road To My Recovery. In the book, Mazur affirms Singer's account of their father's abuse, adding terrifying anecdotes of her own. "My dad was always yelling at [my mom] and calling her mean things. He was so arrogant and condescending to all of us," the memoir reads. Like Singer, Mazur has specific moments burned into her mind, like the time her father dragged her mother across the kitchen floor by her hair. "I didn’t know what to do — I was terrified [...] I thought my father might kick her, stomp on her head, or even kill her," she said.

Singer's father's alcoholism didn't only play out in bouts of violence: Bohdan Mazur also encouraged his children to drink from a young age. "He loved his booze so much I guess he wanted us kids to share in that love,” Mazur recounts in Cocaine & Champagne.

In 2009, Singer and Mazur's father died — and both daughters discovered they had been written out of his will. Mazur reflects on this in her book, suggesting that, “Ramona didn’t get anything because she had already amassed a small fortune through her work.” As for Mazur's part, she writes, "I'm fairly certain I was left out because of my lifestyle. He hated the fact that I was gay and never let me forget it.”

Ramona Singer has never been shy about speaking the truth, and it seems like that unwavering candor runs in the family. Given the extreme circumstances in which she grew up, it's even more impressive that Singer has built the empire she has today — and that she's managed to stay so confident in the face of constant criticism levied against reality TV stars. Singer has spoken about her parents on RHONY before, and likely will again, but those looking for a complete story should check out one or both of these memoirs. It's no small feat for these women to have grappled with their trauma in this way, and it's as devastating as it is powerful to see it laid out on the page.

More like this
RHOP’s Robyn Dixon Explained Why Juan Paid For Another Woman's Hotel Room
By Brad Witter
Erika Jayne's Estranged Husband Tom Girardi Has Been Indicted On Fraud Charges
By Jake Viswanath
'RHOSLC’s Heather & Whitney Are Still On A “Friendship Break” After Season 3 Reunion
By Jake Viswanath
Everything To Know About 'RHONY' Season 14
By Jake Viswanath, Alyssa Lapid and Brad Witter
Get Even More From Bustle — Sign Up For The Newsletter
From hair trends to relationship advice, our daily newsletter has everything you need to sound like a person who’s on TikTok, even if you aren’t.