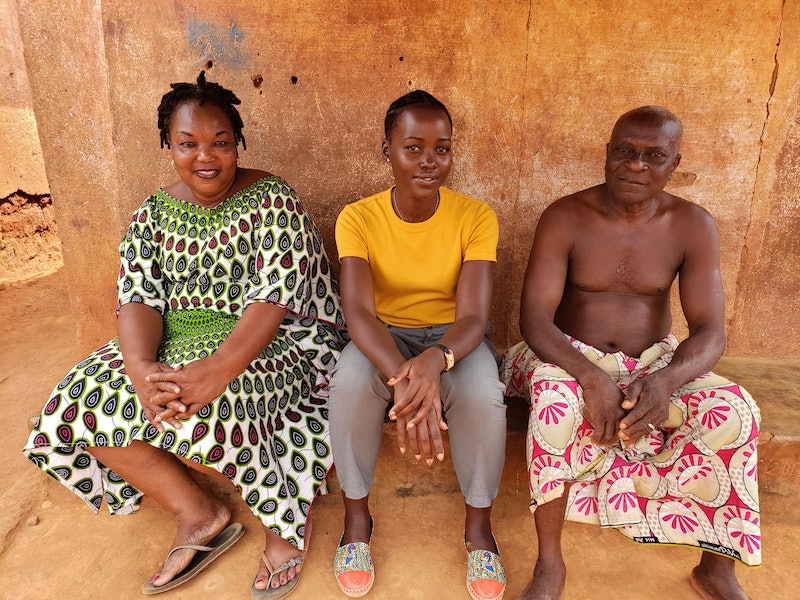 Oscar-winning actor Lupita Nyong'o, known for her versatility in superb and dynamic roles, is hitting Channel 4 with something special. Who could forget about one of her most iconic roles as Nakia in Marvel’s Black Panther in 2018? The film introduced the Dora Milaje, Wakanda’s bald, butt-kicking all women special forces unit. Although they might be fictional, the women who they were based on were very much real. So who are the warrior women from the Agoji Army that Nyong'o explores in her new documentary?

The documentary, which airs on October 23 at 10 p.m. on Channel 4, will see the star travelling to Benin in West Africa to uncover the story of the Agoji. According to a Channel 4 show synopsis, “These were warrior women, in armies up to 4,000 strong, who fought African and European powers alike.” The Kingdom of Dahomey, was an empire occurring between 1625 and 1894 in Benin. As the BBC reports, the Agoli warriors, also known as the Dahomey Amazons, or “mino”, which translates to “our mother” in Fon, were their soldiers. Considering women have only been able to serve in all roles of the British Army since 2018, the Agoji were lightyears ahead of their time.

Although it’s not known exactly when this army was first formed, according to local legend they were created during Queen Hangbe’s rule. Sadly, not much is known about her time on the throne, but she was said to only become queen shortly after her twin brothers death. But Queen Hangbe was said to be soon dethroned by her power hungry brother Agaja. Her ancestors are still alive today, and the Queen Hangbe legacy lives on as a ceremonial role. The current Queen Hangbe, a Benin woman named Rubinelle, told the BBC she believes all traces of her "ancestor’s reign were erased by Agaja."

During King Agaja's reign from 1718 to 1740 (although some sources suggest his reign started in 1708), the Agoji army was used to defeat other kingdoms. It’s thought that women were chosen as soldiers because men and women were treated more equally. However, as the Smithsonian magazine reports, some have also argued the spike in women soldiers could be because of men being shipped away from the region as part of the slave trade, with British Navy officer Arthur Eardley Wilmot noting women outnumbered men in Dahomey at the time.

The soldiers weren’t allowed to have children, but they were afforded certain privileges like a supply of alcohol and tobacco, as Smithsonian magazine reports. Their training was said to be vigorous, and they excelled in hand-to-hand combat. These women really didn’t mess around. During the 18th and 19th Centuries, The Agoji were said to have umbrellas that were decorated with the bones of their enemies, according to the BBC. And there are many accounts from Europeans seeing the women’s army and documenting their total skills. The BBC reports that in 1861 an Italian missionary called Francesco Borghero, described seeing The Agoji climb up thorny barricades made from acacia trees and completely ignore the pain from the plant's long spikes.

So, if you want to find out more about The Agoji, Nyong'o's investigations help you take an even deeper dive into their story and these hidden pre-colonial histories, because who doesn’t want to hear about a badass group of west-African women warriors?

More like this
A New Netflix Doc Will Explore The Unsolved Murder Of Jill Dando
By Sam Ramsden
Spencer Matthews’ Impressive Net Worth Expands Far Beyond Chelsea
By Sam Ramsden
Barney Walsh Has Been Linked With This Famous Miss World Winner
By Sophie McEvoy
Molly-Mae & Tommy Fury Revealed Their Baby Girl's "Really Unusual" Name
By Sophie McEvoy and Sam Ramsden
Get The Very Best Of Bustle/UK
Sign up for Bustle UK's twice-weekly newsletter, featuring the latest must-watch TV, moving personal stories, and expert advice on the hottest viral buys.