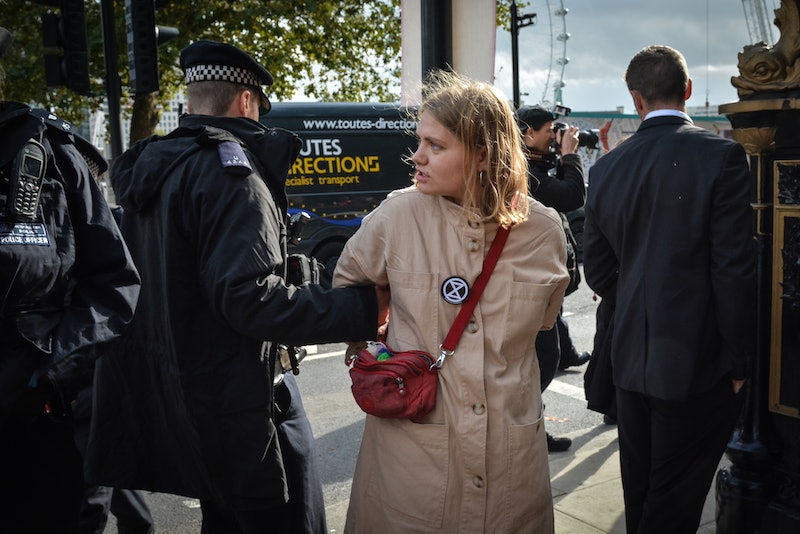 Last October, Extinction Rebellion took over Westminster in an attempt to convince the British government to do more about climate change. Thousands of activists occupied different areas of the city, with many willing to do whatever possible to spread their message, even if that resulted in being detained by police. But who are the Extinction Rebellion ‘arrestables’, and what drives them?

The 'arrestables,' as the name suggests, is a group of activists ready and willing to be locked up during an Extinction Rebellion (XR) protest. The ‘arrestables’ appear to be a major part of the rebellion's legal strategy. “Whilst our street actions are exciting and eye-catchy, XR also has a legal strategy for rebels who get arrested at our actions and go to court,” the group writes on the legal info portion of their site. “If the courts keep hearing the same message from us, that message will get through and more people will demand the urgent and radical action that is required.”

The term 'arrestable' has been thrown around a lot in the media, and many activists referring to themselves with this title, it appears to be a term XR is trying to distance itself from. As stated on the website, XR is looking to “dispel the myth that there is such a thing as arrestable and non-arrestable in [their] activist culture.” It continues:

“Being involved in a civil disobedience movement bears some degree of risk of arrest, be that low or high. Our collective role is to help create a culture of preparation and knowledge to allow us to make informed choices around our actions.”

"We had a few meetings before we went up to London, and people said whether they were ‘arrestables’, ‘maybe arrestables,’ or not. It was only when we were waiting to walk onto Waterloo Bridge, to block it, that I decided it was something important for me to do. So I prepared myself to be an arrestable, which involves writing a phone number on your arm and giving the well-being co-ordinator your mobile phone, so that there’s no incriminating evidence on you. Even then, I still wanted to wait and see what the vibe was before I committed myself 100% to being arrested."

More than 1,828 arrests were made during the autumn 2019 protests, the Guardian reports.

As Bustle's Niellah Arboine has previously reported, however, not all environmental activists can be as relaxed about the possibility of arrest. An increased presence of police during protests is “worrying for marginalised groups,” Arboine wrote in October 2019, especially those "who already suffer from institutional racism at the hands of police." This is linked to a wider, ongoing conversation about XR and diversity among its members.