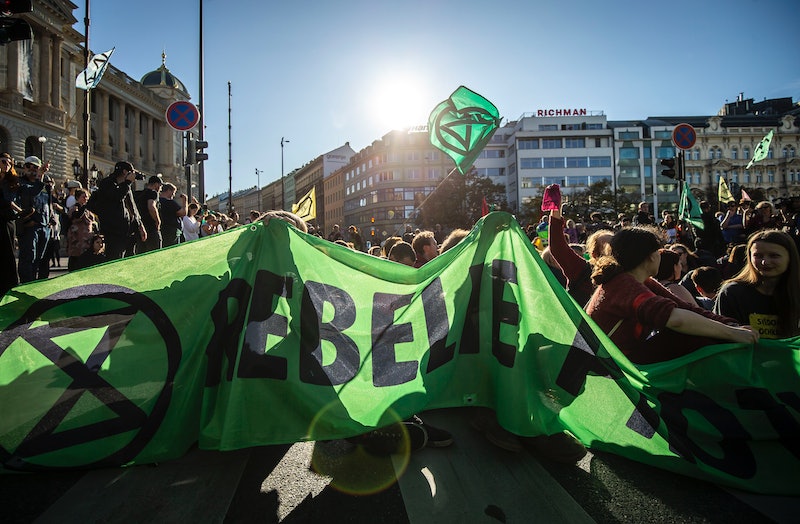 On Monday (Oct. 14), police started removing protesters in Trafalgar Square. A statement from the Metropolitan Police at the time read: “Any assembly linked to the Extinction Rebellion ‘Autumn Uprising’…must now cease their protest(s) within London.” The statement continued: “Protestors have been notified, and given an opportunity to leave the site. Anyone who fails to comply with the condition is liable for arrest and prosecution.”

The Met stated that, as of 8:45 a.m. on Oct. 15, there had been 1,457 arrests in connection with the ongoing Extinction Rebellion (XR) protests across London. Speaking about the ban, the Met's deputy assistant commissioner, Laurence Taylor, has said: "These conditions have been imposed due to the continued breaches of the section 14 condition previously implemented, and ongoing serious disruption to the community."

Section 14 Notice of the Public Order Act 1986 allows police officers to impose "conditions on public assemblies." In this case, the Met's imposed condition was ordering protesters to cease their protests within London by 9 p.m. on Oct. 15.

The protests have been criticised for causing disruption for everyday people in London and stretching the police force to its limits. For example, they recently blocked access to BBC headquarters to protest the BBC’s perceived silence on climate change, preventing staff from getting into work.

As a result of the XR activity, future protests could potentially be more dangerous or over-policed, which is particularly worrying for marginalised groups. According to the BBC, "The Home Office has confirmed that it is reviewing police powers around protests in response to Extinction Rebellion protests." For black communities and protest groups who already suffer from institutional racism at the hands of the police, the potential for policing to be stepped up at these demonstrations is especially worrying.

As a black woman who sees the urgent need for climate action and whose family could be directly affected by the climate crisis, I feel passionate about supporting the fight against ecological collapse. But this isn't the first time the behaviour and statements of individuals associated with XR have negatively impacted marginalised communities.

XR has faced much criticism since its beginning, including for the lack of diversity within the organisation, which, in turn, influence the kind of tactics they use. Tactics like XR protesters putting themselves in situations where they can be arrested, which isn't possible for everyone, especially black people and migrants. In addition to this, XR London recently said the police should "concentrate on issues such as knife crime" instead of nonviolent protesters, which, to me, feels racialised. Although their website suggests they are "working to improve diversity in our movement," more needs to be done to outwardly show this.

It's a problem most clearly evidenced by the likes of Rupert Read, a spokesperson for Extinction Rebellion. In 2014, Read wrote an essay for The Ecologist, which was subsequently denounced by fellow writer Adam Ramsay. In it, Read argued that mass immigration was contributing to climate change, making a number of controversial statements not only in relation to the environment, but to societal structures too. For example, Read suggested that mass immigration "reduces social cohesion" and "puts pressure on public services." On top of this, the article failed to acknowledge the considerable amount of evidence that suggests climate displacement will disproportionately affect black and brown people around the world, making it an unusual and alienating stance.

The article resurfaced recently after Read appeared on Question Time on Oct. 10, forcing The Ecologist to comment on the piece again, explaining that there are "ongoing discussions" happening about whether the article should remain online or not.

I reached out to Read to see if he had any further comment on the 2014 article, specifically the comments made about social cohesion and pressure on public services, as well as the lack of discussion about people of colour being disproportionately displaced as a result of climate change. The response I received was surprising, to say the least.

"May I respectfully ask if you have read the piece?" Read began, suggesting that the "key section," which referenced the "Third World," "war and oppression," and short-sighted "foreign aid," among other topics, already addressed the issues I raised with him.

In other words: this piece was precisely concerned with the reasons why people of colour tend to be more displaced than others, first and most prominently including climate breakdown. I want this country and the world to make this world a better place so that there are fewer climate migrants and fewer climate refugees. I want us to be welcoming to refugees; and I want us to really prioritise doing the above so that people don’t have to flee and seek refuge, in the first place. Kapish?

The link drawn here between people of colour and the Global South is worrying. As a reminder, the displacement experienced by people of colour in Louisiana as a result of Hurricane Katrina did not occur in the Global South, and the same goes for the current climate gentrification happening in Miami. Suggesting the displacement I asked about only applies to one part of the world exemplifies the kind of erasure XR's critics are concerned about.

Sadly, this is the type of exchange that makes me feel alienated from this movement, and stuck in two minds about it. Asking a spokesperson for XR to explain comments they've made (which have already been described as "dangerous" and "bizarrely neo-liberal" by The Ecologist’s content editor), and being met with no answers and "Kapish?" is disheartening. Especially as this is an organisation whose members just recently sent flowers to Brixton police station, without concern for the history of that station.

I know how important it is to get momentum behind environmental groups, but there are groups like Black Lives Matter, Wretched of the Earth, and young activist like Isra Hirsi for whom concerns like the ones I have are a real priority.

However, despite these issues with XR, the Met's banning of their protests is still a cause for concern. It could be seen as a move to suppress citizens' right to protest. While I don't agree with all of their tactics, XR is nonviolent, and there have been plenty of other London-based demonstrations in the past, such as the recent "free Tommy Robinson" protest, that were arguably far more dangerous, but did not face similar sanctions.

I, for one, am not happy that XR have been banned from London. In fact, I am worried about what this means for the future of protest. If climate concerns were addressed seriously and urgently, there would be no need for protests. Yet, when it comes to these kind of protests, we are still in the early stages of learning what is and is not an effective, inclusive, and meaningful approach. It is therefore important we continue to have these kind of conversations and that we use considered language when we do so.

More like this
Iran Has Issued A Death Sentence Over Mahsa Amini Protests
By Catharina Cheung, Darshita Goyal and Maxine Harrison
Joe Lycett Just Took HIs David Beckham Qatar Protest To A Whole New Level
By Sophie McEvoy
Footballer Jake Daniels Shared His Thoughts On A World Cup Boycott
By Sam Ramsden
What To Know About Martin Bashir After Watching 'The Crown'
By Bustle UK
Get The Very Best Of Bustle/UK