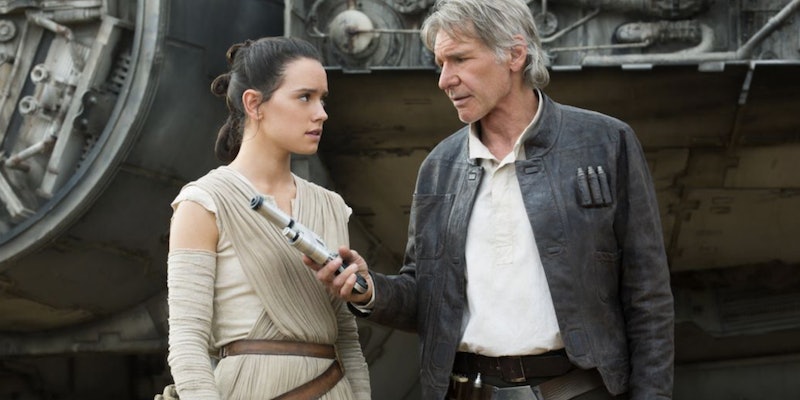 Every time I think that I've wrung every last ounce of meaning out of the very few Star Wars details that have trickled out, something happens that reveals there's still a little bit of juice left to squeeze out. And what I want to talk to you about today — who are the Jedi referred to in the title The Last Jedi? My predictions are Luke Skywalker and Rey, and before you try to correct my sentence construction, for using "are" instead of "is," or throwing out two names instead of one, let me direct you to the Spanish language version of the movie's title. As was revealed Friday, the Spanish title for the upcoming addition to the Star Wars franchise is Los Últimos Jedi. Los. Últimos. Jedi.

Innnnteresting. In English, the singular and plural form of the word is the same — Jedi — which made me assume that the title was referring to just one person, presumably Luke Skywalker. But that isn't the case in Spanish: The use of the plural words "los" and "últimos" proves that we're talking about multiple people. So, who exactly are the last Jedi? I'm sticking to my guess that Luke Skywalker is one of them, because he's historically been referred to as the last Jedi Knight, so that one feels like a freebie.

And as for the second, my gut is telling me it's Rey, because of all the groundwork laid in Star Wars: The Force Awakens. In Episode 7, it was made clear that Rey is sensitive to the Force, which could easily transition into manipulating it for her own use, à la a Jedi. Also, the fact that she was the one to discover Luke on his barren little island is suggestive that he'll take her under his wing and teach her what he knows. At least, that's what literally the entire arc of The Force Awakens suggested to me, so if that's not the case, I'm either a terrible movie-watcher, or Star Wars is out to trick me big time.

Either way, this news about the title's plurality has been confirmed in multiple languages now, from Portuguese to Italian to French and beyond, so stay tuned for even the tiniest details that leak out going forward — there's usually more to them than you might think.