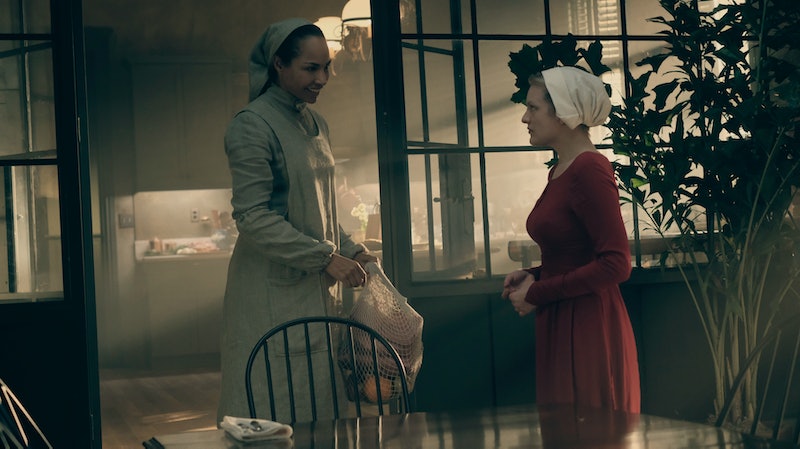 The Handmaid's Tale presents a dystopian near future with several sexist and classist new terms and roles to learn. What is a Martha in The Handmaid's Tale? Early on in the series, Serena Joy scoffs that Offred is "not a Martha," but this is not a name — it's a title.

In the first episode, the Martha that Offred lives with is not particularly nice to her — though the oppressive regime they both live under has done plenty of heavy lifting so as to ensure that women resent and do not trust one another. Her name is Rita. That's another difference between them and the handmaids. Marthas get to keep their names. And, they don't seem to want to help one another, or even talk to one another.

Just like the role of the handmaids is inspired by the biblical tale of Jacob, Rachel, and Leah, much to my own biased chagrin, the figure Martha in the Bible was a hostess consumed and happily obsessed with chores — but also heavily implied to be a homeowner. That's interesting to me. It suggests that housekeepers end up running the house in more ways than one, possibly due to their wealth of information. Marthas have a different kind of power and some different kinds of freedom in The Handmaid's Tale, which may end up coming into play later.

More like this
On 'The Handmaid’s Tale,' Christine Ko Fights Back
By Gretchen Smail
UK Viewers Will Have To Wait To Watch The Handmaid’s Tale S5
By Maxine Harrison
15 Offensive AF Jokes In 'Friends' That Really Aren't OK
By Tolly Wright, Bustle Editors and Meguire Hennes
Everything You Need To Remember Before ‘The Handmaid’s Tale’ Season 5
By Grace Wehniainen
Get Even More From Bustle — Sign Up For The Newsletter