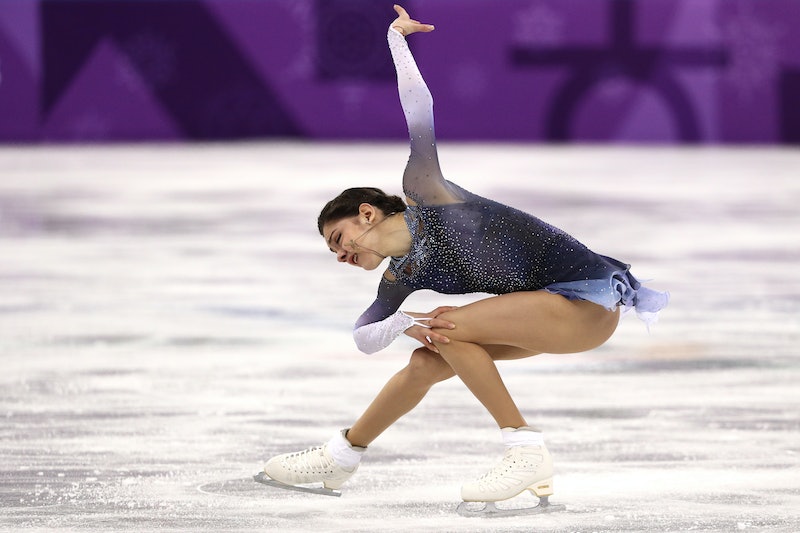 Despite Russia being banned from the 2018 Winter Olympics, dozens of individual athletes from the country have qualified to compete in the games. Only, they're forced to compete under the title of "Olympic athletes from Russia," aka OAR. Though you won't see the Russian flag on their uniforms, Some OAR competitors have already dominated the competition. Russia is especially known for leading on the ice rink, and this year is no different. There are a number of super successful OAR figure skaters competing in the Olympic Games.

While some felt bad that the Russian athletes wouldn't be allowed to compete under their own flag, their national pride was evident at the team figure skating competition on Sunday night. Russia fans proudly waved the country's flag and wore hats that read "Russia in My Heart" as they cheered on OAR ice dancers Ekaterina Bobrova and Dmitri Soloviev.

"We felt like at home," Soloviev told The New York Times. "We felt that every person sitting in each corner of the stadium was yelling the name of Russia."

Bobrova and Soloviev ended up taking home the silver medal, with help from teammate Alina Zagitova, who won first place in the women's free skate in her Olypmic debut. Zagitova even beat out U.S. figure skater Mirai Nagasu, despite her becoming the first America woman to land a triple axel at the Olympics.

Some other standout figure skating stars from Russia include Evgenia Medvedeva, who won the women's short program in Sunday's team competition, with 81.06 points. She added an additional 10 points to the team competition and ended up setting a world record. The 18-year-old was introduced to the sport by her mother, who was also a figure skater. Medvedeva broke her foot in 2017, but has since made a full recovery.

Evgenia Tarasova and Vladimir Morozov also won first place for Russia in the team event pair skating short program on Feb. 9 at the Winter Games. Tarasova, 23, and Morozov, 25, also took home the bronze in pairs at the 2017 World Championships.

The only OAR competitors that haven't placed yet include 20-year-old Kristina Astakhova, the 2015 Winter Universiade silver medalist; Astakhova's partner, 29-year-old Alexei Rogonov; and the pair of Tiffani Zagorski, 23, and Jonathan Guerreiro, 26. All four athletes were moved up from their alternative positions to compete in PyeongChang after skating stars Ksenia Stolbova and Ivan Bukin were banned by the IOC.

The OAR's impressive performance so far at the 2018 Winter Olympics isn't surprising, considering no country has ever won more Olympic skating medals than Russia and the former Soviet Union, according to the Times. And despite some setbacks due to the controversial IOC ban and several injured athletes, it looks like Russia is living up to its reputation.