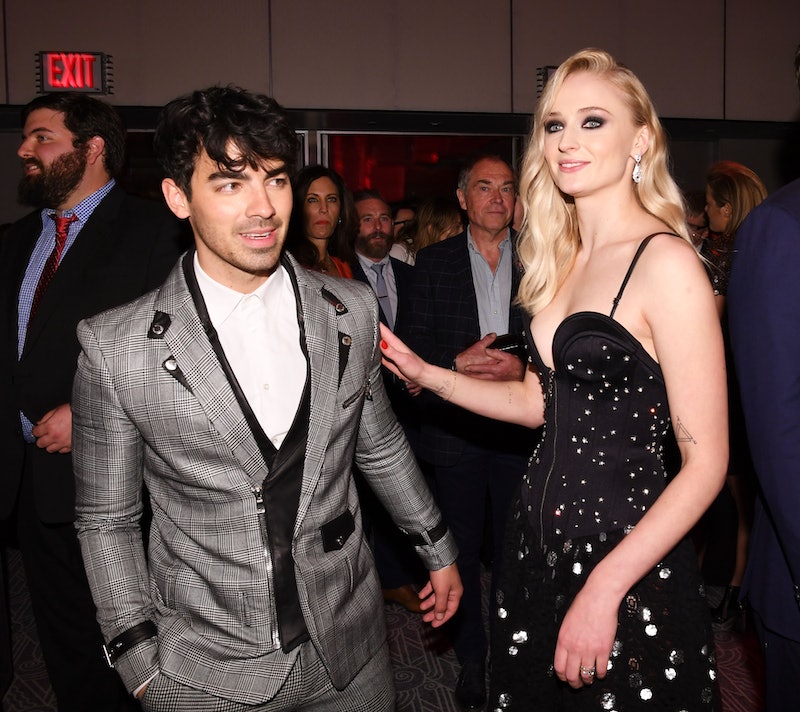 If you're familiar with Joe Jonas and Sophie Turner's hilarious and adorable antics on their Insta accounts, then it came as no surprise that the two decided to tie the knot last night in true Las Vegas style after the Billboard Music Awards. And while I'm sure you're still swooning over the Insta lives that were making the rounds, I can't be the only one meticulously analysing them to see who was at Joe Jonas and Sophie Turner's wedding.

As Entertainment Weekly reports, the news began to spread thanks to Diplo live streaming the event on his Insta story. After the DJ captured Turner in a white jumpsuit (with a veil, ofc) accompanied by Jonas and his bros entering a chapel with the caption "Gonna hit this wedding real quick," it was pretty obvious that the couple were officially tying the knot. Singer Khalid was also in attendance, and country singers Dan + Shay performed an acoustic version of their track 'Speechless' while Turner and Jones exchanged candy rings.

And while you'd think it would be pretty easy to spot which other famous faces were in attendance, it's actually pretty tricky as most of the guests have their backs towards the camera. However, since the wedding was immediately after the awards ceremony, it's not hard to imagine that a dozen or so of the attendees followed Jonas and Turner to the chapel.

What is certain is through Diplo's stream is that Nick and Kevin Jonas were by their brother's side and Turner's now sister-in-law Priyanka Chopra-Jonas "appeared to be the Maid of Honour", according to Elle. While it's unknown whether this was planned or a whirlwind sorta deal (I mean when in Vegas, amirite), I wouldn't be surprised that the couple had another wedding for those who may have missed out on this one.

During an appearance on The Late Late Show earlier this year, Jonas told host James Corden that he and Turner were going to get married this year (check), but also mentioned that they were planning a summer wedding. "I'm looking forward to it. It's going to be a lot of fun." He also mentioned that it'll be a blend of his and Turner's background and that they're going to combine English and American culture. "I thought for the first time I'd be marrying into a family where I'd become a soccer fan, like, a football fan, like, find my allegiance for a team," he said.

"So her whole family doesn't like football; they like rugby. So now I have to figure that out. We're going to have a flag rugby game at the wedding and a flag football game. So if the groomsmen show up with black eyes and broken arms, I'll be very proud."

Another wedding would also give Maisie Williams the opportunity to be Turner's maid of honour. While it's unclear whether or not she was at the Vegas wedding, Williams did confirm to Radio Times that she landed the gig in January, and Turner told Entertainment Tonight earlier this month that she will be "one of two" at the wedding.

Whatever happens, 2019 is totally shaping up to be this couple's year.