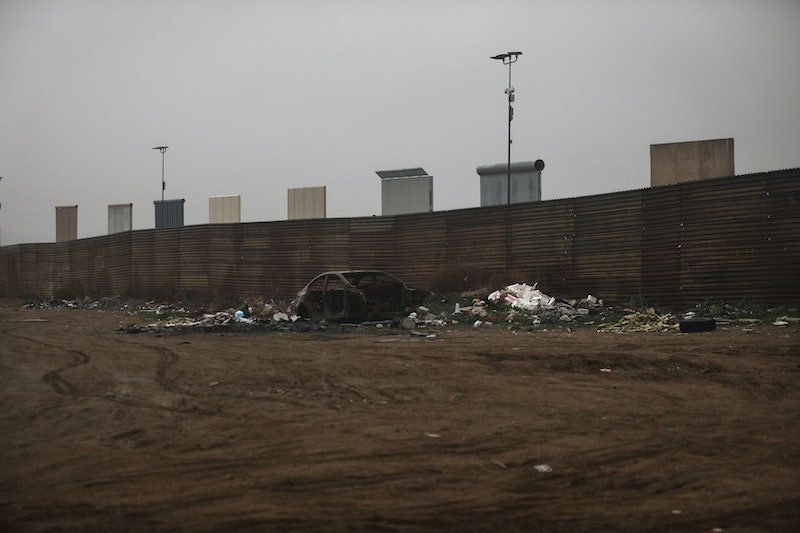 Over the past several weeks, POTUS has been publicly toying with the idea of declaring a national emergency in order to secure border wall funds. Since his presidential powers give him the right to declare one without the support of Congress, you might be wondering who can stop a national emergency, if any legislative body even can. The truth is that Congress does have the power to veto a national emergency declaration — but it wouldn't be easy.

According to NPR, the National Emergencies Act (which was first enacted in 1976 and then edited after parts of it were struck down by the Supreme Court in 1983) allows Congress to override and veto a national emergency, if each chamber approves the override with a majority vote, and if the president subsequently signs the joint resolution. If the president is unwilling to do that, then both chambers of Congress would need to vote in favor of the resolution by at least a two thirds majority. In that instance, the president's signature would not be needed and the national emergency could end via Congress alone.

There's another immediate question that many might ask around the idea of a national emergency: how does funding play into the declaration? After all, POTUS has explained on many occasions that he's only considering a national emergency declaration because Democratic leaders have refused to compromise and give him the $5 billion in border wall funding for the coming year, as seen in the video below.

To reporters on Jan. 9, via Vox, Trump explained that he was "looking at a national emergency because we have a national emergency." Then, when he was asked where the money would come from, he said that there were "a lot of different ways" to secure funding, though he didn't specify what he meant by that.

As Vox notes, though, there are a number of ways in which Trump could use a national emergency declaration to access funding for the wall: he could reallocate military spending, for example, or he could declare a more specific emergency, a "state of immigration emergency," in which he could get access to an emergency fund for immigration-related needs.

To be clear, though, not all scholars are in agreement on how constitutional any of Trump's actions are: many believe that he doesn't have the grounds to declare a national emergency, let alone to access funds for his border wall without Congress' approval.

In an op-ed for The New York Times, Bruce Ackerman, a Yale professor and author, argued that POTUS would be committing a federal crime by declaring a national emergency for wall funding. However, many other scholars spoke with NPR about how this effort would be entirely within his rights, constitutionally. Ultimately, it will be up to lawmakers in Congress to decide how they choose to respond to Trump, if he does declare a state of emergency.