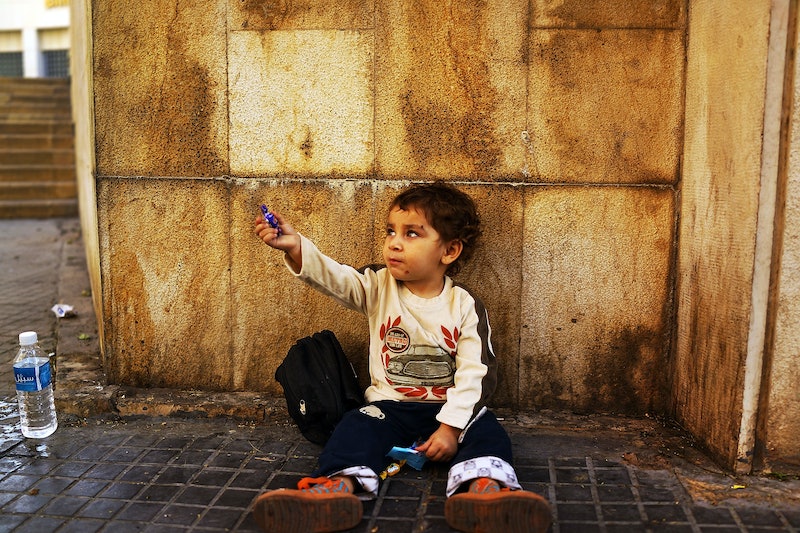 Khan Sheikhoun. It's the name of a small town in northern Syria where a deadly chemical attack on Tuesday killed dozens of civilians. Among the victims were several children, which made it both a tragic and not atypical day in the Syrian civil war. What set Tuesday apart was the use of a chemical weapon, all of which had supposedly been removed from Syria back in 2014. That effort came after a 2013 chemical weapon killed 1,400 men, women, and children — an attack that, like the one on Tuesday, is widely believed to have been carried out by Syrian President Bashar al-Assad's government forces.

Assad has denied that his military is responsible for the death toll in Khan Sheikhoun. The Syrian government has, in fact, claimed no role in any of the chemical attacks unleashed upon civilians over the six years of fighting. However, as Anne Barnard and Michael R. Gordon report for The New York Times, "only the Syrian military had the ability and the motive to carry out an aerial attack like the one that struck the rebel-held town of Khan Sheikhoun." Russia, who is backing Assad with both money and military equipment, said warplanes accidentally hit facilities that rebels were using to house chemicals for their own illegal weapons manufacture.

However, the official account from Russia is problematic, to say the least. Jeffrey Marcus lays out a point-by-point refutal of the Russian explanation for The New York Times, and it's impossible to escape the conclusion that their version of events is simply impossible. One of the strongest arguments against the Russian account is that a bombing of a chemical storage facility would most likely burn that substance up. Additionally, Marcus cites international weapons experts who explain that sarin would probably not be stored in "active form," a further rebuttal of the Russian version of events.

Most international leaders and observers are confident that Syrian military forces are responsible for the latest chemical attack in Khan Sheikhoun. U.N. Ambassador Nikki Haley ripped into the Assad on Wednesday, saying the recent attack was an "assurance that humanity means nothing to the Syrian government.” Haley also indicated the United States would be willing to take some kind of action if the U.N. refused to do so.

The U.S. position has been, informally, to condemn Assad but refrain from meaningful involvement in Syria's war. President Trump had signaled he intended to do the same, though there seems to be evidence that perhaps the official position on Syria is shifting.

More like this
How To Fight For Reproductive Rights, Based On How Much Time You Have
By Courtney Young
LGBT+ Men Fleeing Afghanistan Were Denied Asylum By The Home Office, New Findings Show
By Sam Ramsden
President Zelensky Spoke Out On Ukraine's Chances Of Hosting Eurovision Next Year
By Sam Ramsden
The Music Industry Continues To Fail Black Women
By Precious Adesina
Get Even More From Bustle — Sign Up For The Newsletter