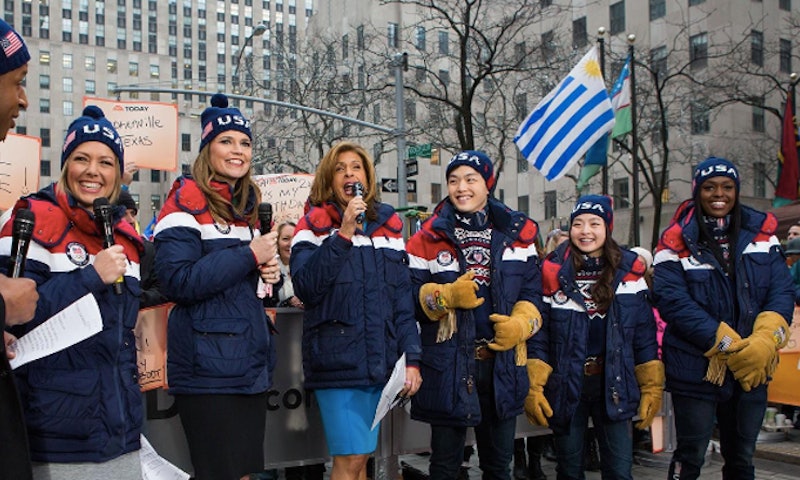 Athleisure might be having a moment, but the Olympic looks are taking the trend above and beyond. As the Today Show originally reported, Ralph Lauren designed the U.S. Olympic opening ceremony uniforms, and the items are just as innovative as they are trendy. The initial look includes knit sweaters, heated jackets, and little bit of fringe. Whether or not these athletes make it to the podium, they're already winning a gold medal in fashion.

The 2018 Winter Olympics are being held in PyeongChang, which means cold-weather accessories are a must for the event. Don't think that means they'll be skimping out on the fashion though. Ralph Lauren has been chosen, yet again, to design the opening ceremony outfits and the outfit is as trendy as ever.

According to Today, the outfits will include heated red, white, and blue jackets this year. Previous Bustle reporting states that the coats actually have a discreet heating element inside that will keep athletes warm throughout the entire ceremony.

"In a process developed exclusively for Ralph Lauren, the heating system is made from electronic printed conductive inks, printed in the shape of an American flag in carbon and silver ink and bonded to the interior of the jackets," the press release states. "The printed conductive inks are flexible and stretchable, and connect to a battery pack with three settings. With water-repellent properties and featuring 11 hours of heating time at full charge and immediate heat, the jackets are truly functional pieces for America’s brightest athletes."

On top of the innovative jacket, the team will be wearing knit sweaters and fringe gloves to keep them warm. There will also be official USA knit caps involved in the look. While the look is mainly red, white, and blue, the gloves bring a pop of color, albeit brown, into the look.

According to the press release, it was important for the designer to combine fashion and function into the look. The heated element goes way beyond any other opening ceremony outfit though.

“Ralph Lauren is excited by the convergence of fashion and function, and we are committed to supporting Team USA athletes by outfitting them with the latest innovative technology,” said David Lauren, chief innovation officer for Ralph Lauren, in a press release.

“We’re proud that we’ve worked so closely with the athletes, as well as the U.S. Olympic Committee, to keep evolving and improving. The uniform celebrates the American spirit, with iconic pieces updated with modern details and technical fabrications.”

This is far from the first outfit that Ralph Lauren has created for an Olympic ceremony. The designer has been coming up with red, white, and blue looks since the Beijing Olympics in 2008. That includes the Sochi and Vancouver Winer Olympics, as well as the London and Beijing Summer Olympics.

While you can't buy the heated jacket that the athletes will be wearing, you can stock up on the rest of the look. As of Jan. 29, there are two styles of sweaters, three hats, a pair of jeans, and mittens up for grabs. The styles range from $65 to $595, so you should probably start saving up now. The outfits might be gifted to the athletes, but they will cost you a pretty penny.

Just like past collection, these are limited edition items. They'll only be around as long as the 2018 Winter Olympics are, which is from Feb. 9 to the 25. After that, the looks will be gone for good.

There's a good chance that Ralph Lauren will be designing the Olympic looks until the end of time, because they get better every single year.

More like this
10 Times Haley Lu Richardson Dressed Just Like Portia
By Dominique Norman
The Official New York Fashion Week February 2023 Schedule Is Here
By Dominique Norman
Attention Millennials, Italian Charm Bracelets Are Officially Back
By Hannah Orenstein
Twitter Memed Doja Cat's Red Schiaparelli Look & I Am Cackling
By Dominique Norman and Kelsey Stiegman
Get Even More From Bustle — Sign Up For The Newsletter
From hair trends to relationship advice, our daily newsletter has everything you need to sound like a person who’s on TikTok, even if you aren’t.