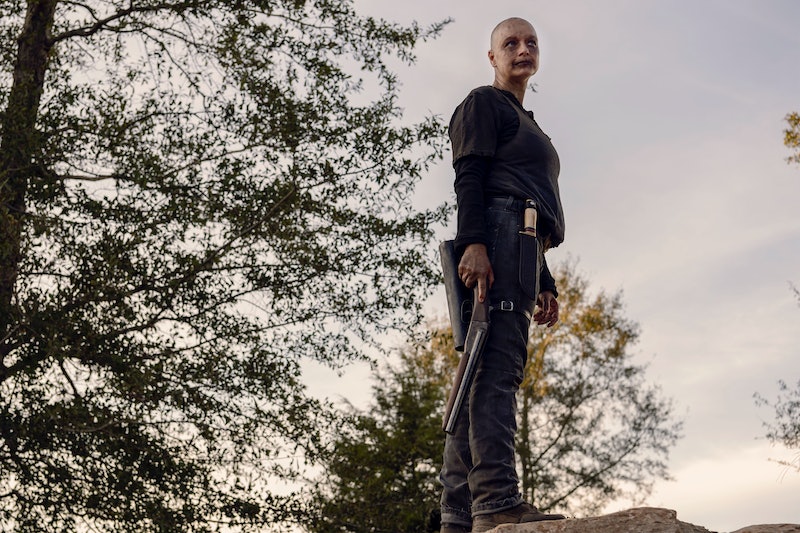 If you thought The Walking Dead was dark last week, Sunday's episode has surely shaken you to your very core. A war between the communities and the Whisperers is inevitable now, after the fair turned tragic and every group of survivors is mourning a loss. The Whisperers killed ten people at the fair on The Walking Dead, major characters and newer favorites included.

The timeline of this attack is kind of wonky, but it was at least easier to watch than that bottle episode of Negan bashing people's heads in one by one back in Season 7. It sort of seems like Alpha was in three places at once. Alpha killed Hilde and Miles, the nice couple whose marital bliss opens up the episode, and uses Hilde's hair to blend into the festival and threaten Lydia first. Then she and the other Whisperers kidnapped and killed the ten hostages. Then they encountered the scouts. By the time Daryl, Michonne, Carol, and Yumiko found Siddiq, everyone else was already dead.

At the end of the episode, a group of fighters who went to protect the Hilltop, Oceanside, and Alexandria during the Kingdom's fair find ten heads from various communities on pikes — a definitive act of war from the Whisperers.

The fact that some of the beheaded survivors are former Saviors, Highwaymen, and members of Rick's group really goes to show how much these communities have expanded over the six years. They were able to give homes to so many survivors, and really built something. Alpha may think it's unnatural, but she's the one making their lifestyle difficult to sustain.

The people that the Whisperers took seem random, for the most part, since they come from all over the place, though the first three heads are somewhat unrecognizable as new characters. But here are the major losses this week, may they rest in power.

This one hurts a lot. Tara was a good and fair leader at Alexandria. She was the best of Maggie and Rick Grimes. She salvaged the treaty and got the other leaders to sign it. What's going to become of them now?

When we first met Enid, she was a sullen teenager. Season 9 found her in a much better emotional place, with a new relationship and a new occupation. She was a freakin' post-apocalyptic doctor!

While it's not surprising that Alpha targeted her daughter's new boyfriend, it is deeply upsetting. Carol and Ezekiel have lost their son now, and he'll never get to grow into the Morgan disciple he was destined to be. Carol is so distraught, though it was nice to watch Daryl there to protect her.

So much for The Walking Dead: TNG — the new class of teens just lost two more important members.

She and Maggie may have had their differences, but Tammy Rose was an important voice in her community, and was starting over with her husband and the Whisperer baby.

You may not recognize Frankie without the LBD, but she was one of Negan's "wives," and joined Alexandria after the Saviors were defeated.

Siddiq thinks that Alpha let him live as warning and a symbol of fear that would drive the communities apart, back inside their walls. Instead, he tells the others how the kidnapped survivors fought back against the Whisperers, together, even though they came from different communities. They're a family, no matter what, and whatever horrors the Whisperers have planned can't change that.