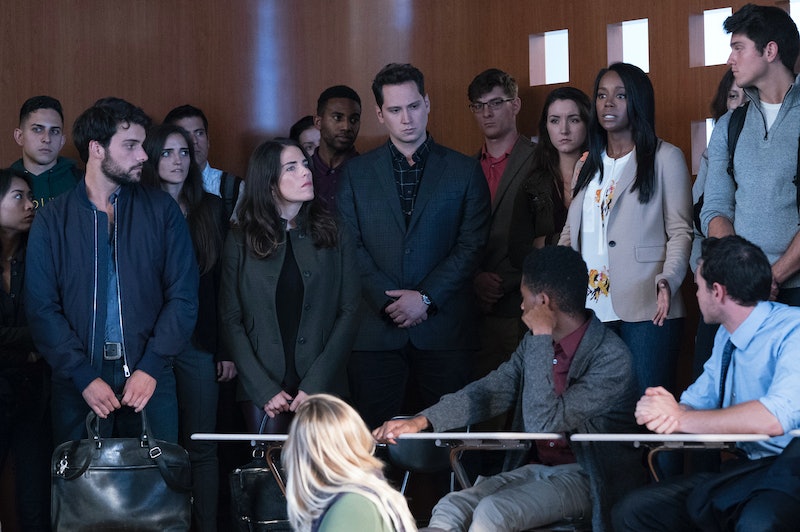 Season 4 of How To Get Away With Murder ended with things as happy as they get on this show — Laurel got her baby, Christopher, back; Connor and Oliver got engaged (again); Frank went back to law school; Annalise got her Supreme Court case validated; and no one died. That's a big deal in this world. Michaela and Asher broke up because she cheated on him, and sure, Simon got deported back to Pakistan and no one has forgiven Michaela for orchestrating it, but like I said — this is as good as it gets.

So naturally, Pete Nowalk and his team have to blow it all to bits by showing a struggling, bloody person crawling in the snow towards Connor and Oliver's tasteful winter wedding. Oh, and it's from the person's vantage point, so there are no clues. Let's take some guesses on who will be dead by the end of the season.

Frank is the one that walks into the wedding to tell Annalise that someone is dead, so it's not him. He is alive, and he is still the bearer of bad news. He also gets smacked across the face by Annalise because he can't spit out his information, which is kind of how I feel after five seasons of watching How To Get Away With Murder. Frank will live, if only to play zaddy to Christopher.

Not only does Annalise get Frank's message at the wedding, she is dancing up a storm seconds before. She is safe. Plus, Annalise Keating will literally never die. She will do this to spite everyone.

Bonnie is seen at the very end of the Season 5 premiere covering the struggling person's eyes and mouth, so Bonnie is not dead. If anything, Bonnie is a murderer, which, is very possible. She's had a hard life and she's done taking you-know-what from everyone.

Frank is still in love with Laurel (he proposes, for gosh sakes), so if he had to deliver the news of her death to Annalise, I assume he would be a little more broken up than weepy eyes. Also, killing off Laurel would mean Christopher has no mother, and that's a big hole for How To Get Away With Murder to fill. It takes a village, but who wants THIS village to raise their kid? Laurel is probably safe.

They are, at the moment, celebrating their reception, so how could it be either? However, we don't actually see either man at the party, so... you never know. Both are a could be.

Michaela is full and focused and back on her career game since she split with Asher and vowed to be celibate with Laurel. Michaela doesn't have much to do right now on How To Get Away With Murder, which leaves plenty of room for her to get tangled in something deeper. Maybe Antares comes back to haunt her?

Asher really has nothing to do right now — Annalise doesn't like his immigration case, and Michaela and he have split up. Asher seems like a dead end, and since he's so obnoxious, he could easily do something to encourage How To Get Away With Murder to end him. His death could also explain why Bonnie was so mournful when she was closing the dead person's eyes — they dated a little a few seasons back.

Round and round the How To Get Away With Murder Grim Reaper goes. Where it stops, it's hard to tell, but we'll get a little more in the way of hints every week. Let's just hope they come a little more quickly than usual.