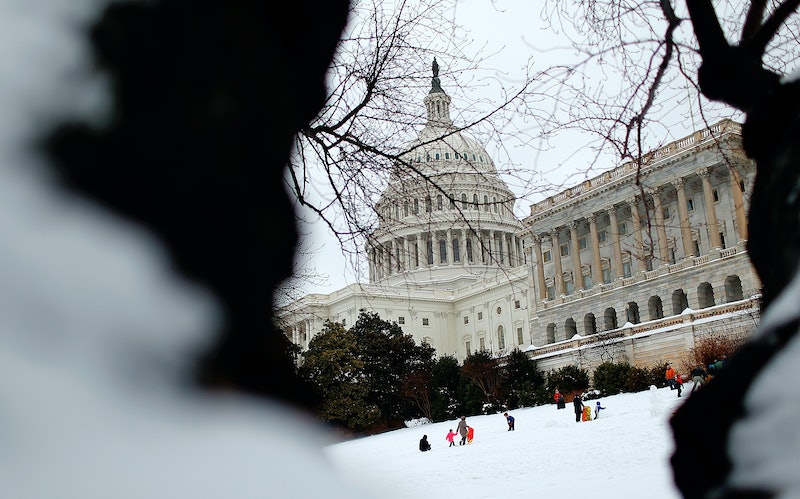 On Thursday, the White House confirmed that POTUS intends to sign the government spending bill, then declare a national emergency to secure border wall funding. Since the laws around it are so vague, you might be wondering who a national emergency affects, and whether your day-to-day life will be impacted by this declaration. The slightly complex answer to this question is that it's impossible to know who will be impacted until Trump clarifies his intentions with the emergency declaration.

According to the Brennan Center for Justice, a president must specify the powers he intends to use when he declares a national emergency. Specifically, he has to issue within his national emergency declaration a list of the powers he wants to use, and then he has to give public updates on the use of those powers, as well as provide updates to Congress every six months. So when Trump declares his national emergency, he will have to specify not only what the emergency is, but how he intends to combat it. When he does this, federal agencies and civilians alike will have a better idea of who is going to be affected by the emergency.

Previous national emergency declarations provide excellent context for how varied the declarations can be, in terms of who is affected.

In 2009, then-President Barack Obama declared a national emergency over the swine flu outbreak. Per The New York Times, he used his executive powers to allow hospitals and local governments to skip standard policies and expedite the setup of extended sites for treatment of those with the flu. The publication further notes that Obama's national emergency declaration allowed the secretary of Health and Human Services to issue waivers authorizing hospitals to execute disaster operation plans, if necessary.

So in that instance of a national emergency, the medical community, as well as patients, were directly affected by Obama's executive power use. In contrast, however, when George W. Bush declared a national emergency following 9/11, a totally different community was impacted. That national emergency, which has been extended for 17 years and is still in effect, specifically impacts individuals in the military.

Per USA Today, the emergency declaration enabled, in part, the president to "suspend the operation of any provision of law relating to the promotion, involuntary retirement, or separation of commissioned officers." It also allowed the sitting president to appoint an unlimited number of one- or two-star generals without going through formal procedures.

For Trump's national emergency, which is directly related to his desire to access funds for the border wall, it's not yet clear how he plans to access the resources to make that happen. With that said, it seems unlikely that his emergency would lead to any sort of mass impact on all civilians across the country, in the form of martial law, electronic communication interference, for example. This is because Trump will have to explain the powers he plans to use in detail, per the Brennan Center for Justice.

Trump will likely make the announcement within the next day.