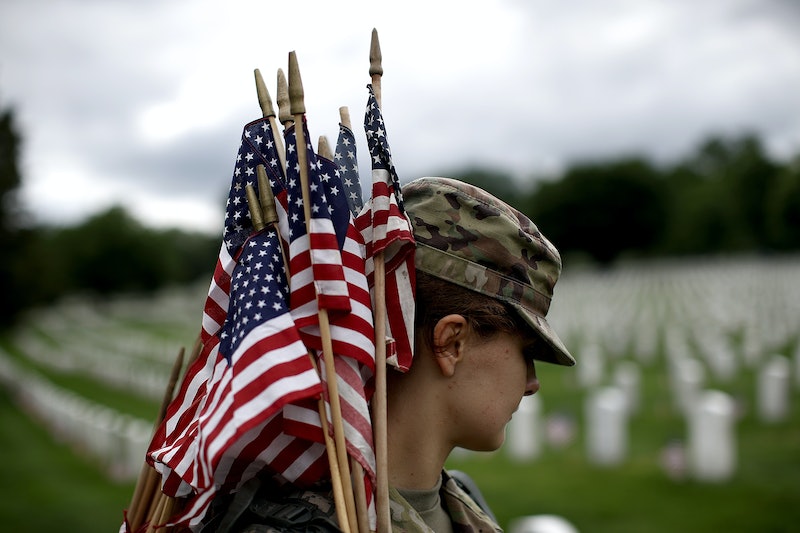 I’m not going to say that throwing an outdoor barbecue, wearing America’s proud colors, or watching your town’s cute little parade aren't superb ways to celebrate Memorial Day. Having a beautiful three-day weekend to look forward to (that even kicks off the summer months) is worth all of the hype... and the hamburgers. But who does Memorial day honor? And why do we parade around town for it?

Memorial is in the title for a reason, because Memorial Day is the day that we honor those who served in the U.S. military. Originally Memorial Day was known as Decoration Day — which originated back during the Civil War. It all started out as a tribute to those who once served through prayers and decoration, but soon evolved into a day where people douse themselves in red, white, & blue — eating hamburgers and marching down Main Street. The first ever Memorial Day celebration happened in Waterloo on May 5, 1866 where residents would decorate graves with flowers and flags.

Obviously, Memorial Day is no longer a simple affair such as that, but a day that is full of family barbecues, parades, and much more. So what happened to decorating graves and truly celebrating soldiers? If you were at all paying attention during the parade (besides looking for treats thrown out from cars and walkers passing by), you would notice that people who served in the military probably were marching in the parade — holding flags and dressed in official uniform. Yes, it is a great way to recognize those who once served, but sometimes the true nature of Memorial Day can get lost in the mix.

This year, if you are looking to make a change within your community on Memorial Day, than participate in the same practices that originally started Memorial Day in the first place. Mimic the work of Arlington National Cemetery and place a small American flag on each grave of a fallen soldier. Shake hands with those within your community who served, even ask them about people they once knew that fought valiantly for our country. Keep in mind that there is another holiday where Veterans are recognized (which you also should participate in), but to truly remember those who served is to hear the stories of loved ones where their memory continues to live on.

So like we usually say during Christmas or other holidays, don’t forget the “reason for the season.” Yes, eat those hamburgers and wear your new fab outfit from Old Navy’s iconic line of American flag apparel. But just don’t forget the reason for celebrating in the first place, and make sure to truly create a spirit of memorial within your communities, friend groups, and family circles.