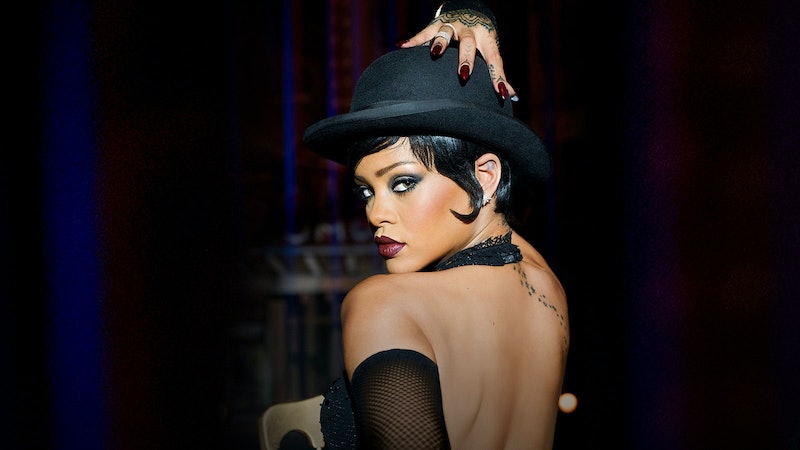 Rihanna has been slowly transitioning from international pop star to international movie star for years, and her role in the new science fiction movie Valerian and the City of a Thousand Planets is her boldest move towards movie-stardom yet. Everything surrounding the singer's role in the film has been kept pretty quiet; save for a quick dance move, she barely appears in the trailers. One thing we do know, though, is who Rihanna plays in Valerian: a glampod named Bubble. What is a glampod, you ask? Well, it appears that the creature is a shapeshifter alien, and, in Bubble's case, one that is a budding artist forced to work in an underground sex club.

Rihanna's character in Valerian isn't just there to sell sex, however. Bubble is actually a victim of sex slavery, sold to Jolly the Pimp (Ethan Hawke) and forced to perform in his club. As a performer in the sex club, Bubble meets Valerian (Dane DeHaan), the film's titular hero, and performs for him. Cue the burlesque number featuring sexy Rihanna dancing in even sexier outfits. But don't worry, Rihanna isn't just there to be eye candy. As director Luc Besson pointed out in an interview with Vulture, "Some people doubt that she can act, but in the film, she proved that she can act."

Besson was clearly smitten by Rihanna's acting abilities, and it seems those affections were returned in full by the singer. "He is especially very patient when it comes to working and directing me," she told Lain Networks, via Rap-Up. "I'm very new to the movie world and he's very considerate of that. He knows exactly how to get what he wants out of you and that's what a director is."

Unfortunately — spoiler alert — Rihanna is only recognizably on screen for a handful of minutes. A majority of her screen time is spent as an amorphous blue alien, which she shot via motion capture. (You can see her in full mo-cap spandex in this behind-the-scenes character featurette.) But even then, Rihanna is only in Valerian for a reported 20 minutes or so. It may not be much, but it's safe to say that the singer certainly makes the most of her limited time on-screen.