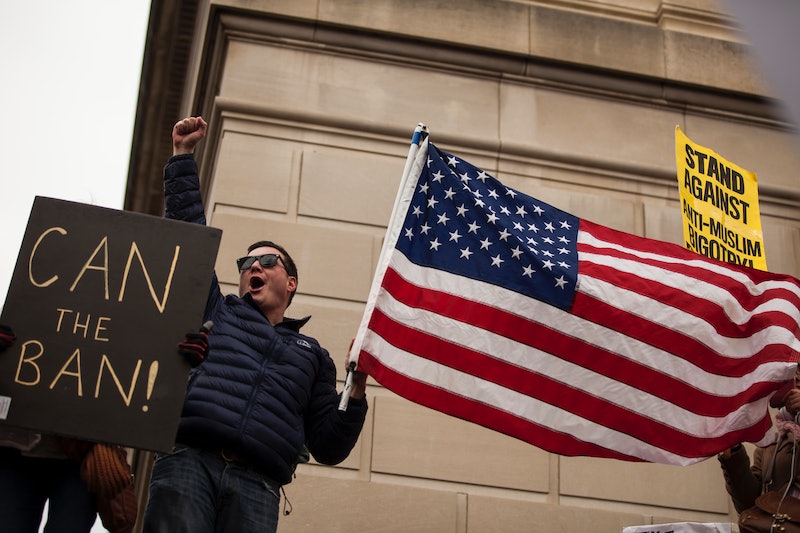 The Trump administration effectively won a victory Monday morning with the U.S. Supreme Court's decision that it will determine whether Trump's travel ban is legal. Before the court actually hears the case and issue a decision, their move raises a big question of who the travel ban affects right now. Parts of the travel ban will now go into effect immediately, as the Supreme Court has also granted the government's requested stay on the injunctions issued by the lower courts. Many citizens from the countries included — Iran, Libya, Somalia, Sudan, Syria and Yemen — will now be unable to enter the U.S.

Included in their statement, however, was the exception that the travel ban must not effect citizens from the previously-listed countries who already have a "bona fide relationship with a person or entity in the United States." For people who do not already have a relationship with a person or organization in the U.S., the travel ban will now bar their entry into the country.

As the justices explain in their statement on the travel ban, this "bona fide relationship" can take make forms. A person hoping to claim a bona fide relationship with someone they wish to come visit or live with in the U.S. must have a "close familial relationship" with that citizen or resident of the U.S. They refer to two cases that were brought up earlier, one by a man separated from his wife and one of a man separated from his mother-in-law. Both of those cases, the Supreme Court says, count as relationships that would allow the person entry into the U.S.

For a person claiming a relationship with an American entity, they say, the relationship must "be formal, documented, and formed in the ordinary course, rather than for the purpose of evading [the travel ban]." They give the example of students from those countries admitted to American universities; a worker with an employment offer from an American company; or a lecturer with an invitation to lecture at an American university as people who would be granted leave to enter the U.S.

What this means, though, is that the travel ban will still deny many people entry into the U.S. before the Supreme Court takes up the case this fall, and possibly after that as well, depending on what their decision is. And whatever it is, that decision will form an important precedent regarding the president's power when it comes to national security issues.

Three justices — Samuel Alito, Clarence Thomas, and Neil Gorsuch — said that they would have allowed the travel ban to go into effect in its entirety, but for now their opinion will remain as a dissent.

More like this
The 19 Best Tweets & Memes About Bisexual Awareness Week
By Lexi Inks
Romance Authors Are Mobilizing For Reproductive Rights
By Natalia Perez-Gonzalez
New Coins Unveiled As King Charles III's Reign Gets Underway
By Sam Ramsden
Who Is Nick Cannon Dating & How Many Kids Does He Have?
By Jordyn Tilchen and Radhika Menon
Get Even More From Bustle — Sign Up For The Newsletter