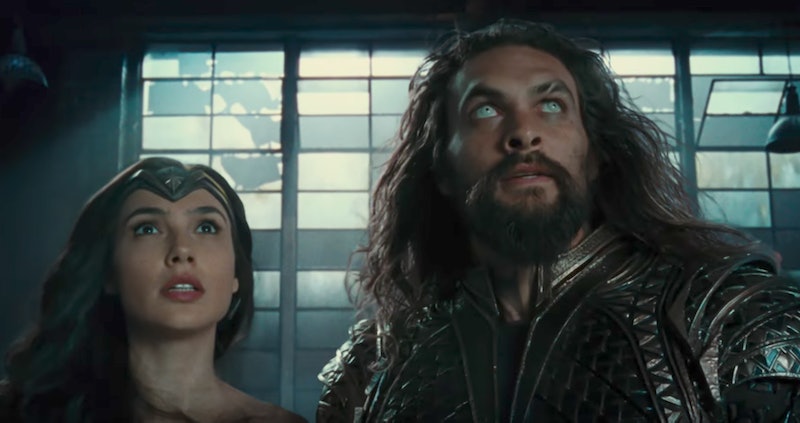 Spoilers ahead for Justice League. One of the benefits of being a fan of the DC Extended Universe is the fact that there's no shortage of characters to add to the mix, so you'll never be bored. The latest DCEU movie, Justice League, hits theaters everywhere on Nov. 17, and is a great example of how new characters can reinvigorate a series. In Justice League, heroes like The Flash (played by Ezra Miller), Aquaman (played by Jason Momoa), and Cyborg (played by Ray Fisher) take the spotlight — sure they were introduced in Batman v Superman, but the latest DC film helps viewers get to know them through their coalition, the Justice League. So who else is in Justice League? It's not just the crew from the latest film, as there are actually a lot more members from the DC comics.

For people who have seen Justice League already, the fact that other heroes make up the full crew is already known because at the end of the film, the members talk about how there's room for more heroes beyond just the six (Superman, Batman, Flash, Aquaman, Wonder Woman, and Cyborg). The original Justice League team from the comic books was similar to the cast of the new movie, but there are even newer faces to meet from it, still. According to Gamespot's Comic Vine, the original team consisted of Superman, Batman, Flash, Aquaman, Wonder Woman, Green Lantern, and the Martian Manhunter.

While you've heard of most of these superheroes, you probably don't know much about Martian Manhunter, for instance, but that could all change considering that Justice League may as well have ended with the lines, "Stay tuned for more members of our team in the next movie, Justice League 2."

Not only did the original seven members of the Justice League, introduced in the 1960 comic series aptly titled "Justice League of America," include two members that don't appear in the new movie, but plenty of other comic books portrayed the team of evil-fighting superheroes with even more characters that haven't yet made their DCEU debuts. A 1970s reboot of the Justice League added comic book heroes like Elongated Man, Red Tornado, Hawkgirl, Zatanna, and The Phantom Stranger as well, which means a few awesome new female characters could be hitting the screen in the next Justice League film to join Wonder Woman in the fight for justice. Zatanna, a magician woman, and Hawgirl, a weapon master based on an Egyptian princess, sound like they would be incredible characters to watch on the big screen alongside Diana Prince.

The final recruit of what's known as "Justice League America" was Firestorm, who joined the team in 1980. After that, however, a few different iterations of the Justice League were still formed. In 1987, a new crew of Justice League members made up the group called Justice League International, and that team included Batman, Black Canary, Blue Beetle, Captain Marvel, Doctor Fate, Doctor Light, Green Lantern, Martian Manhunter, and Mister Miracle. It's a little less female-friendly, but it still offers opportunity for a few new fun superheroes to join the DCEU in future sequels.

Plenty of other Justice League groups exist too, as DC comics continued to include various version of the crime-fighting conglomerate. These various JL teams include Justice League Beyond, Justice Legion Alpha, Justice League Elite, Batman's Justice League of America, and more. Hopefully the DCEU will take advantage of the many female JL members, including superheroes like Gypsy, Vixen, Maxima, and even Aquagirl, Aquaman's daughter, in future movies. There are so many exciting new DCEU characters to meet, and the latest Justice League movie only proves that the best is still coming for superhero fans.