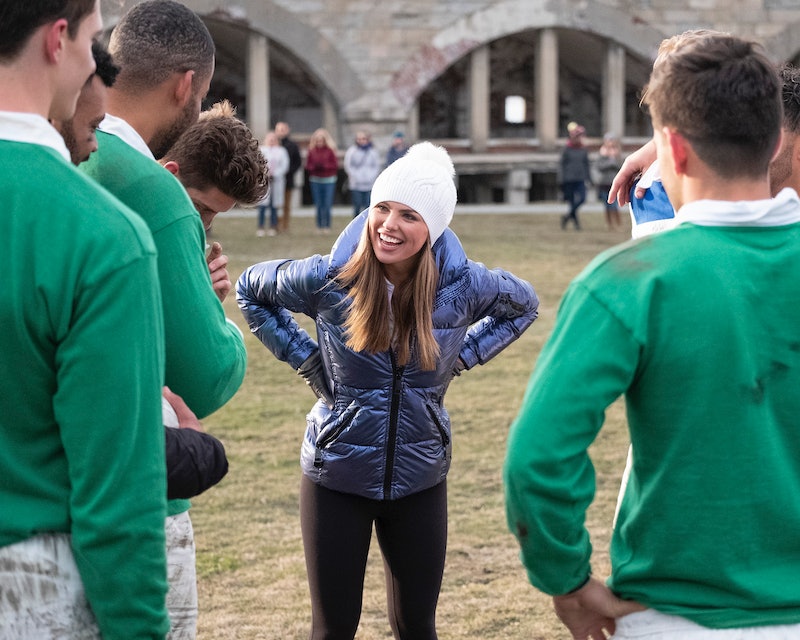 As a show that prides itself on its dramatic twists, The Bachelorette almost inevitably includes someone getting hurt each season. And judging from the extended promo for Hannah B.'s season, one of her suitors will be carted off in an ambulance at some point. So who gets injured on The Bachelorette? As usual, the footage provided deliberately doesn't reveal who exactly the hurt party is during this little snafu, but that shouldn't stop the rest of us from putting on our Sherlock caps and attempting to figure it out ourselves.

It's first important to note that these trailers are often misleading. So while some of the footage may seem to imply one thing, odds are it will turn out to be something completely different. These edits serve one major purpose: to help enhance the drama of the show, which, though all in good fun, makes piecing together the truth somewhat difficult. That being said, given what we know about the upcoming episode, there are a few clues that can help narrow down the list of possible victims.

Based on the official episode description for Week 4, there's a solid chance that the injury in question takes place during Monday night's group date. The synopsis states that "13 men get down and dirty, competing in a fierce but exciting rugby game at Fort Adam, home of the champion Newport Rugby Football Club, which sends one man to the hospital."

So what does that tell us? That this hospital trip is undoubtedly the same incident shown in the promo. Getting hurt during a game of rugby would more than warrant having an ambulance show up if the injury was severe enough. It also tells us that the wounded suitor will be one of those 13 men on the group date. This whittles it down to Luke S., Matteo, Grant, Garrett, Kevin, John Paul Jones, Devin, Connor S., Dustin, Peter, Dylan, Luke P., and Mike. Sure, that still leaves a lot of guys to consider, but it's better than nothing. Not to mention that there a few names on there that you can pretty much rule out.

Take Luke P., for example. He may be a focal point for a lot of the season's drama so far, but the odds of him being the one to get hurt feels very low. For starters, the guy is extremely muscular. If anything, he would be the one to cause the injury, rather than suffering from it himself. (Seriously, the guy is built like a brick house. It would take a lot for him to need medical attention.)

By the same token, though, it doesn't seem likely that the injured party will be someone who hasn't received adequate camera time thus far. After all, how can we be expected to be properly invested in this climatic moment if we don't already know/care about the person in question? So that rules out Dylan, Devin, and Matteo (because who the heck are they again?!?!). That means Kevin, Peter, John Paul Jones, and Connor S. are officially at risk.

Fans will just have to tune in on Monday night to find out the identity of this mystery man, but let's just hope that he's able to walk away with a clean bill of heath and a fresh red rose on his lapel.