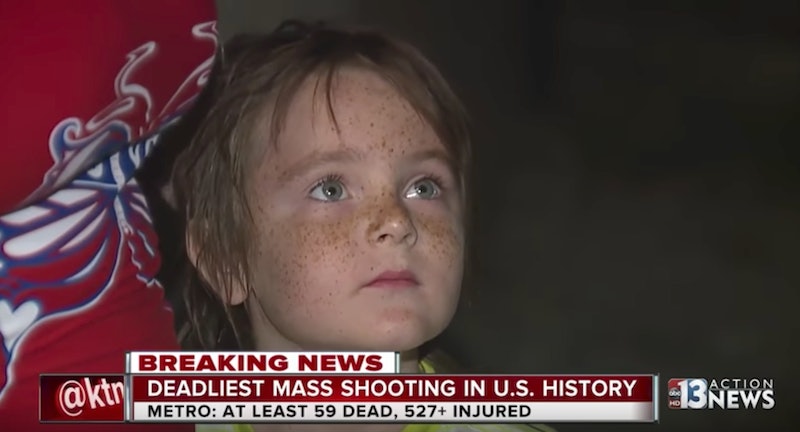 The stories from Sunday's mass shooting — the deadliest in modern American history — are almost exclusively harrowing and heartbreaking. With at least 59 dead and 527 injured in Las Vegas, the scale of senseless human suffering is difficult, if not impossible, to fathom. Yet even in the midst of chaos and violence, dozens of concertgoers and bystanders chose to help one another. And for one child, the kindness of a stranger and a boost from social media helped him reunite with his mom. After several hours, 5-year-old Aden Huser found his family after being separated from them during the gunfire.

Huser was at the Jason Aldean concert with his mom, sister, and aunt when a gunman opened fire on the crowd. Huser's mom, Doris Huser, and his 8-year-old sister had gone to the bathroom, and were on their way back to the 5-year-old boy when the crowd heard gunshots and started running for cover.

Huser fell, and was lost from his aunt in the process. He found his way into a merchandise tent, which is where 26-year-old Lindsey Rogers found him. Shots were still being fired, and the tent was by no means a safe haven from the gunfire.

After brief hesitation, Rogers reportedly decided to take Huser with her as she ran further from the attack. Rogers told ABC:

"I was nervous to take him because I knew that his mom would be devastated to find that her child was gone, but in the moment we thought that the best decision was to get as many people as safe as possible. The shots were so sporadic and it wasn’t stopping so we took a chance."

So Rogers picked up Huser and ran with him to a Motel 6, the closest building offering safety. After trying to call the police without much success, Rogers reportedly took Huser to a nearby hospital. Then everyone got to work using social media posts with the boy's picture to get the word out about his location and his safety. Chris Cunningham, a local off-duty police office at the Las Vegas Metro Police, posted Huser's picture, as did his girlfriend Taylor Sutton.

Through it all, Huser stayed calm and composed, telling Sutton his mother's name and, according to her, helping Sutton herself to stay grounded. "He honestly kept me calm. I didn't want to freak him out so we told him they were fireworks and asked him, 'Who were you with before the fireworks happened?' He didn't seem scared or worried," Sutton told ABC.

The social media sharing happened quickly, with Huser's information getting reposted thousands of times. A phone number popped up in someone's inbox, contact information for Huser's grandfather. Sutton called the number and arranged for Huser's pickup. After waiting in a back room at the hospital, Huser's grandpa showed up for the lost little boy.

"The second time I called and talked to my dad, he answered the phone crying. He said, 'They found Aden, I don't know how he is or anything. I just got a phone call saying your grandson is at Sunrise Hospital,'" Huser told ABC.

For Doris and Aden Huser, Sunday's night of tragedy ended in being miraculously reunited. The kindness and willingness of strangers to help a lost little boy is an inspirational reminder that even in the darkest and most frightful situations, there are opportunities to help the more vulnerable and less fortunate. After so much reason for heartache, their story is one delicate reason for hope.