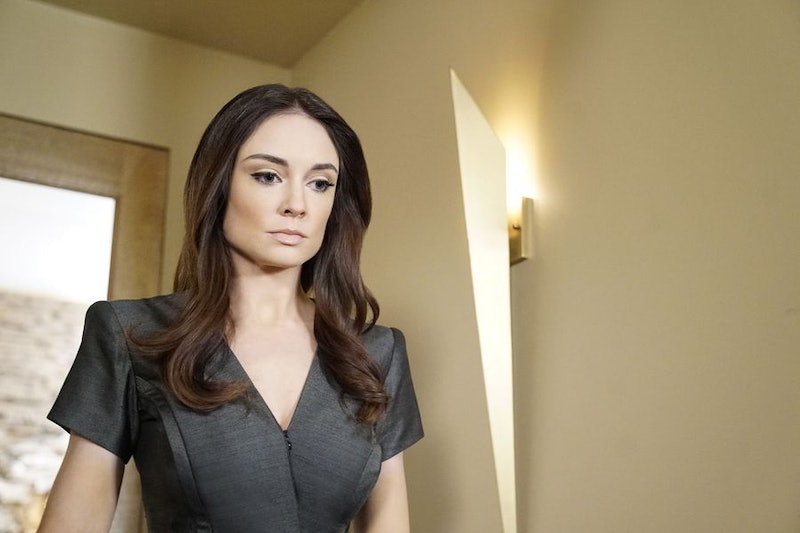 Season 4 of ABC's comic book series has raised many questions about demon-possessed superheroes, ominous Darkholds, and life-model decoys… But this Tuesday's episode, "BOOM," will introduce yet another mystery: Who is Agnes on Agents Of S.H.I.E.L.D.? The impending debut of yet another intriguing new character was revealed in the network's press release for "BOOM," which teases that "Daisy, Mace, and the S.H.I.E.L.D. team must find a way to contain an explosive Inhuman. Meanwhile, Coulson and Mack come face-to-face with Radcliffe's inspiration for Aida." And the cast list for the upcoming episode includes "Mallory Jansen as Aida 2.0/Agnes."

So who is the woman behind the machine? Alas, there is no character named Agnes in any of the Marvel comics series, so it doesn't appear that this particular storyline is being pulled from the show's source material. But that's not all that surprising; while Aida herself is inspired by a Marvel comics character, her onscreen version has departed drastically from her origins. On the page, A.I.D.A. (for Artificial Intelligence Data Analyser) isn't a Life-Model Decoy, but simply a sentient computer system given a female personality and voice by its creator, Tom Thumb, who was a member of the superhero group Squadron Supreme.

Since that version of A.I.D.A. never had a physical manifestation, there was no human inspiration behind it like there apparently was for S.H.I.E.L.D.'s Aida. And without source material to reference, there's no way of knowing what the writers have planned for this new character. But that won't stop us from making a couple of educated guesses, right?

In the comics, the closest friend and ally of both Tom Thumb and A.I.D.A. was Xina (code name: Ape X), a former member of the Institute of Evil who underwent behavior modification and was from then on a loyal member of the Squadron Supreme. When Tom Thumb learned he was dying of cancer and made A.I.D.A. promise not to tell anyone, the machine broke through its command and told Xina. After he died, A.I.D.A. and Xina worked together to try to make a robot replica of their departed friend, but their efforts proved fruitless.

While it's unlikely that the inspiration behind Aida will turn out to be some sort of super-powered ape-woman, it's possible that the show will take inspiration from this storyline, and have Agnes be an associate of Radcliffe's who once worked for the power of evil but has since reformed. In fact, maybe she'll be the only one who can stop his villainous machinations and modify his behavior the same way Tom Thumb modified Xina's in the comics.

There are a couple of other options, as well. Although there are no characters named Agnes in the Marvel comics, the name has already come up a few times within the Marvel Cinematic Universe — once on Agent Carter, once on Daredevil, and once on S.H.I.E.L.D. itself. On Season 2 of Agent Carter, Agnes Cully is the birth name of movie star Whitney Frost, who turned into the show's Big Bad after coming in contact with the unstable element Zero Matter. In the finale of that show, Whitney Frost was separated from the Zero Matter and ended up in an insane asylum. While it's unlikely that S.H.I.E.L.D.'s Agnes is the same character (since 70 years have elapsed since then), perhaps there will still be a connection of some sort. Could Aida's inspiration be Whitney Frost's daughter: Agnes, Jr.?

Daredevil and S.H.I.E.L.D. previously referenced the name Agnes in the same way: both Daisy Johnson (aka Quake) and Matt Murdock (aka Daredevil) grew up in the same home: St. Agnes' Orphanage. Of all the possibilities, it's probably the last likely that this "Agnes" will have any connection to Aida — but it's worth pointing out, since it refers back to S.H.I.E.L.D.'s own past.

One way or another, we'll find out the truth behind Agnes when "BOOM" airs this Tuesday night.