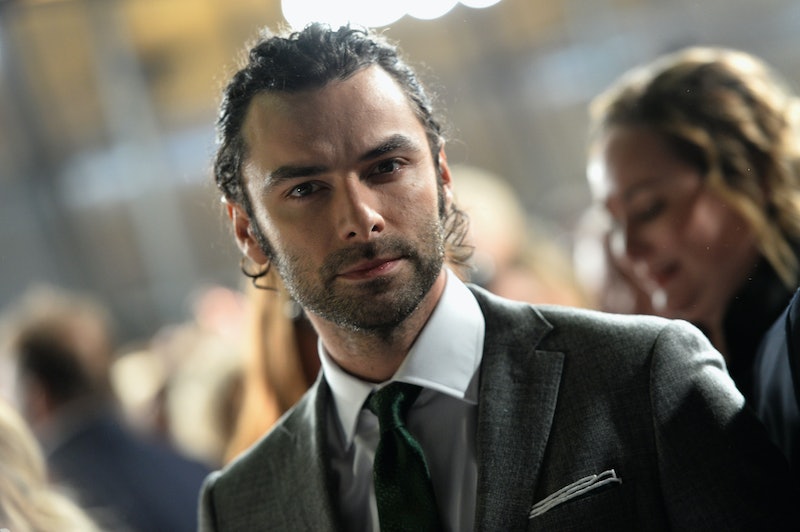 The fifth and final series of the BBC period drama Poldark has welcomed audiences back into the adventures of Captain Ross Vennor Poldark, who is portrayed by actor Aidan Turner. In addition to the hit BBC series, Turner is known for his previous roles in the comedy-drama Being Human, as well as The Tudors and the BBC adaptation of And Then There Were None. But what else is there to know about the Poldark star? What's he like off screen, and who is Aidan Turner dating in 2019?

One of the first instances of Turner's romantic life coming into the spotlight occurred back in September 2016 when The Sun published a picture of the actor kissing a "mystery brunette," who was later revealed to be marketing executive Tara Derakshan. In an interview with the Daily Mail, film director and friend of Turner David Caffrey said: "I walked in on Aidan dancing around his hotel room in his pants, saying, 'I’m in love, I love [Tara]!" Turner was also linked to London-based artist Nettie Wakefield in 2016, but the pair reportedly separated in June 2017, according to the Telegraph.

However, despite receiving this kind of attention, Turner actually prefers to keep his personal life out of the public eye, as The Express recently reported. In an exclusive interview with The Times in June 2018, Turner dismissed reports that he was engaged to a graduate lawyer from Gloucester. "I don’t think I even know anyone from Gloucestershire ... There’s absolutely zero truth in it," he told the newspaper.

However, in that same interview, the Poldark star revealed: "I do have a girlfriend, yeah." He wouldn't say much else, but he did tell the newspaper:

"There have been moments when you’re in the very early days of a relationship and a photographer comes out of nowhere. You’re walking in the park or you’re having a moment that’s quite private. I never want to be that person with sunglasses down, looking around before they leave the building. I’ve felt pretty bad in the past when photos have been printed. I can deal with it, but it’s not fair on the other person. It’s about responsibility."

In Feb. 2019, the Daily Mail reported that Turner had made a "rare red carpet appearance with girlfriend Caitlin Fitzgerald," who he reportedly met back in 2017 on the Massachusetts set of their film The Man Who Killed Hitler & Then the Bigfoot, according to the newspaper. The same article revealed that the pair's first red carpet appearance together was at a London film premiere in August 2018.

As mentioned previously, Turner is currently appearing in the fifth and final series of the BBC's hit period drama, Poldark. According to the BBC, the last ever season is already going down well with TV critics. And it appears that audiences at home are equally as impressed, because nearly five million viewers tuned in to witness the return of our favourite captain, the BBC reports.

Poldark series five airs every Sunday at 9 p.m. on BBC One.

More like this
Owen Warner Knows Exactly What Type Of Relationship He Wants
By El Hunt
We’ve Got A Text! Another 'Love Island' Series Is On The Way
By Darshita Goyal
Jill Scott & Her Fiancée Share A Passion For All Things Coffee
By Sam Ramsden
England's Ben White Proposed To His Girlfriend In The Sweetest Way
By Sam Ramsden
Get The Very Best Of Bustle/UK