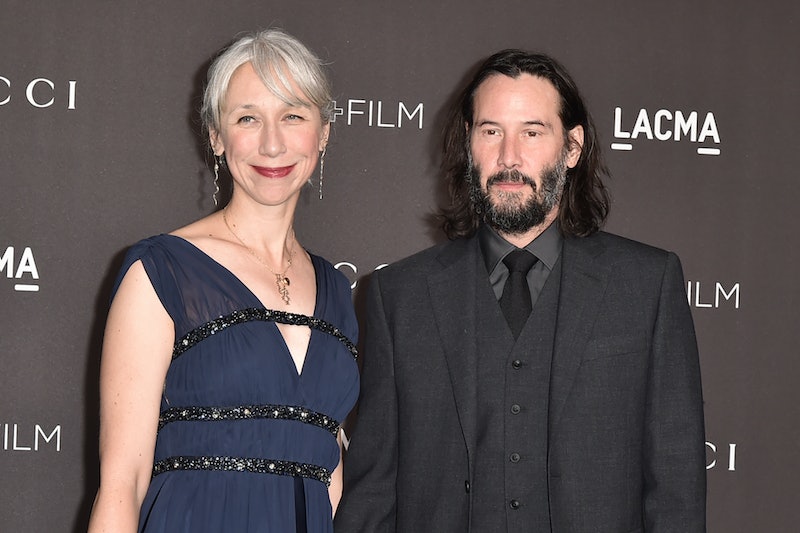 Another Internet Boyfriend is officially off the market. As People reported, on Saturday, Keanu Reeves and his rumored girlfriend Alexandra Grant made what seems to be their first public outing as a couple. And although he has yet to confirm the relationship himself — Bustle has reached out to Reeves' rep, but has yet to hear back — the fact that they were holding hands on the red carpet at the LACMA Art + Film Gala seems to say it all.

So far, not much is known about Reeves and Grant's reported relationship, but it seems the two go way back. As noted by People, Grant and Reeves have been friends and collaborators for a long time. The two worked together on his books Ode To Happiness (2011) and Shadows (2015), which Reeves wrote and Grant, who is a professional artist, illustrated.

But the books aren't their only joint projects. In 2017, Grant and Reeves founded a publishing house called X Artists' Books together, aiming to publish "thoughtful, high-quality, artist-centered books that fit within and between genres." Since it was established two years ago, it seems their publishing house has put out seven books, including The Artist's Prison, which was written by Grant herself.

Outside of her reported relationship and professional collaboration with Reeves, Grant has an impressive career in her own right. Not only does she share her art on Instagram, but she also showcases her work on her website, where Grant describes herself as "a Los Angeles-based artist who through an exploration of the use of text and language in various media—painting, drawing, sculpture, film, and photography—probes ideas of translation, identity, dis/location, and social responsibility."

In 2008, Grant founded grantLOVE, a project she uses to raise money to benefit artists and the arts in general. She sells stickers, clothing, jewelry, prints, and other items to help charities around the Los Angeles area. And in 2015, she directed the documentary Taking Lena Home about her own journey to return a stolen grave stone to rural Nebraska.

The LACMA gala isn't the first time Keanu and Grant have been spotted out and about lately. People also reported that they were spotted out having dinner at Santa Monica Italian restaurant Giorgio Baldi in October, where they arrived together and spent three hours enjoying their meal.

After news broke about their red carpet appearance, fans on Twitter immediately praised Grant and Reeves as a couple — some because they felt that a male celebrity was finally dating someone who is appropriate for their age, and others because they were simply happy for Reeves.

Since Reeves has always been pretty private when it comes to his personal life, fans may never have all the intimate details about his relationship with Grant. But right now, it seems they're all just happy to see the man formerly known as "sad Keanu" have a little romance in his life.

More like this
Who Is Allison Williams Dating After Her Divorce? She’s Engaged With A Child
By Jake Viswanath
'RHOP' Stars Robyn & Juan Reportedly Got Remarried & Filmed The Ceremony
By Brad Witter
Selena Gomez Confirms She's Single Amid Drew Taggart Dating Rumors
By Martha Sorren, Jake Viswanath and Jack Irvin
Who Is Murray Bartlett Dating? 'The Last Of Us' Star Is Extremely Private
By Alyssa Lapid
Get Even More From Bustle — Sign Up For The Newsletter
From hair trends to relationship advice, our daily newsletter has everything you need to sound like a person who’s on TikTok, even if you aren’t.