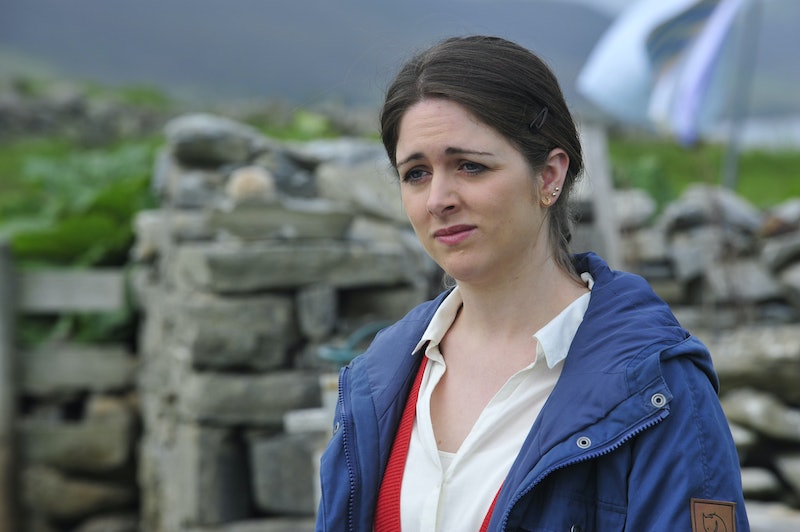 Alison O'Donnell aka DS Alison 'Tosh' McIntosh is a regular on BBC One's Shetland from day one. Now that the murder mystery set on one of Scotland's craggy isles is about to return to TV for its fifth season, it's time for you to get reacquainted with the actress. While she might be best known for her role as McIntosh, O'Donnell's appeared in much more besides your favourite Scottish detective show. So, when she's not playing DI Jimmy Perez's sidekick, what else is the actress up to? In other words, I want to know, who is Alison O'Donnell?

According to her Twitter bio, when she's not filming for Shetland, O'Donnell's a "mum" and a "cereal enthusiast." Cereal? ...Or cereal killers? The actress also has some very astute observations about chocolate. "Don't get me wrong — I love a Curly Wurly," she tweeted on Jan. 15, 2017, "but it's basically just a Chomp doing yoga." Mind blown. Oh, yeah, and she also places high stakes bets on biscuits. "Settle a debate please guys. There’s £100 at stake. Jammy Dodgers — is there a heart shaped hole in one of the biscuits or both?" she tweeted on Jan. 6, 2019. And yep, she lost the bet. That's some high-quality Twitter content right there.

Beyond biscuits, O'Donnell's done quite a lot of Shakespeare, having appeared in Much Ado About Nothing in summer, 2016, according to The Stage. And, according to her bio on the Royal Court Theatre site, she has also performed in a number of other theatre productions, including Yerma and Phaedre.

While she's had a successful career on the stage, you also might recognise O'Donnell from a few other things on the telly. According to her IMDB page, the actress made a one-time appearance on Holby City in 2012, when she played Wendy Weiss, a patient appearing in the episode "Hide Your Love Away."

But O'Donnell's role as 'Tosh' on Shetland is clearly her preeminent performance, and it suits her well, since she's a big fan of detective TV in general. In fact, while shooting in Norway with Scandinavian actors for season four, O'Donnell used the opportunity "to pretend [she] was in The Bridge while [they] were filming,” she told the Scotsman on Feb. 10, 2018.

So, how does O'Donnell compare to her character? “She’s way more organised than me!" she said in her Scotsman interview, adding: "Tosh is really tenacious, ambitious, very career focused. At first I didn’t have a lot of TV experience and she was a rookie, so I feel we’ve gone on a journey of confidence together."

Now she's gained that confidence, you can see O'Donnell in action as she's reprises her role as 'Tosh' in season five of Shetland, which comes to BBC One at 9 p.m. on Tuesday, Feb. 12. 'Tosh' is as fierce as she is funny, and O'Donnell is one of the standouts in an across-the-board excellent show. If there isn't enough to tempt you already, O'Donnell makes another great case for why Shetland should be your next murder mystery obsession.