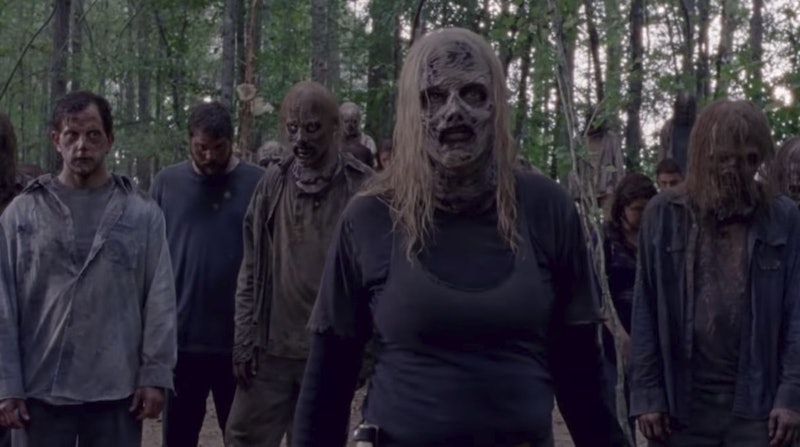 The Walking Dead is officially back and the stakes are higher than ever after the mid-season finale introduced the terrifying and popular comic book group The Whisperers. Now, Michonne, Carol, Daryl, Tara, and their respective communities will have to face Alpha, a new villain who is unlike any previous threat. Many fans of the TV show aren’t familiar with the source material and may be wondering who Alpha is in the comics and what her presence means for the survivor communities. Walking Dead lovers should definitely brace themselves for a shocking and potentially heartbreaking back half of Season 9.

Like the TV show, comic Alpha is the leader of the Whisperers, per Comicbook.com. The group rejects the notion that society needs to be rebuilt and chooses to live among the walkers. She rocks a shaved head and a cold stare underneath her walker mask and is completely ruthless. Alpha's real name, backstory, and how she rose to power within the group is unknown, but her deeds as a leader are absolutely horrific. She is emotionless, cruel, and doesn’t believe in societal constructs — so the Whisperers murder, rape, and pillage communities with reckless abandon.

In the comics, Alpha even allows her daughter Lydia to be sexually and physically abused by others because she believes humans are animals. And, she was responsible for the infamous fair massacre that resulted in several people, including Rosita, Ezekiel, Ken, and Luke, with their severed heads on pikes. Oof, let's hope they skip these parts in the show.

In the end of the comic books, Alpha was decapitated by Negan and the group later fell apart without guidance despite having her second-in-command Beta around for a while. She was certainly a powerful threat and, with the fair happening on the show, several characters will likely by the end of this season. Luke, Rosita, Alden, and Ezekiel might want to watch their backs because their future doesn't look bright.

Alpha’s TV debut has been heavily hyped by AMC with a clip describing her as a dangerous and no-nonsense boss. She's rocking a belt with a snake on it as she silently stares at viewers. The character, who will be portrayed by Samantha Morton, also made a brief appearance in a trailer where the Whisperers were standing outside of the Kingdom. A bald Alpha makes their way through the crowd to confront Daryl, who is holding Lydia hostage in a cell. It was only a couple of seconds, but comic fans were thrilled to get glimpses of the ominous leader.

Alpha's formal introduction was recently revealed with a chilling teaser. The leader is seen with Beta as he sews her mask into place before she addresses our community leaders with an ominous message. “Your people crossed into our land,” she said. “Your people killed our people. There will be conflict. I am Alpha.”

Several people are seen encountering Whisperers before the clip ends with Alpha standing in front of a few loyal followers. Based on these sneak peeks, it seems like TV Alpha will be just as merciless as her comic counterpart.