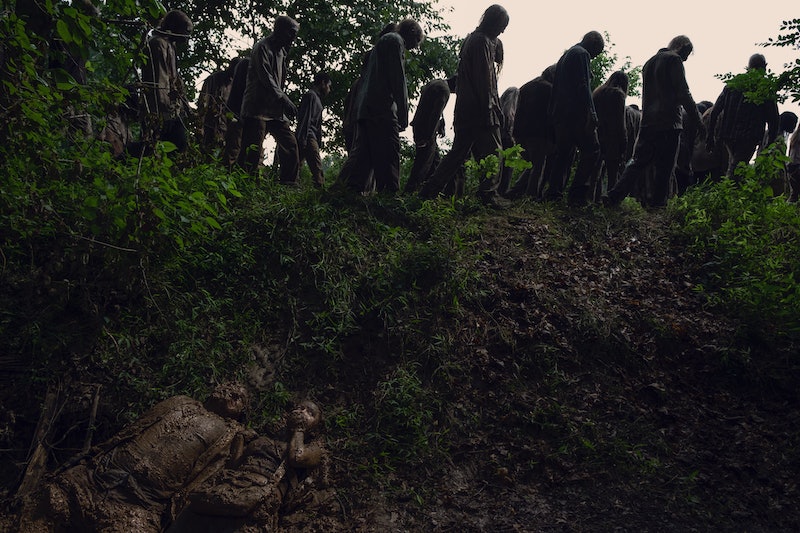 Spoilers for The Walking Dead comics follow. Just because the leader of The Walking Dead is gone doesn't mean that bad guys will stop coming to the AMC series. And "Who Are You Now" hinted that the survivors are about to face a brand new enemy without Rick Grimes. Rosita and Eugene encountered talking zombies on The Walking Dead — well, at least that's what they seemed to be. Fans of the comics know exactly who those Whisperers are and while it may come as a relief that the walkers haven't somehow evolved in a way that allows them to form coherent sentences, the truth of the matter is not much better.

There has been speculation surrounding when the Whisperers would come to The Walking Dead TV series for seasons now. But with Samantha Morton, Ryan Hurst, and Cassady McClincy respectively cast as comic characters Alpha, Beta, and Lydia, the Whisperers are truly arriving in Season 9. What the comic villains are all about was already teased in "Who Are You Now." As Rosita and an injured Eugene hide from a herd of walkers, they hear the ominous whispered words, "Where are they? They must be close. Don't let them get away" coming from the zombies. But in reality, it's a group that appropriately is referred to as the Whisperers who are responsible for those frightening words.

In Robert Kirkman's comics, the Whisperers have survived the zombie apocalypse by disguising themselves as walkers. They wear the skins of the walkers and live and travel among the herds. This allows them to steer and control massive groups of zombies. Their approach means that the walkers don't attack them, but it also comes in handy when the Whisperers want to attack their fellow humans. Because like the Terminus people, the Wolves, and the Scavengers before them, the Whisperers have a truly warped sense of what they need to do to survive.

The Whisperers have regressed to act more like pack animals than humans and Alpha is the leader of their group. She's a vicious leader and makes Negan look like a decent person in comparison. In the comics, the Whisperers accept rape as a regular occurrence within their group and Alpha allows her daughter Lydia to be sexually assaulted. After the Saviors, the Whisperers are the next big villain of the comics. So besides their internal abuse of one another, viewers should expect that they will also try to take down the established communities of Alexandria, the Hilltop, and the Kingdom.

As the company behind The Walking Dead comics, Skybound Entertainment, highlighted, the Whisperers' introduction in the TV show was similar to how they first appeared in the comics. Rather than Rosita and Eugene, Ken and Marco of Hilltop are on a supply run when they must flee walkers. Like on the show, they hide in a ditch and then hear whispers that seem to come from the undead.

Fans will see how the TV series will portray these ultra-evil comic characters as Season 9 continues. But showrunner Angela Kang promised that along with the inevitable bloodshed and death, the Whisperers' storyline will also be pretty entertaining. "There are some twists and turns to this story," Kang told The Hollywood Reporter, "but there will be some answers by the time we get to the midseason finale. It opens up a Pandora's box of other things. Hang on: it's a really cool ride." And knowing what goes down with the Whisperers in the comics, you'll definitely want to buckle up.