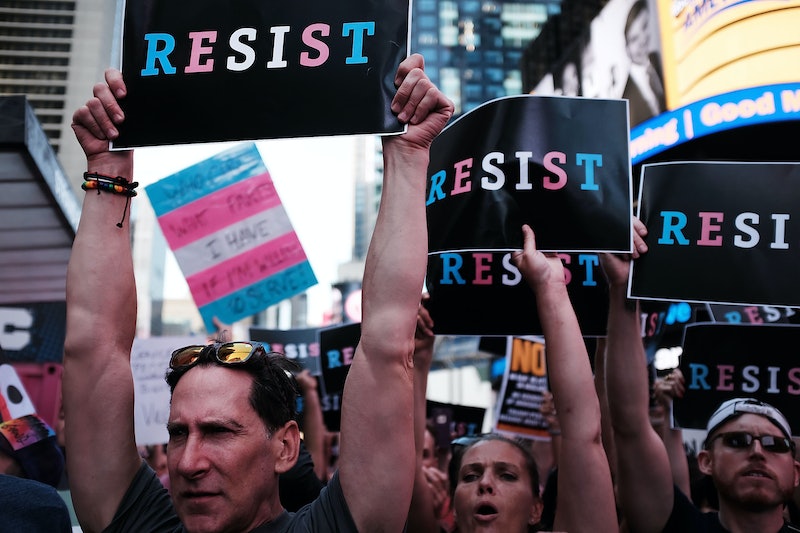 Nov. 7, 2017, was a staggeringly good election day for Democrats, and among the progressive victorious is transgender woman Danica Roem, who beat out incumbent Virginia House of Delegates Republican Robert G. Marshall, author of the infamous anti-transgender "bathroom bill." Roem's victory marks the first time an openly trans person has been elected as a state legislator — however, she won't be the first trans legislator to serve. That landmark achievement belongs to a Black woman: Althea Garrison, who served as a state legislator Massachusetts from 1993-1995.

Like many trans folks, Garrison's time in the public eye came at great cost to her. In 1993, she ran as a Republican candidate for the Fifth Suffolk seat in the Massachusetts House of Representatives, and unlike Roem, she made the decision not to campaign as an openly trans person. She won her election with 57 percent of the vote in 1992, and went on to represent the Suffolk District for one term.

However, shortly after she was elected, a reporter from the Boston Herald dug up Garrison's name change petition and asked her "if she was ever a man," according to The Advocate. The reporter who outed Garrison and published her deadname went on to become one of Mitt Romney's top aides in his 2012 bid for president.

And Garrison, although she's run many times for office since her freshman term (including for Boston City Council, in this most recent election), has never won another seat.

Garrison weathered her outing at the Herald's hands and served her full two-year term, during wich she "consistently voted pro-union and sided with the Democrats on many issues far more often than she did with the Republicans," wrote Monica Roberts of TransGriot. "When she ran for reelection in 1994 her pro-union record earned her endorsements from the AFL-CIO and eight additional unions." But, Roberts said, "It wasn't enough to keep her from being challenged by Democratic rising political star Charlotte Golar Richie."

It should be noted that one large issue on which Garrison diverges from Democrats is marriage equality, and in her 2016 bid to reclaim the Suffolk District seat, she ran as a Republican. In her most recent run for office, she was a nonpartisan candidate.

In the face of this policy that I, as a trans and queer person married to someone of the same sex, find disheartening, we — queer folks, straight folks, everyone — can't diminish Garrison's accomplishments. Though Garrison did not run as an out trans woman, and though she has never publicly discussed being a trans woman, her contributions to our history, like the contributions of many other trans women of color, helped pave the way for Roem's victory. Also like many trans women of color who shaped the modern queer movement, Garrison was subjected to the violence of forced outing and the spreading of her deadname.

Roem, too, had her deadname brought into the political sphere; her opponent, Marshall, went out of his way to bring up her deadname in an interview with NBC. Hopefully, Roem's victory will not only be a wake-up call to transphobes that petty maliciousness won't drive us away, but also encouragement for other trans folks to get involved in politics.

In her victory speech, Roem said, "I want to make a point here that no matter what you look like, where you come from, how you worship, who you love, how you identify, and yeah, how you run, that if you have good public policy ideas, if you are well qualified for office, bring those ideas to the table, because this is your America, too. This is our commonwealth of Virginia, too."

More like this
25 Inspiring Quotes From Black Women To Celebrate Black History Month
By Kyli Rodriguez-Cayro and JR Thorpe
"Lavender Haze" Star Laith Ashley Breaks Down Filming With Taylor Swift
By Jake Viswanath
Gen Z Are Twice As Likely To Identify As Queer, According To New Data
By Sam Ramsden
Ozzie’s Coming Out Scene With Kitty On 'That ’90s Show' Has Twitter Sobbing
By Brad Witter
Get Even More From Bustle — Sign Up For The Newsletter
From hair trends to relationship advice, our daily newsletter has everything you need to sound like a person who’s on TikTok, even if you aren’t.