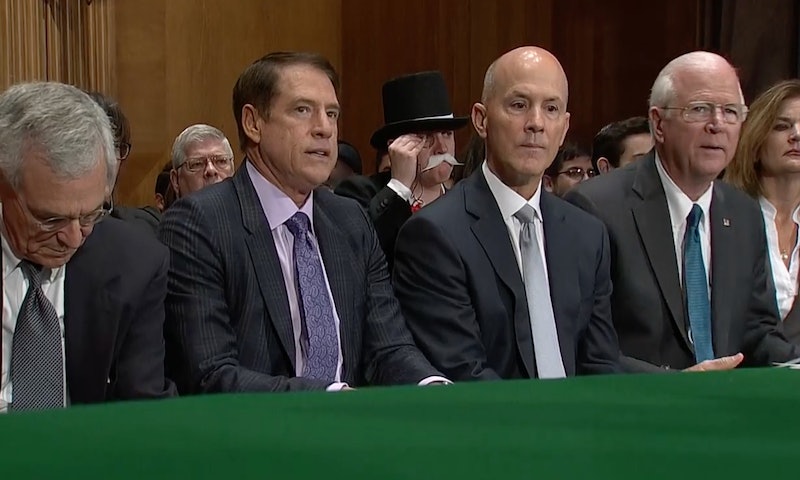 Rich Uncle Pennybags is back in Washington. Better known as the Monopoly Man, activist Amanda Werner attended a Senate hearing donning a board-game-inspired costume for the second time in recent weeks. Attending as an activist for nonprofit group Public Citizen, Werner was captured by photographers in a senatorial hearing about several bills seeking to temper class-action lawsuits.

...The Monopoly Man will be at the hearing to highlight how these bills would do nothing to protect hardworking Americans but would be a boon to big corporations by making it significantly more difficult to hold them responsible for fraud or rip-offs against customers.

This is not the first time that the group has sent the Monopoly Man to several congressional hearings. Last month, Werner dressed in the costume to attend the Equifax hearings. (To refresh your memory, back in September the Equifax data breach led to an estimated 143 million people's personal and financial data being stolen by hackers. After the credit-reporting firm was hacked, current and former officials were called upon to testify before Congress.) Werner sat in the gallery, occasionally twisting their mustache and fiddling with several props, including a monocle and a sack full of cash, according to reports.

Werner returned to the Capitol this week, when representatives from the U.S. Chamber of Commerce were scheduled to testify before the Senate Judiciary Committee in hearings about bills that would reportedly make it more difficult for consumers to band together to sue corporations via class action lawsuits. According to Courthouse News, the hearing specifically focused on bills that would limit how much lawyers can be awarded in class action suits, impose new rules about who can join a class action suit, and would punish lawyers who took up class action lawsuits without substantial evidence for a case.

“The sheer cost of modern litigation, on time, on emotions and on financial resources of the parties involved has become a leveraging opportunity for those who wish to make a quick buck,” Sen. Chuck Grassley said in a statement prepared for Wednesday's hearing.

Werner and Public Citizen disagreed, as evidenced by Wednesday's protest. "When you invite the @USChamber of Commerce, Monopoly Man shows up. After all, they bankrolled my Get Out of Jail Free card," Werner tweeted. (Last month, Public Citizen reportedly sent out "Get Out Of Jail Free" cards to every senatorial office, according to a press release. The cards were intended to represent the leeway allegedly given to banks by the federal government.)

The Monopoly Man stunt has drawn a lot of attention, including from senators who are getting used to the familiar face. "Well, Rich Uncle Pennybags is back in my Committee hearing," Sen. Jeff Flake tweeted on Wednesday.

After the ordeal, however, Werner claimed on Twitter that they were nearly arrested for Wednesday's stunt. In a series of Tweets, they said that once they sat down in the hearing, "A Capitol Police officer told me that if I touched the bag at all during the hearing, I would be immediately arrested. Not removed from the hearing, but booked & arrested." They claimed that they were threatened with arrest again, an hour later, by the same officer: "An hour in, the officer came back & told me the staff considered my leaning forward in my chair - as I routinely do out of costume - to be a disturbance. He told me, on camera, that if I leaned forward again, he would arrest me. He then emphasized this was my 2nd warning."

As Werner tells it, the rest of the hearings went on without incident, but on Twitter they said they believed the exchange to be reflective of free speech issues.