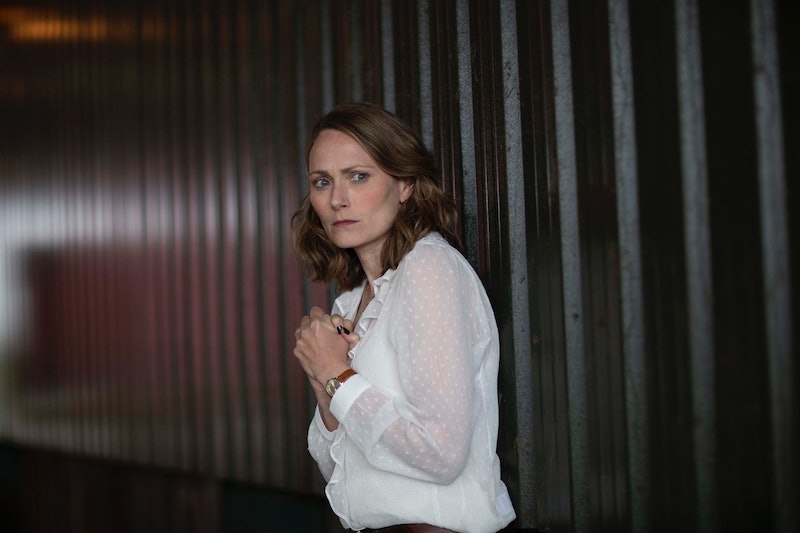 Channel 4 is kicking off the decade with a gripping new crime-drama. Fronted by David Tennant, Deadwater Fell tells the story of a man caught up in a tragic murder case that involves his entire family. In addition to the former-Doctor Who star, the series also includes the likes of The Good Wife's Cush Jumbo, and Anna Madeley — who portrays one the show's most pivotal characters. But who is Anna Madeley? Here's everything you need to know about the Deadwater Fell star.

According to her official portfolio, Anna Madeley is a British actor, with experience in film, television, and theatre. In addition to her many on-screen gigs — which include Netflix's The Crown, the BBC's Silent Witness, ITV's Mr Selfridge, and more — theatre buffs might recognise Madeley from various on-stage appearances, including her critically-acclaimed performance in The Crucible at the Old Vic. According to the National Theatre, Madeley trained at the Royal Central School of Speech and Drama, and back in 2008, her talents were recognised during the Monte Carlo Nymphe d’Or Awards, where she was handed the trophy for best actress.

As the Radio Times reports, Deadwater Fell is brought to us from the writer of ITV's Grantchester, and follows the story of Tom Kendrick (David Tennant) — a well-liked local GP who lives in the tiny village of Kirkdarroch, Scotland, with his wife Kate (Madeley) and three young daughters. Sadly, during one fateful night, Tom's world is turned upside down when his entire family fall victim to a deadly house fire. However, when it becomes apparent that his wife in children weren't killed in the fire, questions begin to emerge regarding what really caused their deaths, and suspicion from nearby village residents quickly falls on Tom.

The four-part series was penned by show-writer Daisy Coulam, who during an interview with the Independent, explained how various other crime dramas had inspired her to create the Channel 4 thriller. Speaking to the publication, Coulam also revealed that the series is "observational and understated," and discussed how she wanted to ensure Deadwater Fell focused on the "commonplace" and was played out "though the prism of ordinary people."

What is sure to be a compelling slice of TV drama gets underway on Friday, January 10, at 9 p.m. on Channel 4, and I don't know about you, but I cannot wait to see this story unfold.

More like this
Helena Bonham Carter Doesn't Think 'The Crown' “Should Carry On"
By Sam Ramsden
Olivia Colman Stars In First-Look Trailer For BBC's 'Great Expectations'
By Sabah Hussain and Sam Ramsden
Twitter Simply Couldn’t Cope With The ‘Happy Valley’ Finale
By Sophie McEvoy
Claire Foy Spoke Out About 'The Crown's Gender Pay Gap
By Sam Ramsden
Get The Very Best Of Bustle/UK
Sign up for Bustle UK's twice-weekly newsletter, featuring the latest must-watch TV, moving personal stories, and expert advice on the hottest viral buys.