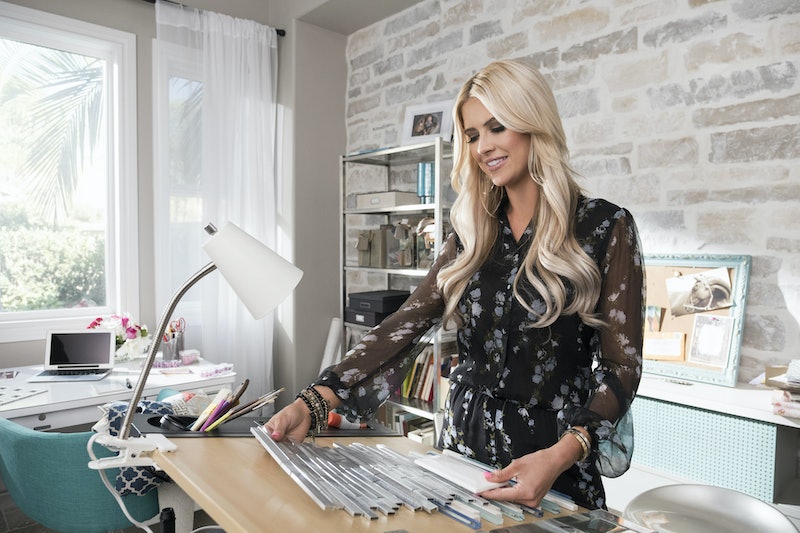 If you're an HGTV junkie, you know all about the drama that's gone down between Christina and Tarek El Moussa. The Flip or Flop co-hosts were married for nearly a decade, then went through a lengthy separation and subsequent divorce. And now, with Christina on the Coast, Christina's new husband Ant Anstead is taking center stage.

If you're behind on the news, Anstead and Christina (who's since taken Anstead's last name) married in a surprise ceremony late last year after just over a year of dating, People reported. And though Americans might be more familiar with El Moussa, Anstead is a TV personality in his own right. He's a car designer who co-hosted the British series For the Love of Cars and recently joined Wheelers and Dealers.

Anstead also recently split from his longtime partner, so he knows what El Moussa has been going through. He tweeted in October 2017 that he and his wife had separated, and that their kids were their top priority. That means he and Christina have a big family — per another People article, Anstead has two children: Amelie, 15, and Archie, 12, while Christina co-parents Taylor, eight, and Brayden, three, with her ex-husband. Not only that, but El Moussa revealed in March that she and Anstead are expecting their first child together.

In terms of their careers, Christina and Anstead are on the same page: they both make a living from their television and creative pursuits. "We have a very similar job so we understand each other's work hours and everything that goes into that," Christina told Country Living. And Christina's ex-husband is onboard with Anstead, too, which always bodes well for former partners trying to raise a family together. "He seems like a good guy," El Moussa said of Anstead in the same Country Living article. "He has kids, he's good to my kids, and I'm happy [Christina] finally found a decent, normal guy. Good for her."

Anstead's social media is filled with the things that mean most to him, which primarily includes Christina and their children. He shared a sweet post on Mother's Day for her, and another post shows that all of their kids get along and love spending time together.

We'll certainly see more of Anstead on Christina on the Coast, especially since Christina has said the show will explore more of her personal life alongside the home makeovers she's known for.

"I had a lot going on last year, and I thought it would be interesting to show a little bit more of my real life," she told the New York Post. "And people love seeing real estate and different houses for sale and it's fun for viewers to get a glimpse into the Newport Beach market, which is quite pricey. It's fun to see the house-hunting process, and what gets you a house on the water versus inland.”

Fans of Flip of Flop will definitely want to tune into Christina on the Coast if they want to see how the host is doing after her split from El Moussa. Thankfully, everyone involved in the situation seems to have found their own happiness.

More like this
Everything To Know About Danna Bui-Negrete From 'RHOSLC'
By Jake Viswanath
We’ve Got A Text! Another 'Love Island' Series Is On The Way
By Darshita Goyal
Twitter Can’t Get Enough Of The Romance In 'Ekin-Su & Davide: Homecomings'
By Sophie McEvoy
Meghan Markle Just Addressed *Those* Wild 'Real Housewives' Rumours
By Sophie McEvoy
Get Even More From Bustle — Sign Up For The Newsletter