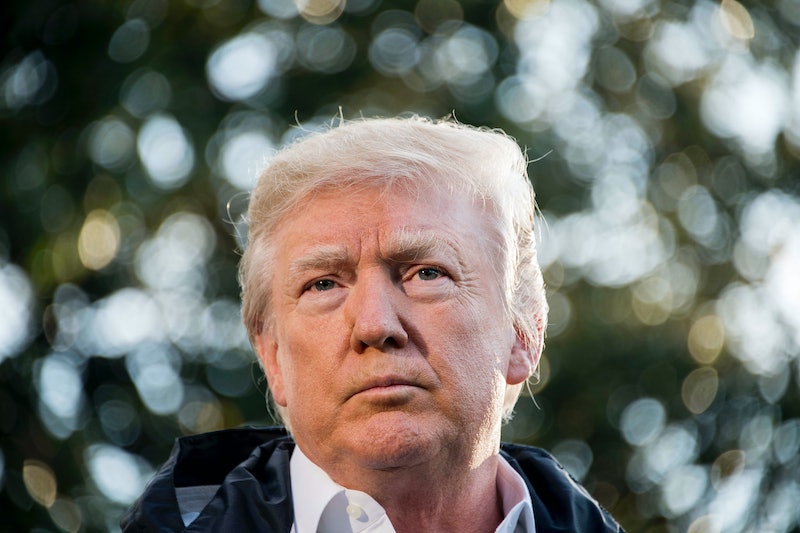 After The Washington Post unearthed taped recordings last year of Donald Trump bragging to Access Hollywood host Billy Bush about grabbing women "by the p---y," former Apprentice producer Bill Pruitt tweeted that, "when it comes to the #trumptapes, there are far worse." Now, Pruitt, who worked as a producer for the first two seasons of the program, revealed that Trump reportedly made racist remarks on The Apprentice about "African-Americans, Jewish people, all of the above," during an interview with NPR's Embedded podcast. The White House reportedly responded to NPR that Pruitt's claims were "the same recycled and false attacks." Bustle has reached out to the White House for comment.

Trump hosted The Apprentice for 14 seasons. Pruitt, who signed a non-disclosure agreement and couldn't go into much detail about the nature of the tapes or what was on them, told NPR's Kelly McEvers that Trump would reportedly make inappropriate comments when he and the producers discussed who they should fire on the show.

When McEvers asked if the comments were just about women, Pruitt responded, "No." He then continued, saying it was "very much a racist issue," and added that the remarks were about "African-Americans, Jewish people, all of the above."

Pruitt then said, "Yep. When you heard these things, there's the audible gasp that is quickly followed by a cough, kind of like (gasping), you know, and then (coughing) — yes, anyway, you know? And then you just sort of carry on."

When McEvers asked if Pruitt ever wished he told Trump not to say those things, Pruitt replied:

That's a really good question. It was not my place to be, hey, TV star, you know, reason we're all here, shut your [expletive] damn mouth, and don't ever, ever repeat what you just said. Of course, you know, you think that. You go back to your hotel room or your apartment that they put you up in. And you know, you do some soul-searching.

Last year, after the Access Hollywood tape leaked, another TV producer, Chris Nee, reportedly took to Twitter to claim that there were additional recordings of Trump using racial slurs, although she has not seen or heard the tapes herself. Nee said she had signed a contract with The Apprentice and would have to pay $5 million if she released footage from the show without executive producer Mark Burnett's permission. In now-deleted tweets, Nee reportedly wrote, "I don't have the tapes. I've signed a Burnett contract [and] know leak fee is 5 mill. Hearing from producers/crew N word is the 'much worse.'" The Trump campaign did not respond publicly to Nee's specific claims.

The Apprentice outtakes are unlikely to see the light of day, according to a report by BuzzFeed News. Burnett is reportedly “pro-Trump and has made clear to his teams that he will sue anyone who leaks,” a source told BuzzFeed News. Users on Twitter have put pressure on Burnett to leak the tapes.

NBC spokeswoman Rebecca Marks also told the Associated Press last year that the network licensed The Apprentice footage from Burnett and couldn't legally release it. “We don’t have the legal right to give out the footage from that show,” Marks said.

Pruitt has expressed regret for crafting a portrait of Trump that might have not been entirely honest. He described Trump as a good "con artist" who managed to make it all the way to the White House, according to McEvers.

“We told a story,” Pruitt said. “We went with beginnings and middles and ends and villains and protagonists, and we went about the business of putting music and picture and sound together. And now all of a sudden we're here. A cultural icon emerged because we weren't necessarily truthful about our portrayal."