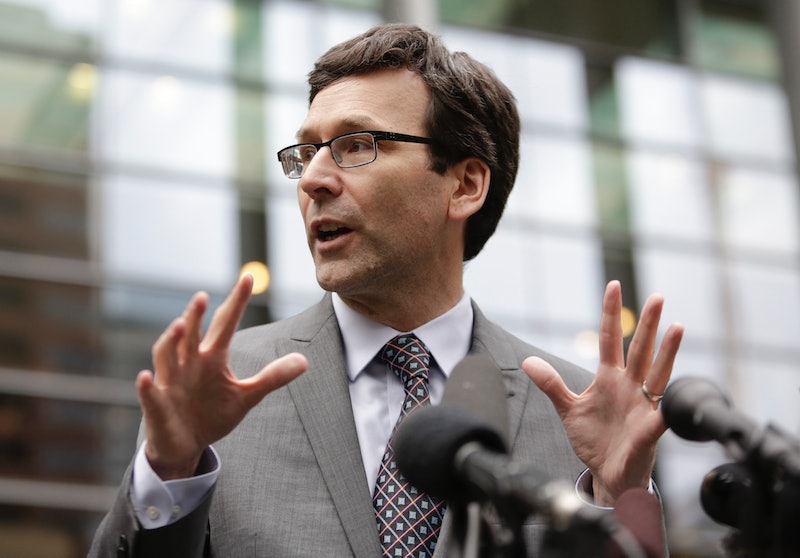 The Trump administration has opposed the Affordable Care Act from the get-go. But after promising to repeal and replace President Obama's signature policy achievement, Republicans have proven unable to make any legislative progress against the ACA. In the wake of that failure, Trump has made some changes of his own to the health care law, including a rollback of mandatory birth control coverage for employer insurance plans. The state of Washington is having none of it, and on Monday, Attorney General Bob Ferguson announced Washington will sue the Trump administration over rollbacks of contraception coverage. It will become the second state to do so, after California.

Ferguson's case against the Trump rollback rests on alleged violations of the First and Fifth Amendments, as well as the Civil Rights Act. Ferguson released a statement that read in part:

The Civil Rights Act prohibits discrimination against women based on sex or the capacity to be pregnant. The rules result in women having less access to reproductive health care, which is discrimination based on their gender.

Trump's new rules for employer coverage allow businesses to refuse to cover birth control on religious or moral grounds. There appears to be no stipulation that employers file any paperwork with the federal government; they are only required to notify their employees of the change.

The rules violate the Establishment Clause of the First Amendment by requiring individuals to bear the burdens of religions to which they do not belong. For example, the rules permit a for-profit business to impose the costs of its owner’s anti-contraception beliefs on employees who do not share those beliefs.

Only women, and not men, may have their contraceptive coverage denied based on their employer’s religious or moral objection. By making a gender-based distinction without sufficient justification, the rules violate the equal protection guarantee implicit in the Fifth Amendment.

Trump's new rules for contraception coverage have already been legally challenged. On Oct. 6, California Attorney General Xavier Becerra also filed a suit against the Trump administration, claiming they were willing to "trample on people's rights" and asked what group Trump's team would target next.

Will they allow businesses to deny you cancer treatment? Will they exclude you from insurance coverage because of a pre-existing health condition? The California Department of Justice will fight to protect every woman's right to healthcare, including reproductive healthcare. We'll see the Trump administration in court.

This isn't the first time Ferguson has taken the Trump administration to court. Earlier this year, he made headlines for leading the legal battle against Trump's travel ban executive order. According to The New York Times, Ferguson was "incensed and offended" by the order. In February, a federal judge temporarily halted the ban from being implemented in light of Ferguson's lawsuit. In April, he made the TIME 100 list over his successful challenge against the travel ban.

The argument for the rollback is that it protects the religious liberty of business owners who are opposed to contraception measures on faith-based grounds. Some of the most vocal critics of the original ACA requirement that contraception be covered have been Catholic organizations, many of which reject any form of man-made birth control outright. There are several legal cases still pending against the Obama-era regulations.

Speaking anonymously to reporters, officials at the Department of Health and Human Services said they anticipate the employer mandate rollback to impact very few women. They estimate 99.9 percent of women who currently have access to free birth control will continue to benefit from the original ACA provision.

But as is true in much of the political sphere, the law's effect may not be as important as what it symbolizes. For millions of women, the ACA's insistence that contraception be covered was a recognition that "women's health" should not be treated as secondary or optional. The Trump administration's rollback will be taken by many as a signal of just the opposite.