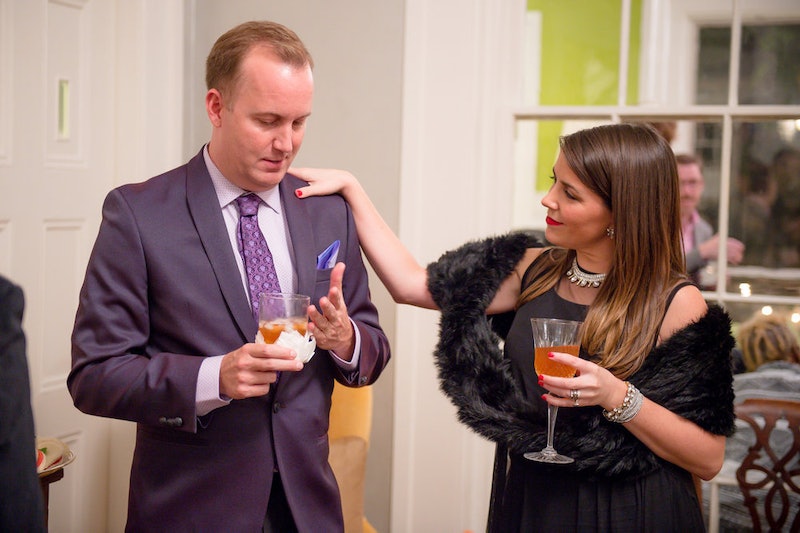 Southern Charm Savannah only got a handful of episodes in Season 1, so we didn’t really get to dive too deeply into the likes, dislikes, and personal business of the cast. Though not a main cast member, Brandon Branch appeared in a lot of Season 1, and his presence was so thrilling to producers that they’ve asked him to be a series regular in Season 2. Just in case you missed it, who is Brandon Branch on Southern Charm Savannah? The interior designer is thrilled to be in the middle of the action in Season 2.

“I am so excited,” Brandon tells Bustle. “I watched the first episode… it’s so fabulous. I’m really proud of it. We’re going to dive in deep this season, and all of the people are really open and honest. We just really dig a lot deeper than we did last season.” Last season, viewers first met Brandon through Catherine, who needed to throw a dinner party — and fast. “I have been friends with Catherine’s parents for years, and [last season], Catherine was having a party at her house, and she basically came over to my house and knocked on my door and said, ‘Please help, we’re shooting this new TV show, will you do a party for me?’” Brandon laughs. “And I did the party and I think I showed up on like eight episodes last season. And then they asked me to be a full-time cast member this season," he adds.

Catherine certainly knew who to go to when it came to throwing a party — Brandon is a gifted interior designer with his own firm, and he knows how to make things look exceptionally beautiful. But his foray into design as a full-fledged career wasn’t apparent to him at first.

“I’ve always loved interior design, and I studied it a little in college, but my grandmother really put a love of interior design into. She really taught me about beautiful flowers, beautiful interiors and fabrics,” Brandon says. “I started buying homes in Savannah, fixing them up, and flipping them, and people started asking, ‘Would you do my house, would you do my house…'” Finally, I was like, ‘You know what? This could be a great business for me to do.’ So I just started doing it.”

Brandon, his husband, Jim, and their very cute dachshund, Simon, live in a lovely home in Savannah’s historic district (of course, they fixed it up themselves), and Brandon says he relishes just being able to walk out the door and stroll around his city. “Living in the historic district, living in these homes that have such history, being able to walk everywhere. I love being able to walk out my door, and I can walk to everything — to the grocery store, to J. Crew, to fabulous restaurants. I love the walkability of the city. And the beauty! It’s like living in a movie set!” Brandon says.

Of course it’s not all fun and games and beauty — besides the heat and humidity (“it’s awful,” Brandon says, laughing), Brandon and the rest of the cast on Southern Charm Savannah find themselves trying to keep up with Catherine and Lyle’s volatile relationship.

“God love Catherine and Lyle, that’s all I can say. It’s been a 16-year relationship, and I think they’re doing the best they can do, and they haven’t lived in the same city in forever, so now they’re back in the same city, and I think they’re trying to navigate their relationship,” Brandon says. “I feel like we’re all trying to navigate their relationship because we all get put in the middle of it.” Brandon likens their evolution to a rollercoaster, dubbing it “fascinating” to watch.

Besides some serious drama with Catherine and Lyle, what else can viewers expect from Southern Charm Savannah? Brandon is excited about audiences getting to know the cast on a deeper level than last season.

“I think you’ll get to see Jim and myself and our relationship. I think you’ll see us go to Turks and Caicos, which is a big trip that we all take. Leaving the country lets our guard down, so we really open up, and as they say in the promo, let our freak flags fly, which is a lot of fun,” Brandon says. “And I think everybody really dives deep into their relationships this season… you’ll get to see where people are coming from and what’s going on in everyone’s lives more this season than last season.”

From what we’ve seen in previews of Southern Charm Savannah Season 2, Brandon seems to act like a one-man Greek chorus, largely staying out of the fray, but keeping close watch. Brandon is all of us, watching, observing, and commenting on the chaos that is reality television — and it’s going to be really fun to watch.