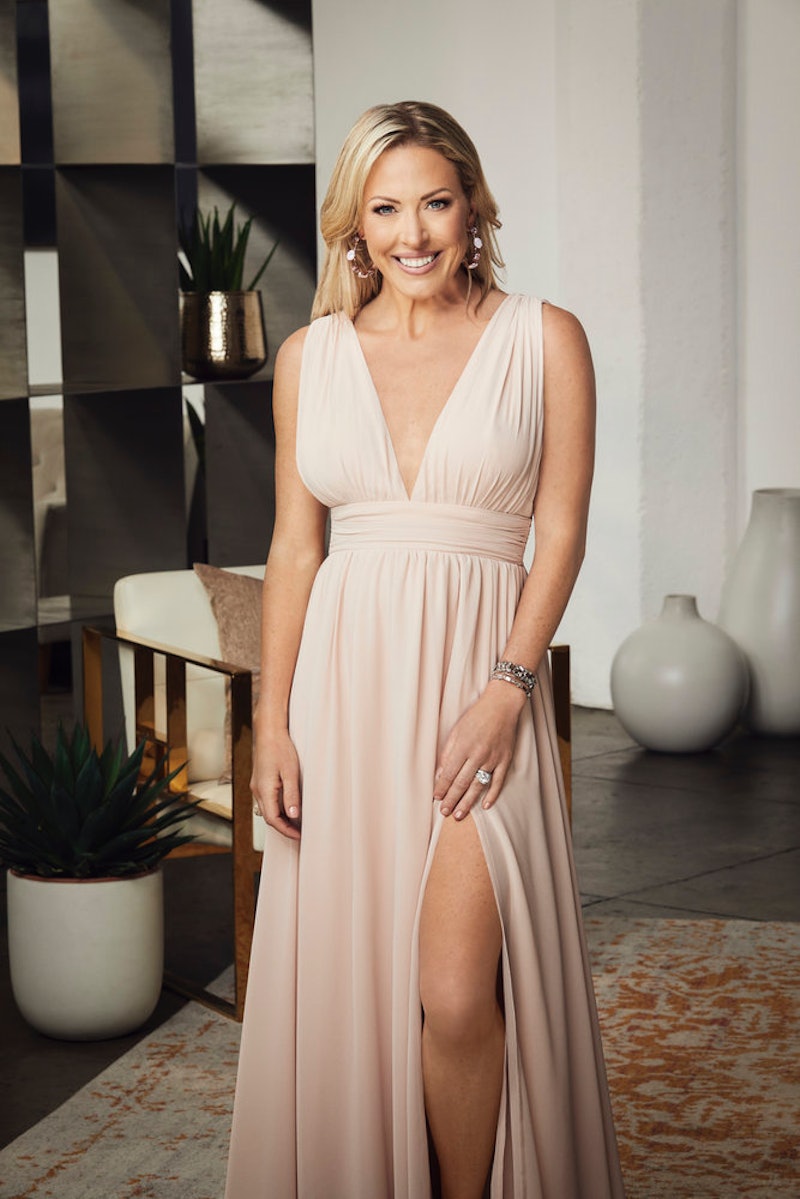 A new Real Housewives of Orange County season is upon us, which means that there's an addition to the show. Braunwyn Windham-Burke is joining Real Housewives of Orange County for Season 14, along with her husband Sean and seven kids. Yes, SEVEN. Joining the show is a major turning point in Braunwyn's life. In an August interview with People, Braunwyn revealed, "Before I got cast on Real Housewives, I was sitting in my bed and I was crying. I looked at my husband and said 'I have to have something else. I have been a stay-at-home mom for almost nineteen years and I need something that's just for me."

Even with all the drama that comes with reality TV, joining the show has changed Braunwyn's life for the better. She explained, "This has been the most amazing opportunity. I have gone outside my comfort zone. I've learned a lot about myself. I've had a great time." She even declared, "I feel like becoming a Housewife is one of the best decisions I've ever made because it made Braunwyn a fully-formed person instead of just a mom." Talking in the third person is also a #TotalHousewivesMove

To put things in perspective, Braunwyn revealed, "I've almost been breastfeeding for eighteen years straight." She even joked, "For the most part, I have had a baby either inside of me or on me for eighteen years now." As if she wasn't busy enough before, Braunwyn has a lot to more to juggle now that she is a reality TV star. She brings a lot to the table.

1. She Married Her Childhood Sweetheart

In an August 4 Instagram post, Braunwyn declared, "The best part about marrying your childhood sweetheart is that you never have to grow up." Still, being with a person from so long does come with some challenges.

In an interview with People, Braunwyn discussed how she has become more independent since joining RHOC. She explained, "I learned that I can't always rely on my husband. I've been with my husband since I was eighteen, so a child, so I had to stand on my own two feet for the first time in my entire adult life. And that was not always easy."

2. She Is Done Having Children

Braunwyn told People, "We have seven kids, which was not always the plan. The plan was to have five, but when we got to five we realized we weren't complete. We felt like someone was missing. We had a sixth. Someone was still missing. And now with Hazel, the baby, I can kind of look at my family and go 'everyone that's supposed to be here is here.'"

So what about another child? Braunwyn declared, "There is no chance of having baby number eight. We did IVF for our younger kids. We are out of embryos. We are done. Seven kids is a lot." It really is.

3. She Knew Kelly Before The Show

On July 24, Braunwyn posted about joining the show on Instagram. She told her followers, "I can’t wait to share it all, even the rough parts, thank you @kellyddodd for bringing me in to this crazy world with you!"

Braunwyn also told People, "She has taken me under her wing, not just on the show, but in Newport Beach in general, So, she has introduced me to her friends off the show and we hang out all the time." Aaww.

Braunwyn shared her love for RHOC in an August interview with People. She shared, "Before I was cast, I was a huge fan. I grew up in Orange County and as I moved around the country, it was always sort of my tie to home. So, I grew up with this show."

She continued, "I'm a fan of all the Housewives shows, but particularly the OC. This is where I'm from. I grew up in Laguna in the '90's." She was such a big fan that she admitted, "I think when I first met Tamra [Judge], I kind of giggled."

5. She Has "The Most Friction" With Tamra

In an interview with People, Braunwyn divulged, "If I had to pick the person I had the most friction with, it would probably be Tamra, but [she] is also the person who made me face a lot of the issues with myself and kind of brought the best out of me."

Braunwyn recalled, "She didn't give me an easy time, but... she really brought the best out of me, even when I didn't want it to be brought out." And that is why Tamra is a veteran Housewife: she knows what she's doing.

In Braunwyn's cast member bio on the Bravo website, there's a blurb about her "escaping to her love shack with her husband Sean." The new Housewife elaborated on the concept in an interview with People.

She began, "The love shack started in Miami. We had a house and then we had this place that we would go to because at the time we had a live-in au pear, a nanny, six kids, a housekeeper. Our house was always full. So, we had a place to go to where we could kind of date each other." Braunwyn added, "We used to joke that it was like having an affair with your own wife or husband. We would meet in the middle of the day. It was near his office."

Now that Braunwyn is back in Orange County, she and Sean have a new love shack. She teased viewers, "You'll see it during the season. It's not child-friendly. It's made for bad choices and debauchery."

7. She Thinks Vicki Doesn't Know Who She Is

In a very candid interview with People, Braunwyn admitted, "Some of these women I connected with right away. Some of them took a little bit longer to warm up to. I think that Vicki [Gunvalson] and I probably had the slowest start."

She even remarked, "I joke about the fact that I don't even think she knew I existed until maybe like a week ago. Her first impression, she walks right past me and was flirting with my husband." Well, at the very least, it sounds like Braunwyn and Vicki's dynamic will amount to some interesting television.

Real Housewives shows are famous for the drama, but it turns out that's not Braunwyn's forté. She admitted to People, "I avoid conflict, which is hilarious going onto a show that is known for conflict. I am a people pleaser and I hate conflict. And then I learned that I run from it, figuratively, and literally, you'll see as the season progresses."

Yes, she literally runs away from conflict in the trailer for Season 14. It is very reminiscent of Tamra's infamous escape from the cast dinner in Bali during Season 9.

Braunwyn may be new to the Real Housewives landscape, but she already has friends on other shows. In July, Braunwyn hung out with Real Housewives of Dallas stars Kameron Westcott and Kary Brittingham while they were visiting California.

Braunwyn isn't the only mother who has wanted to do something for herself outside of the family, but she is one of the few who has done so in such a major way: becoming a Real Housewife. Braunwyn feels blessed to be on RHOC, but the show is just as lucky to have Braunwyn on board.