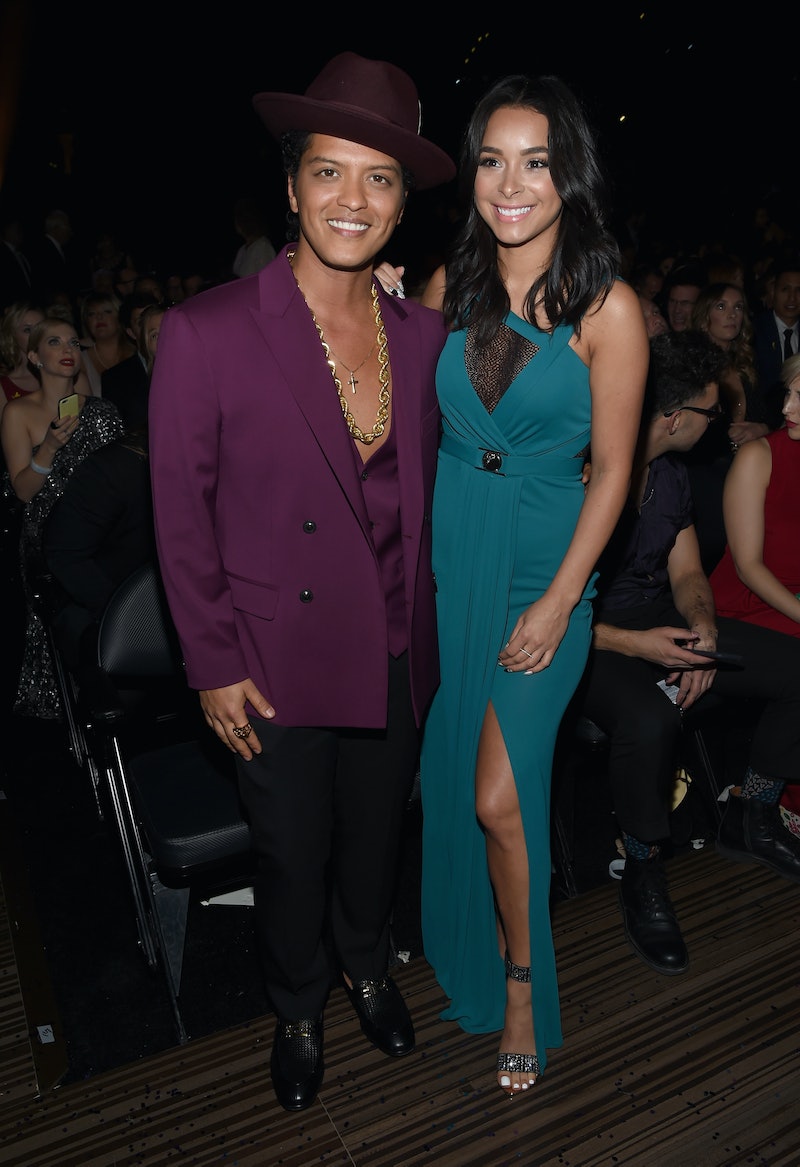 There are some celebrities who choose to keep their personal lives as private as possible. For example, you may be wondering who Bruno Mars is dating, because you never really hear anything about his love life. Believe it or not, but the "Finesse" singer has been with the same person a lot longer than you probably realize.

First of all, Mars is dating Jessica Caban, who is quite the success. She's a model, who was also crowned the first winner of the reality competition show Model Latina on Sí TV. As a result of her win, she won a $10,000 contract with Q Management, per Latina. Now, the 36-year-old has her own swimwear line, J. Marie Swimwear.

Caban's also starred in a handful of Jane the Virgin episodes as Sonia, an employee at The Marbella hotel. JTV fans should also recall Mars was in the Season 2 finale when he played at Jane and Michael's wedding reception. Actually, in that same episode, Caban can be seen standing with the rest of the wedding guests.

According to PopSugar, the two have been together since 2011, which means they've been dating for seven years. That's a long time to call someone your significant other. PopSugar also reports Emily Herbert, the author of the Bruno Mars biography, wrote the two first met in New York City. The "Treasure" singer supposedly spotted Caban at a restaurant and he approached her. The rest is apparently history.

If you want to see how in love they are with one another, just check out Caban's Instagram. Her page is filled with cute photos and sweet messages for her man. As for Mars, well, he clearly likes to keep his relationship with Caban to himself. Currently, she's not anywhere to be found on his Instagram. That doesn't mean he isn't proud of their love or embarrassed of Caban, but it just goes to show you how important it is for the 24K Magic musician to keep as much of his private life, private.

In an April 2017 interview with the Evening Standard, the publication reported not only were they living together in the Hollywood Hills, but that Mars remained tight-lipped about Caban.

In January 2017, the 32-year-old singer briefly opened up to Latina about what relationships and love mean to him. While discussing his late mom, who died in June 2013 of a brain aneurysm, Mars said, "The woman who taught you to love, showed you what a woman is supposed to be." He later said about how he is when it comes to relationships, "It’s all in. And that’s what keeps that fire going."

According to a November 2016 interview with Rolling Stone, in a rare moment, Mars actually commented on Caban. The magazine asked the "Uptown Funk" singer if he would ever marry her and Mars replied, "Jesus!" He continued, "She’s my best friend. My rock. What’s wrong with that? We’re just happy."

In a May 2013 chat with Rolling Stone, Mars revealed he wrote "When I Was Your Man" about Caban, because he felt like he might lose her at that time in his life. According to the magazine, he became so uncomfortable talking about the song, Mars declared, "I’m not answering any questions about this song. It’s too close to home." To be clear, unlike in the song, Caban never left Mars for someone else. As Mars told Rolling Stone, their story "was a happy ending."

He also admitted Caban is his OTP. "When you find that one, you buy them flowers and you hold their damn hand," he told the music publication.

Well, seven years later, Mars is still "all in" with Caban. Even though he prefers not to discuss his relationship, it's clear he's super in love.