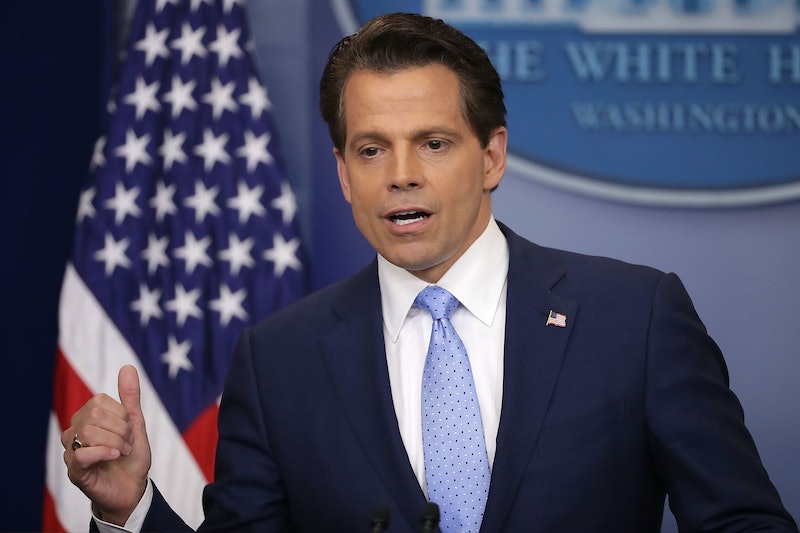 Despite working on Capitol Hill for just 10 days, former White House communications director Anthony Scaramucci has continued to make headlines. Carrying on the trend, Tufts University postponed an event on Monday featuring the financier because Scaramucci threatened to sue a student journalist and the school newspaper over an unfavorable op-ed.

The Tufts Daily newspaper published an op-ed by graduate student Camilo A. Caballero that Scaramucci claimed was "false and defamatory," prompting Scaramucci's lawyer to demand an apology. "Mr. Scaramucci is ready to take legal action to correct these false and defamatory statements — and to prevent any further damage to his reputation — but will refrain from litigation if you retract the false statements and issue a public apology," wrote his attorney, Samuel J. Lieberman, according to documents obtained by The Boston Globe.

Caballero's op-ed called Scaramucci "an unethical opportunist" and asked the former comms director to give up his position on an advisory board for Tufts’ Fletcher School of Law and Diplomacy. Before his attorney got involved, Scaramucci reportedly wrote directly to Caballero, warning him an email: "Back it up or you will hear from my lawyer." According to the Globe, Scaramucci also told him, "You may have a difference of opinion from me politically which I respect but you can’t make spurious claims about my reputation and integrity."

Part of Caballero's Nov. 6 article that Scaramucci took issue with read: "A man who is irresponsible, inconsistent, an unethical opportunist and who exuded the highest degree of disreputability should not be on the Fletcher Board." He added:

"If his credentials lie in the billions of dollars he made on Wall Street, then we have, as a school, abandoned our principles and vision. If Scaramucci can have a seat on our board, then Martin Shkreli, 'the most hated man in America,' is worthy of an invitation to sit as well."

The letter from Scaramucci's lawyer to Caballero and the paper also specified quotes he claimed were "egregiously false," including one that called Scaramucci "the man who sold his soul in contradiction to his own purported beliefs for a seat in that White House." It also cited a quote calling Scaramucci a "man who makes his Twitter accessible to friends interested in giving comfort to Holocaust deniers."

Scaramucci, a Tufts alumni, was scheduled to speak at the school on Monday. The event stirred controversy even before he threatened to sue the The Tufts Daily. More than 200 students and university staff signed a petition calling for him to be removed from the law school’s board. Scaramucci tweeted that he wanted to come to the school Monday to open a dialogue with students about the petition.

“I was ready to come to the school, that’s an open debate. Nobody is going to call my ethics into question without a fight,” he tweeted at a Fletcher professor who said Scaramucci might be invited back if he stops threatening students. The former White House official added: “I asked for an apology for defamatory statements. That is a teachable moment professor. The student is an adult, let his actions stand without any coddling.”

A spokesperson for Tufts told The Boston Globe that the event won’t take place until the threatened legal action is off the table. “We’re disappointed that Mr. Scaramucci has taken this action,” spokesman Patrick Collins said. Scaramucci hasn't implied that he'll do so, though, doubling down on Twitter by responding to multiple tweets about his threat to the newspaper. "You are entitled to your opinion but don’t politicize defamation," he replied to one user.

Although he made it crystal clear online Monday that he wants an apology for the critical words written about him, the newspaper has taken no such action. Time will tell if he actually sues Caballero or the student paper for calling him an "inconsistent, unethical opportunist."