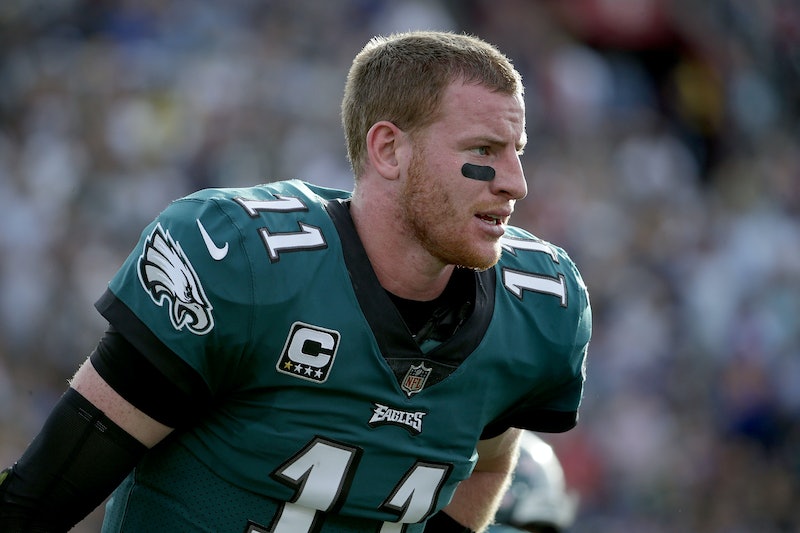 Carson Wentz is a relatively new addition to the NFL, but he's caught the public's attention for a variety of reasons. He's a talented quarterback who, is headed with the Eagles to the Super Bowl on Sunday, but fans' interest isn't all football-related. At least a few of you must be wondering if Carson Wentz has a girlfriend.

The Eagles player has made a name for himself as a down-to-earth guy, holding his faith, his family and his team close. NBC News recently detailed his loving relationship with his brothers. He spoke to Delaware Online about how his faith helps him strive for his goals. His teammates refer to him as "a warrior" and "a great leader." Also, he's cute as a damn button.

Wentz was previously linked to Melissa Uhrich, who, according to a New York Post piece from 2016, was his high school sweetheart. The player also apparently tweeted a photo of himself and Urich on Valentine's Day of last year, though the photo has since been deleted. Though Wentz hasn't appeared to publicly comment on any potential breakup, it seems like he's had a new woman in his life in recent months. This was commented on in the Philadelphia Eagles sub-Reddit by some who noticed an unfamiliar face in one of Wentz's Thanksgiving photos. "Is that a new girlfriend for Carson???" wrote Reddit user jorgesnoopy. "RIP the cutie Melissa Uhrich," added carlstones. Another user, mzajac14, pointed out that photos of his previous girlfriend had apparently been removed from his Instagram account.

While it's unclear exactly who exactly the woman in his more recent photos is, some internet sleuths on Reddit have tried to identify her., Besides some photos, Wentz hasn't publicly comment on the relationship, though, so take the fan speculation with a grain of salt. One caption does reveal his possible new girlfriend's first name, however.

"New Christmas tradition at the Wentz house! Gingerbread cookie decorating battle... because everything is a competition... even on Christmas," Wentz wrote on Instagram over the holidays. "Safe to say Maddie and I took the cake on this one. Merry Christmas everybody!"

Whoever she is, the two look happy together, and if the relationship continues, we may learn more about her. Though the apparent separation from his ex was surprising for Wentz's fans, the internet seems very happy for him, especially amidst all the struggle he's faced lately.

Though he helped carry a team to the biggest championship in American football, he didn't do so without some bumps in the road. Wentz isn't going to be on the field on Sunday due to a knee injury sustained back in Week 14, according to CBS Sports. In the absence of the starting quarterback, Nick Foles has stepped up to finish the team's season, but Wentz hasn't disappeared from the spotlight. He continues to support the team as they work toward this monster of a goal.

“I think he smiles more now than he even did before the injury,” tight end Zach Ertz told USA Today. “To see him there, supporting everyone, you can tell how much it means to him. That speaks volumes about him as a teammate.” Despite the fact that the 25-year-old is early in his career, it's clear even more seasoned players appreciate Wentz's presence, regardless of his ability to play. “He was a very positive influence on the field and he is still a positive influence after he got injured,” wide receiver Torrey Smith said in the same USA Today piece. “That’s important If you’re trying to carry on the momentum.”

Though he maintains a positive attitude, Wentz has said that it's not exactly fun being unable to play. "As humans we all want to be the competitors that we are and be out there on the field. Every time the offence runs out there on the field on Sundays it is tough and it hits me a little bit," he told USA Today. "But then I am in it, because I love these guys and I am a part of this team just as much as anyone else. I couldn’t be happier for Nick."

Having a solid support system off the field certainly won't hurt Wentz's recovery, so it's great that he's got someone by his side as this journey continues. Hopefully for Eagles fans,, he'll have even more to be happy about come Super Bowl Sunday.