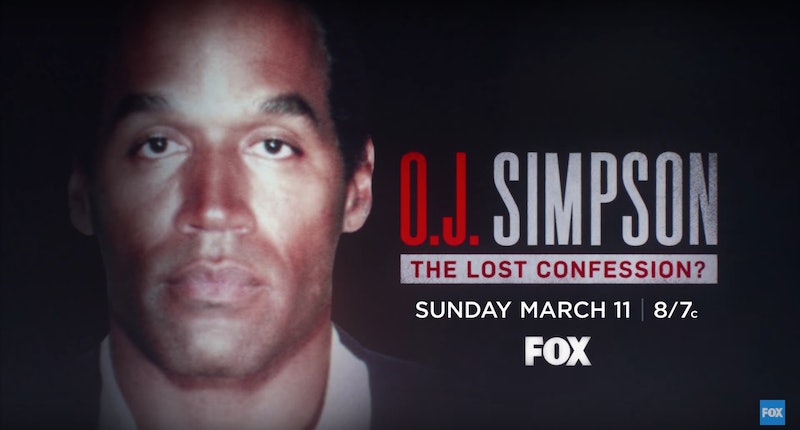 On Sunday night, Fox dredged up a case that's driven America wild for decades. Nicole Brown Simpson and Ronald Goldman's murder trial may have been decided over two decades ago, but people are still fascinated over her husband's chilling hypothetical account of the crime. During Fox's special, O.J. Simpson's hypothetical confession involves someone named Charlie. Even some members of the show's panel were baffled over the hypothetical accomplice and his identity.

During O.J. Simpson: The Lost Confession?, Simpson said that a guy named Charlie joined him when he went to Nicole's house on June 12, the night she was murdered. He emphasizes that this is a hypothetical scenario. He goes on to describe what would've happened that night if he were the one to murder Nicole and Goldman.

To begin with, this whole hypothetical description of the double-murder is a confusing concept. Adding an unknown character into the picture makes things even more convoluted.

During the interview, he continued to explain how the situation intensified when he and Charlie hypothetically confronted Nicole and Goldman. After Goldman supposedly got aggressive, Simpson claimed Charlie followed him into the house.

At that time, I think Charlie had followed this guy in, to make sure there was no problem, and he brought in the knife. I took the knife from Charlie, and to be honest, after that, I don’t remember, except I’m standing there and there’s all kinda stuff around. Blood and stuff.

And here's where things get a bit blurry for Simpson. He simply emphasized how much blood there was.

It’s hard for me to describe it. I didn’t think anybody could be murdered the way they were without everybody covered in blood. We’ve all seen the grisly pictures after. Everything was covered, would have been covered in blood… It was horrible. It was absolutely horrible.

But The Lost Confession? wasn't the first time audiences learned of Charlie. The unknown figure's name also showed up in the book If I Did It. The book, published in 2007 and written by a ghostwriter, outlined Simpson's hypothetical account of his wife's murder. In fact, the 2006 interview that didn't air until this Sunday was initially meant to promote that book.

Though he nonchalantly went into intense detail about the gristly murders of his wife and her friend in the book and the interview, he insisted throughout the Fox special that he was not guilty. In fact, he thinks the two victims figuratively killed him.

It's almost like Ron and Nicole were physically dead, and it's almost like they killed me. Who I was, was attacked and murdered also in that short period of time. And once again, to this day, it bugs me that it seems that people wanted me to be guilty. And that really really really bothered me.

Still, it's mysterious characters like Charlie that make people wonder if Simpson's account was, in fact, hypothetical. Some viewers, for example, have suggested that Charlie and Simpson are the same person, because Simpson began using first person while hypothetically describing the murder. During a teleconference with reporters before the 2006 interview with publisher Judith Regan aired, executive producer Terry Wrong hypothesized that Charlie could actually be an alter-ego Simpson created. But it's possible the world will never really know if this is true. It's possible Charlie's identity will always remain a mystery — just like the murder of Nicole and Goldman decades ago.