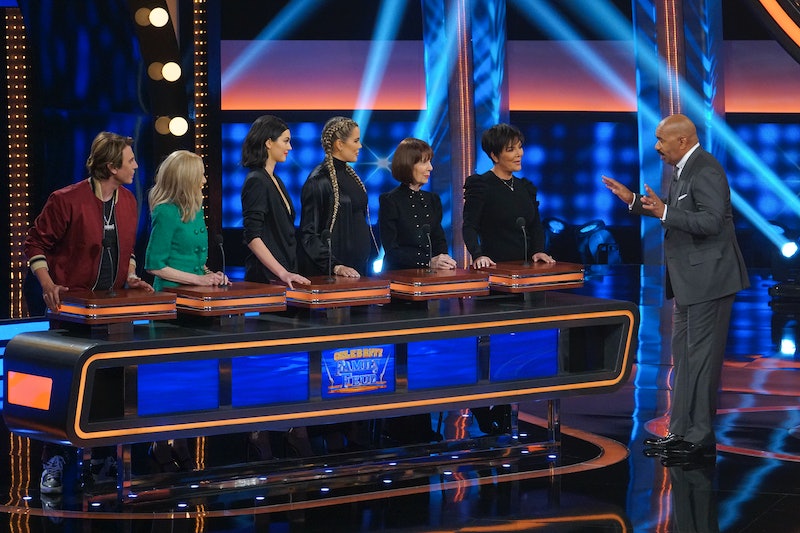 June 10's Family Feud episode is gearing up to be a television event you won't want to miss. Yes, there are only a few more sleeps until the Kardashian-West Family Feud episode is upon us, and many members of the famous family will be in attendance. However, in analyzing who might play fast money or if Kim will sink or save Team West, first get to know the non-superfamous members of the team. For instance, just who is Kardashian cousin CiCi Bussey?

Bussey is one of six members of Team Kardashian (the others are Kris, Khloe, Kendall, grandmother Mary Jo "M.J." Campbell and family friend Jonathan Cheban) battling for a Feud victory. Yet despite her close proximity to the reality television royals, little is actually known about Bussey. However, she has been making appearances on KUWTK since the show's second season in 2008. Yes, from warning the Kar-Jenners about Scott Disick's alleged infidelity in 2015 to encouraging Kourtney to skip a trip to Egypt with boyfriend Younes Bendjima in favor of staying home with her kids, Bussey has been loyal to her fam from day one.

But her allegiance to the Kardashians runs deeper than a few on-air cameos. Bussey also managed the short-lived Kardashian Khaos store in The Mirage in Las Vegas from 2011 to 2014. On the heels of the Kardashians' successful chain of Dash stores, the family entrusted Bussey to oversee a store that involved "media and women’s health, fitness and lifestyle," per VegasNews.com. But though the business relationship between Bussey and the Kardashians ended, Kim said Bussey plays an integral role in commerce and companionship. Kim tweeted in 2013:

"Cici Bussey, my cousin, runs Kardashian Khaos, our store in The Mirage in Las Vegas. We could not survive without her! She is the most amazing friend, cousin, and partner!"

The tweet came as part of a plea on behalf of Kim for any followers of Armenian heritage to help Cici in her decades-long battle with cancer.

"We are asking every Armenian who reads this message to reach out to the bone marrow registry and sign up so that we can find a match for Cici."

To all my amazing followers ... this is one of my favorite pictures of our precious beautiful cousin Cici who we love and adore!!!! Today I am asking that you all pray for her. She has been fighting cancer for two decades and is the strongest most amazing woman I know who every day goes to battle with a smile on her face and kind words for everyone she meets.... you can even hear the smile in her voice when I talk to her on the phone each day.. she is now facing the greatest challenge of her life.... A Stem Cell transplant...and I am asking you to pray for her that this procedure be successful and she makes a full recovery!!!!! Thank you all in advance for your prayers and support it means the world to us and our family...

Kim revealed on an episode of KUWTK, as reported by Life and Style, that Bussey is the only person from Robert Sr.'s side of the family that they are still connected with. After Kris and Robert split, Bussey (first cousin of Robert) remained close with her cousin-in-law in an effort to know Kourtney, Kim, Khloe, and Rob. This decision is one that apparently led to strain between Bussey and members of her own brood.

But, decades later, Bussey's decision to stick with Kris, and all of her K-monikered family, has endured. A stroll through Bussey's Instagram and Twitter shows her on various outings with the Kar-Jenners and in full support of their slate of projects. From attending 2013 Paris Fashion Week with Kim, to showing off Kylie's beauty products, to posting the most epic throwback photos of our favorite reality family, Bussey's got nothing but love for her Feud team members. Plus, her birthday shoutouts on Instagram are the sweetest.

Despite the Family Feud episode being shrouded in drama, from the Hiltons dropping out last minute to Kim joining Team West, there's no controversy here: Cici Bussey is Team Kardashian.