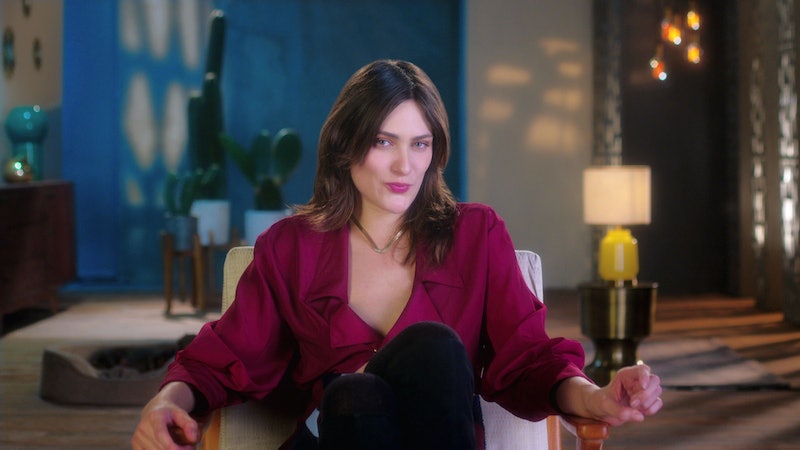 Reality TV fans seemingly never tire of getting a birds-eye-view into the lifestyles of the rich and famous. After all, Keeping Up With The Kardashians has been on the air for about a thousand years, give or take. That interest clearly extends beyond the United States borders, because Netflix's new reality series Made In Mexico, which will premiere on the streaming service on Friday, Sept 28, will focus on the lives of nine socialites living it up in Mexico City's elite social circles. One of those who will surely be at the center of it all is Columba Diaz, a cast member and buzzing Mexico City socialite. But who is Columba Diaz?

Columba has achieved her status as one of Mexico City's elite as a high profile model. Forbes describes Columba as "a high-fashion model who is the life of the party" and according to Fashion Model Directory, she has appeared not only in runway shows for designers such as Alessa Casati, Alice + Olivia, and Cesar Arellanes, but also in a print editorial for Vogue Mexico as well as campaigns for Chocorroles and Coca Cola Zero. Clearly Columba has had an incredibly successful career even before nabbing the reality TV spot.

According to the Forbes description of Columba, the model is certainly single, but not exactly ready to mingle. The description reads that "the highly sought after bachelorette discovers herself in the middle of a love triangle, but wants nothing more than to focus on her career and philanthropy work." And that feeling was echoed in the Netflix trailer for the show. "Pepe and Roby are fighting for my attention," Columba confides laughingly to the camera, "But I don't know what to do."

According to Variety, Pepe Díaz, a fellow Made in Mexico cast member, is "a successful 35-year-old entrepreneur and nightclub impresario keen to shed his playboy past and start a new life," while Roby Checa is the "bad boy of the Checa clan who tries to find a happy balance between his urge to party and prove to his family that he can succeed in business." Columba is caught in the middle, and while the situation might be uncomfortable for her, it will surely provide hours of entertaining drama for fans of the show.

Even if Columba finds herself unhappily in the middle of a love triangle, judging by her Instagram page, the high-fashion model has not let relationship drama affect her life or career. She regularly posts beautiful professional fashion shots, as well as personal photographs and selfies of her daily life, whether she's vacationing somewhere beautiful, heading to a black tie event, or just hanging out at home. Clearly Columba is an independent woman who doesn't need a relationship to be happy, no matter whether she choses to be with Pepe, Roby, someone else, or no one at all.

But this is a reality show after all, and more than a little drama is to be expected. Columba will likely be at the center of this love triangle all season, if not caught in the middle of a whole bunch of other tiffs, disagreements, and misunderstandings. Will tables be flipped? Maybe not, but one can only dream.

More like this
‘The Ultimatum: Queer Love’ Is Officially On The Way
By Radhika Menon and Kadin Burnett
Netflix's 'Bling Empire' Season 3 Trailer Includes A 'Selling Sunset' Cameo
By Kadin Burnett and Sam Ramsden
Here’s When You Can Expect More ‘Indian Matchmaking’
By Brad Witter
Here's How To Apply For 'Love Is Blind,' No Matter Where You Live In The US
By Grace Wehniainen
Get Even More From Bustle — Sign Up For The Newsletter