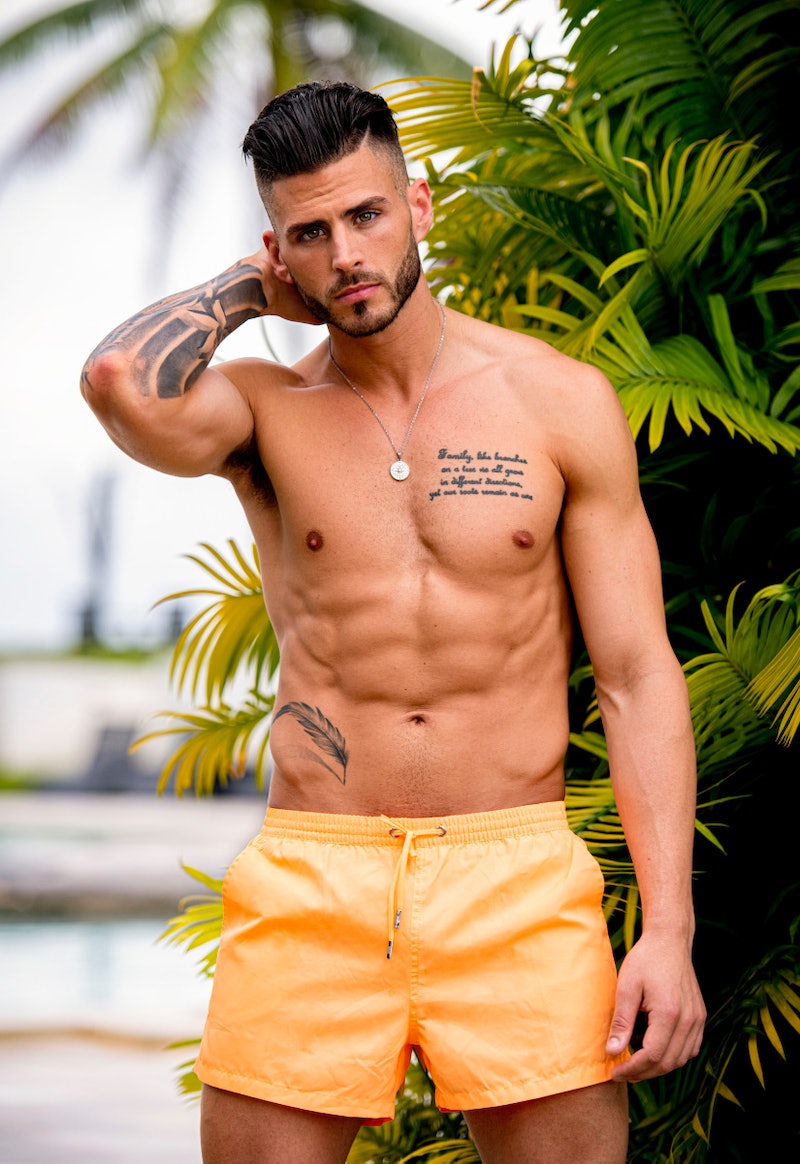 The odds at this week's recoupling ceremony may actually be in Caro's favor on Love Island now that two new boys have entered the competition. Dylan and Cormac joined the villa on Love Island and while they didn't meet the Islanders in Episode 2 — drama is impending.

"If I went to college," said Cormac in his introduction confessional, "I'd have a degree in women." OK, noted. He's Irish, a night club promoter, and he lives in New York City. He also has a tattoo, which if you were squinting at your screen trying to figure it out, reads, "Family, like branches on a tree we all grow in different directions, yet our roots remain as one." That's a wholesome sign, at the very least.

He's ready for love AND he's ready to turn heads, he said. Cormac is also a model, according to The Sun, because like... of course he is. Everyone on this show is. The same publication also reveals that Cormac has a sister and four brothers (which explains the "family" tattoo), a rugby background, has also lived in Australia, and claims he has been "dubbed the Irish Zac Efron" — clearly not of the High School Musical era, though.

Cormac also works out a lot, which is not surprising but well documented on his Instagram.

Will he turn Caro's head, the sole single gal at the villa? Or Kyra's? Or one of the other girls? Zefron comparisons aside, he looks very similar to Michael and they're both models. Could that cause any kind of competition? Could Cormac handle Caro's "sass" that Michael thinks is too much? That said, does Cormac have dogs named Kate and Sawyer, after a two Lost characters whose 'ship never sailed? Because Michael does, and it's easily his best quality.

On the original UK series, sometimes Love Island contestants don't respond well to newcomers and they're almost immediately showed the door if they don't click. However, in the case of Cormac and Dylan, the audience gets the first vote. After Wednesdays episode, those who hopped over to the Love Island app got to choose which girl each new boy gets to join for a date. Please, let them have chosen someone for Caro. It seems like she's going to be upset if she doesn't get to go on one of these dates.

Meanwhile, Dylan is looking for someone to laugh with — which feels more than achievable at the Love Island villa. Maybe he's perfect for Caro. Or Alexandra. While Michael and Alexandra seemed to have worked out a deal to feel things out and stay together platonically so that neither of them get eliminated; either of these two new boys could throw a wrench in that plan.

One of the fun things about new Islanders that may come into play later this season but definitely sets Love Island apart from other reality dating shows, is that they've been prepping by watching the episodes at home. They have that to their advantage. If someone revealed a juicy secret in a confessional, lied to another Islander, or is being portrayed by the dreaded editors as the show's villain, any new Islanders know and can share this information upon arrival.

That's just how it rolls on Love Island. Fingers crossed that Cormac's chance to find love, or make waves, has only just begun.

More like this
'Love Island's Haris Insists Street Fight Video Doesn’t Show Full Story
By El Hunt, Darshita Goyal and Sophie McEvoy
'Love Island' Has Added Yet Another Bombshell To The Villa
By Bustle UK
This Pre-'Love Island' Video Of Olivia & Zara Together Changes Everything
By Bustle UK
Molly-Mae & Tommy Fury Revealed Their Baby Girl's "Really Unusual" Name
By Sophie McEvoy and Sam Ramsden
Get Even More From Bustle — Sign Up For The Newsletter
From hair trends to relationship advice, our daily newsletter has everything you need to sound like a person who’s on TikTok, even if you aren’t.