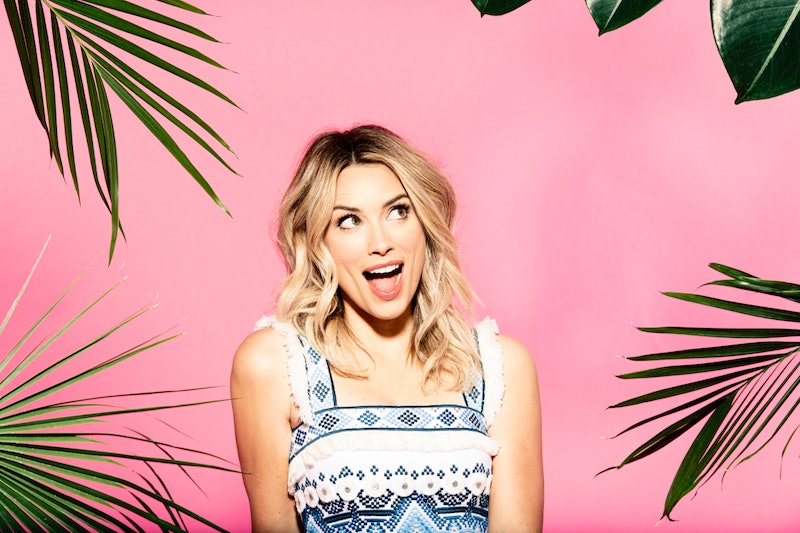 It's time for some summer lovin'. With a hot, new dating show on the horizon, fans will want to be up to speed on how CBS' Love Island works ASAP. Based on the hugely popular UK version of the same name, the series, which premieres on Tuesday, July 9 at 8 p.m. ET, will air a staggering five nights a week. So, with a commitment like that (no pun intended), CBS has you covered with a new video primer.

The network starts with the basics, using Season 4 of Love Island UK as a guide. Five guys and five girls — who CBS promises are "really hot" — meet at a villa. (The U.S. version will be filmed in Fiji, thus giving the contestants — or "Islanders," as they're affectionately called — the perfect setting to show off their six packs.) From there, they couple up, and "just when things are all sweet, someone like this guy comes in," the narrator says in the explainer, as the camera pans to a chiseled man, adding, "and he gets to steal one of their girls." Insert ominous music here.

"And, well, that's when things really get started because if you're not coupled up, you could get dumped," adds the narrator. Said "high tech dumping" can take place via text, by other couples, and "most importantly," by you, the viewer. Despite the whole texting component, however, the Islanders have no contact with the outside world. Their phones only "ping with dates, fun challenges and messages about coupling ceremonies."

"Islanders, Tonight each couple must vote for the two couples who they think are least compatible. Those who receive the most votes risk being dumped from the island tomorrow."

Of course, the twists don't end there. Every few days, more singles arrive at the villa, and — you guessed it — anyone who's not coupled is at risked of being dumped from the island. That coupling isn't always based on romance, however. Sometimes, as CBS describes, "contestants who want to stay in the villa will do whatever it takes to hang in there including coupling up with someone they don't like."

And much like CBS' other summer reality series, Big Brother, contestants are filmed 24/7, so fans won't have to miss a moment of the drama that's sure to ensue. "You even see them going to bed, which is when things tend to get a little wild," CBS explained. "The couples all sleep together in a massive room full of beds. Since they're always hooked up to a microphone, you get to hear every juicy bit of gossip as it goes down."

And all of that voyeuristic info will come in handy, as viewer votes ultimately decide the winning couples — who will walk away with a cash prize — when the show wraps on Aug. 7.

Presiding over all of the coupling and uncoupling will be host Arielle Vandenberg, an actress, comedian, and former Vine star. "As a huge fan of the show, I can’t tell you how excited I am to be hosting Love Island this summer," Vandenberg told CBS. "I’m here for it all... the love, the relationships, the re-coupling... bring it on."

Now that you're up to speed, you can decide for yourself if this will be — as CBS is billing the series — "your new summer obsession."