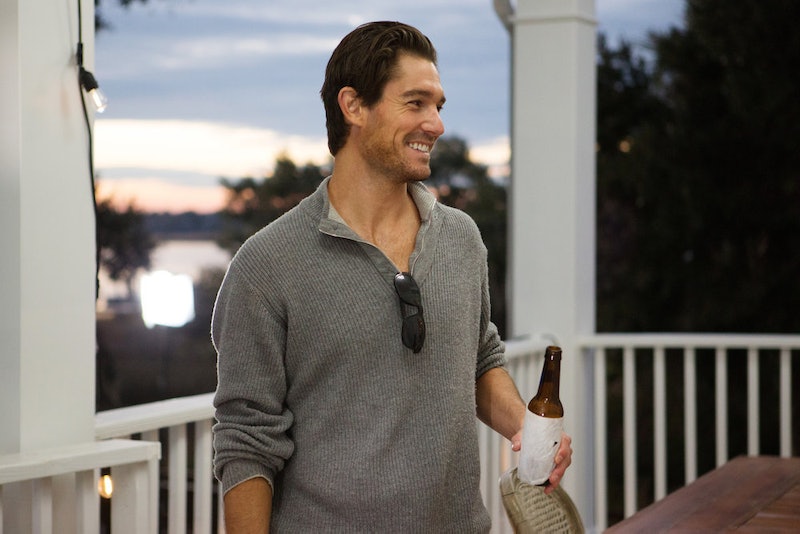 Craig Conover and Naomie Olindo's Southern Charm breakup was hard to watch. And that's saying something, considering that Kathryn Dennis and Thomas Ravenel broke up not once but twice. Oh, and don't forget Ashley Jacobs and Thomas. These were not great relationships. But now that Craig and Naomie seem to have officially buried the hatchet, Naomie has moved on, dating her super-hot doctor boyfriend Metul Shah. But who is Craig dating in 2018? The Southern Charm star has Bethany and his dog, but who else? His true love right now might just be his sewing machine.

On the July 10 episode of Southern Charm, Craig and Naomie finally had a discussion about their long-over relationship — simply because Craig insisted that Naomie couldn't possibly be as happy with Metul as she was when they were together. (Oh, honey.) Now, either Craig is lying about telling everyone he's completely over Naomie or he's only over her when he's sober. Getting over a breakup can be really, really hard, but at least Craig knows he's having a moment.

“After the reunion last year, I realized I clearly had a lot more anger towards Naomi than I thought I was having,” he told People. “The breakup didn’t make sense to me, I just couldn’t … my brain wasn’t really able to make sense out of it.” But it looks like he might be ready to move on.

As far as social media and the internet will let on, Craig is single and it seems like he's ready to mingle. After all, he sure wants Austen to drop Madison so that Craig, Shep, and Austen can hang out like three of Peter Pan's single friends in Neverland. Back in Summer 2018, Instagram pics show that Craig was dating a girl named Larisa, but since she hasn't shown up in many of Craig's pics since, it's probably safe to say that these two have split up. The woman who appears the most often in Craig's pictures is his Southern Charm co-star Cameran, and she's married with a child — so we know that these two are not together. So, there's no one on the horizon, it seems.

And that's OK, because Craig is a little busy with his new company. Remember how Craig sews? Well, he's made it official. According to Bravo, he's launched a pillow company called Sewing Down South. In a statement to Bravo, Craig said, "I want to build a platform and a cool brand for us. Sewing isn’t just something for grandmothers — I mean, they’re great at it! But sewing is a craft, and designing pillows is a form of art and personal expression — at least for me it is."

On the site for the company, you can buy all sorts of Craig-focused sewing projects, so if that's what you're into, have at it.

Who has time for a girlfriend when you're starting your own textile corporation? Craig is single, it seems, and right now, that's what's right for him.

More like this
The Bachelor’s Christina Mandrell Comes From One Of Country Music’s Most Famous Families
By Brad Witter
Brianna Revealed Why 'The Bachelor' Premiere Was Tougher For Her Than You Saw On TV
By Brad Witter
A Guide To All Of Zach Shallcross' 'Bachelor' Filming Locations
By Brad Witter
Joey Essex Is Rumoured To Be Dating A 'Love Island' Favourite
By Sam Ramsden
Get Even More From Bustle — Sign Up For The Newsletter
From hair trends to relationship advice, our daily newsletter has everything you need to sound like a person who’s on TikTok, even if you aren’t.