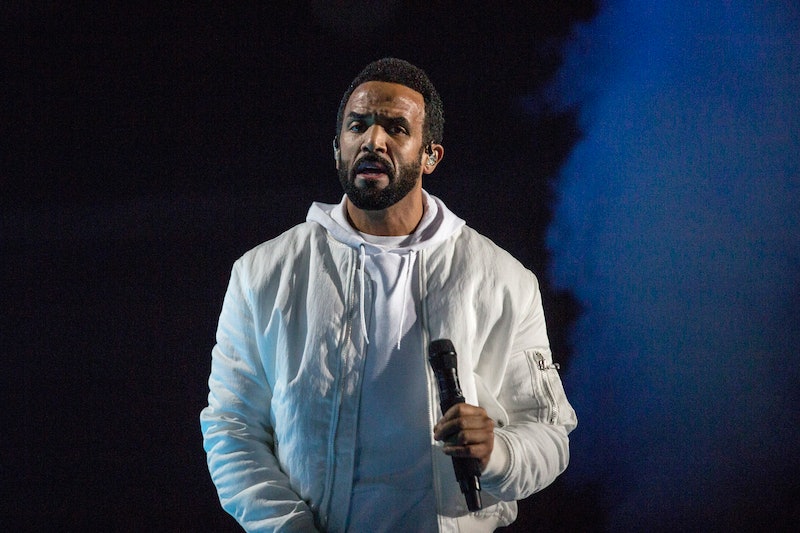 The man, the legend, the Craig David. Having topped the charts in the '90s and early '00s, David's become a British R&B icon, and now he's back for more. In recent years his name's been draped across festival lineups aplenty, and if you've seen this man live, then you probably felt like spending "7 Days" with him too. He'll be making an appearance at the 2019 BRIT Awards, and as ever, he's bound to look super fresh as always. So for the curious, who is Craig David dating?

Unless he's keeping things super lowkey, it doesn't look as though David's with anyone at the moment. Actually, if you believe Twitter, then the man looks pretty single at the moment. He's been sighted several times on dating apps, which some Twitter users can attest to, including writer Dolly H Alderton who tweeted that "I may or may not have right-swiped Craig David on a dating app just in the hope of matching on a Monday, going for a drink on Tuesday, etc," but she never confirmed whether they got to chill on Sunday. I really hope he used that line in his bio.

He was spotted again more recently when a Twitter user posted: "Just seen Craig David on a dating app. And it’s a Monday..." Even when it comes to dating, it really doesn't look as though David can live his "7 Days" down. But can you blame them? That's song's a straight up banger. Of course, there's always the possibility somebody is using David's identity falsely. Bustle reached out to reps of the artist to see if they had any comment on the reports and will update this post if we here back.

While David hasn't been seen with anyone lately, in 2017 he chose to speak on rumours about his sexuality. On Oct. 12, 2017 he told The Sun: "I leave it very open because at the end of the day it’s one of those things where I shouldn’t have to reinforce and state, ‘No, I’m a heterosexual’ — because that’s all nonsense." Well said, Craig. After all, isn't it about time we retired intrusive speculation about someone's sexuality? In March 2018, David also spoke to Entertainment Weekly about his dating life, confirming he was single and telling the website:

"You know when you meet your twin flame. My thing is to never really force it, or to kind of keep looking because it will hit you one time and you'll just now."

He also added that he wanted someone who was "comfortable in themselves. I just want you to be the most authentic you. Not to conform, not to try to be anything different to what you are, because that's what makes you beautiful." Weeping RN.

David's been nominated for a BRIT award for the first time in 18 years, according to The Sun, and he's being considered alongside for Sam Smith, Aphex Twin, Giggs, and George Ezra for the best British male solo artist. While that's some pretty stiff competition, I can't help but root for David, who's sort of the underdog in this category — having been robbed of numerous Brit Awards in his time.

He's received 10 nominations throughout his career — from 2001 until now — but if he takes the award home tonight, it'll be his first. I imagine he's been saving a space for it on his mantelpiece for quite a while now, which is why I'll be hoping that he'll be named best British male solo artist at the 2019 Brits on Wednesday, Feb 20. Who needs someone draped around your arm when you have a Brit Award in your hands, anyway?

More like this
Hugh Jackman Shared The Sweetest Tribute To His “Extraordinary” Wife
By El Hunt
We’ve Got A Text! Another 'Love Island' Series Is On The Way
By Darshita Goyal
How To Follow The New Royal Family Social Media Accounts
By Sam Ramsden
Fans Are Calling For Kim Woodburn To “Return Her Gay Icon Card”
By Sam Ramsden
Get The Very Best Of Bustle/UK