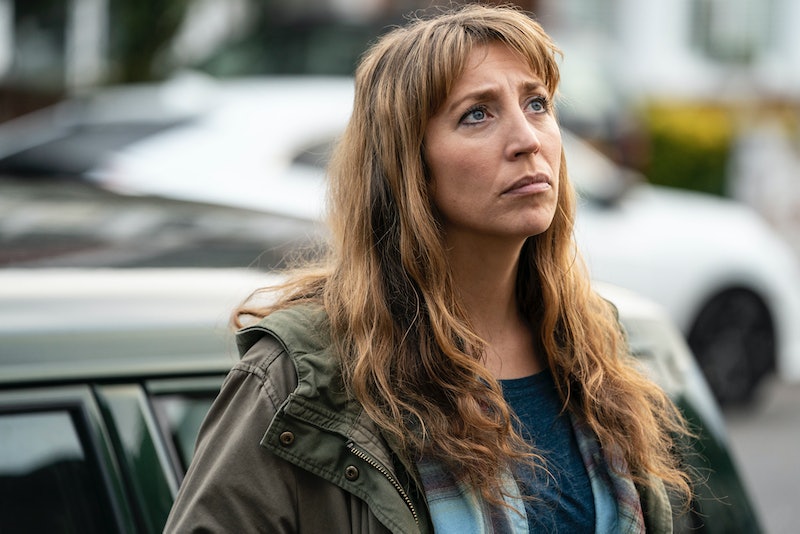 Back To Life is the new dark comedy on the BBC that may just fill the gaping hole that Fleabag has left behind. The new six-part series, which is premiering on BBC 1 in April 23, is about ex-convict Miri Matteson who is trying to adjust to life after being in prison for 18 years. Actor Daisy Haggard plays Miri, and she is also the writer behind Back To Life. But who is Daisy Haggard, and what else has she been in?

Born in 1978, Haggard is no stranger to the entertainment world. According the Guardian, "she is the great-great-great niece of the writer H Rider Haggard, granddaughter of the actor Stephen Haggard and daughter of Piers Haggard, who directed the eerie 1971 horror film The Blood on Satan’s Claw." She is also the youngest of six children.

Haggard made her acting debut back in 1998 in The Ruth Rendell Mysteries on ITV, according to the Guardian. But Haggard probably came to notable fame back in 2012 in the BBC sitcom Uncle. The comedy, which ran for three seasons, was about a retired musician who sparked up a new hilarious friendship with his teenage nephew. Daisy Haggard played Sam, the sister to protagonist Andy King and the mother of his nephew Errol. Speaking to the BBC about her character Sam, Haggard said: "I like Sam. She’s ballsy, quite often unapologetic, good fun. And she wears clothes that I like! She’s been through a lot and come out fighting and is now a good mum and really getting her life back together."

Daisy Haggard has also been featured in some very well-known shows including Green Wing, The Lenny Henry Show, Black Mirror, and Doctor Who, her IMDb shows. She's even one of the lucky few actors to make it into the Harry Potter franchise, SYFY Wire reports, as she played the voice of the lift in the Ministry of Magic. You might also recognise Haggard from the Golden Globe-winning comedy series Episodes, where she played Myra Licht, an unimpressed head of comedy at a TV network, alongside Friends star Matt Leblanc and Green Wing's Tamsin Greig, as the BBC reports.

Daisy Haggard has also had a wonderful stage career. She was in the highly acclaimed play Consent at the National Theatre in 2017, where she played an actor Pip Carter, the Guardian reports. She has also been in The Importance Of Being Ernest, Becky Shaw, and Midsummer Night's Dream, according to her official Royal Court Theatre page.

The Back To Life star is dyslexic, and says this may be the reason she had initial difficulties getting into acting at school. Speaking to WhatsOnStage, Haggard said: "I struggled to get into any school plays because I'm quite dyslexic so I could never do the read-through. I didn't get into one until I was 16 when eventually I got to play Miss Hannigan in Annie. I've given up on everything else I wasn't good at but with acting I've never given up."

All episodes of Back to Life are currently available to watch on BBC iPlayer. The series premieres on Tuesday April 23 on BBC1 at 10.35pm, and will air weekly for six weeks.