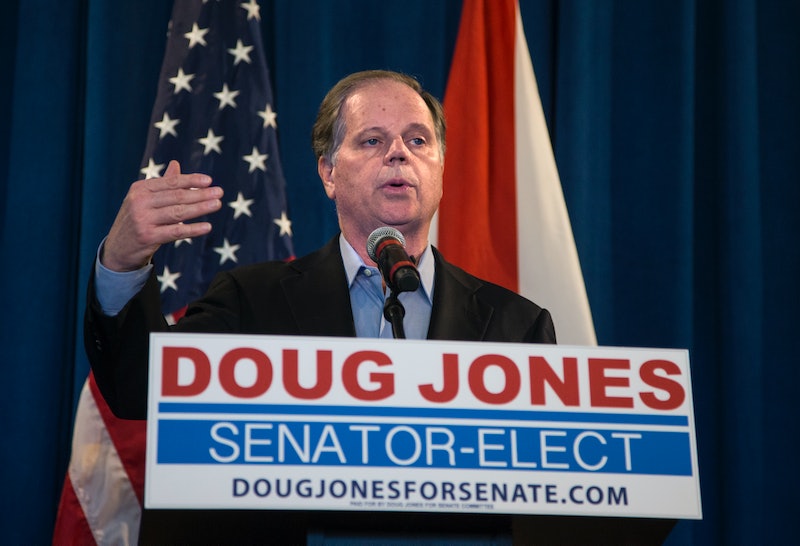 On the eve of being sworn in, Alabama Sen. Doug Jones has named Dana Gresham as chief of staff on Tuesday. According to POLITICO, that makes Jones the only Democratic senator who currently has an African-American chief of staff.

This is the most important position on a Senate Staff.

"I would like to welcome Alabama native & former Asst. Secretary for Governmental Affairs at @USDOT Dana Gresham, who will be joining our team as Chief of Staff," Jones tweeted on Tuesday.

The former transportation official and congressional aide previously served as assistant secretary for government affairs at the U.S. Department of Transportation under then-President Barack Obama. Before that, Gresham was chief of staff to former Alabama Rep. Artur Davis. He also worked as legislative director for Rep. Bud Cramer.

In December, a coalition of more than 16 minority advocacy groups wrote an open letter to Jones, asking him to hire a diverse staff. As the letter read:

A diverse coalition is not only essential in securing electoral victories, but also fundamental in creating policy that fully represents the voices of Americans.

They urged Jones to recognize the "profound lack of racial diversity that currently exists among staff in the U.S. Senate."

The lack of diversity among top Senate staff is not caused by a complete absence of strong candidates of color. ... Hiring at least one person of color to your senior staff in Washington would speak loudly, and we ask that you do so among the qualified applicants that you will receive.

After beating Republican Roy Moore in the Senate race, Jones vowed to promote diversity in his office. As he told CNN's State of the Union:

Jones' decision to hire Gresham has been praised by activist groups pushing him to diversify the Senate. "This is an important moment in the movement to make the Senate truly representative of all Americans," Don Bell, director of the Black Talent Initiative at the Joint Center for Political and Economic Studies, said in a statement.

Currently, only two other senators, Tim Scott of South Carolina and Jerry Moran of Kansas, both Republicans, have black chiefs of staff. And there is still a major lack of representation in American politics — to date, there have only been 10 black senators in the United States. Hopefully, politicians like Jones can help shift those statistics, especially considering black voters are widely credited for his victory.

On Tuesday, Jones named a few other staff positions in addition to Gresham, including Mark Libell, a former assistant congressional liaison for the Federal Reserve Board, who will be legislative director, and Katie Campbell, veteran congressional aide and former adviser to Sen. Joe Donnelly of Indiana, who will be Jones' deputy legislative director. Jones also named Sonceria Ann Bishop-Berry as his transition advisor, another win for minority groups.

According to an April 2015 study on senators' staff diversity, only three out of the chamber's 336 top staffers were black; adding Gresham and Bishop-Berry to that list is a big win.

Correction: A previous version of this story mischaracterized Gresham's appointment. It has been updated to accurately reflect the nature of the appointment.